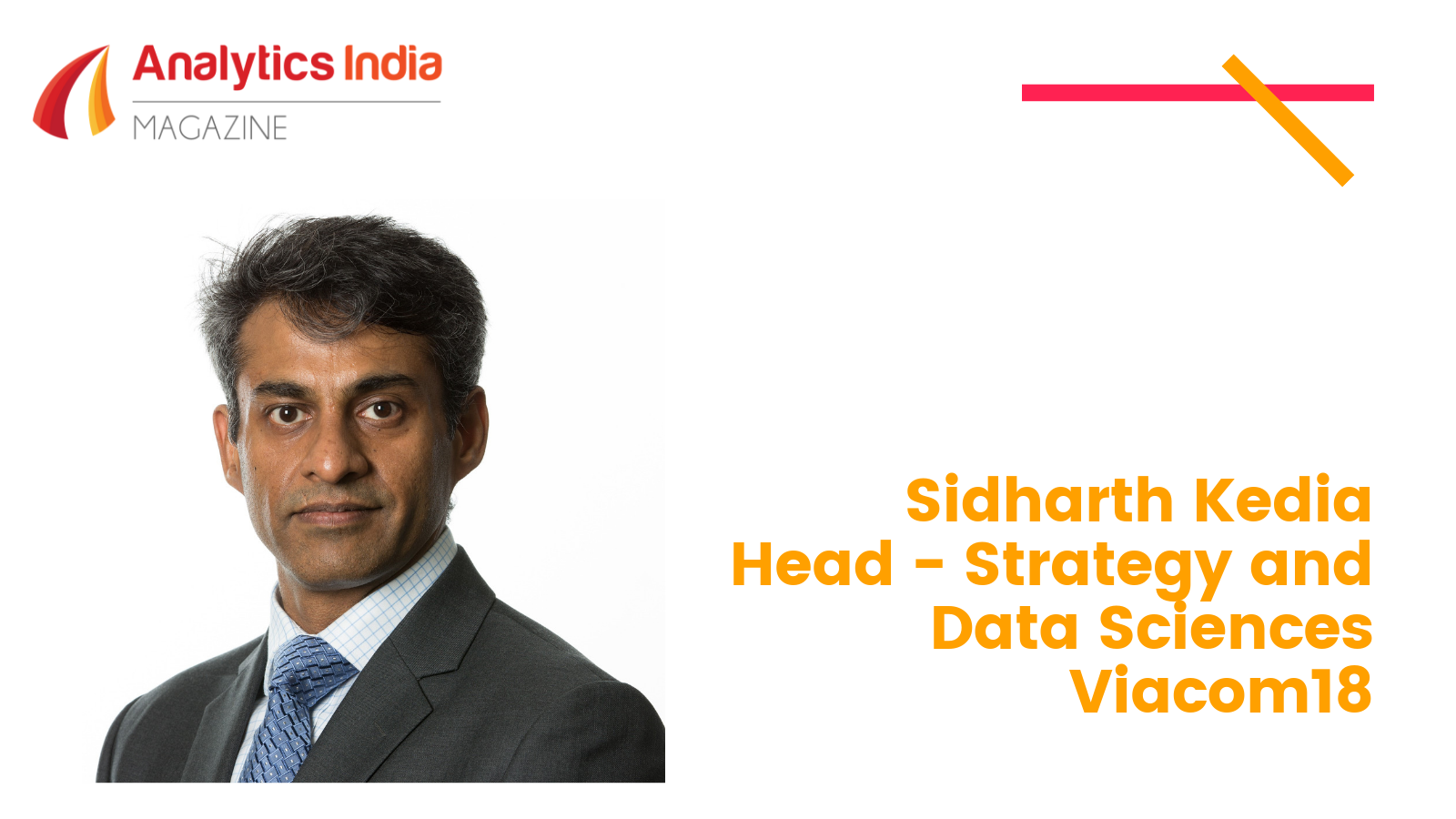 The ability of Data Science to offer unique insights into data is not restricted to traditional IT organisations anymore. With the promise for increasing the efficiency of bottom line operations, analytics has seen a quick expansion and adoption scale in retail, manufacturing, logistics and media sectors.

Service providers across verticals have been baking machine learning in order to gain insights into their processes. Moreover, they also enable finding new knowledge for many different parts of the customer sales funnels.

AIM: How has been your analytics journey so far?

Sidharth Kedia: My analytics journey started in 2000 when dashboards were being digitised by GE and I was fortunate enough to have been part of those initial seeds being sown for what would become one of the biggest and fastest growing industries today and in times to come.

Thereafter, I setup the analytics practice for a BPO, whereby the buzzwords were SPSS, Business Objects, Object Oriented Programming were the buzzwords and most of the front end was developed using .NET. Fast forward to two decades later and now the same world is called Data Science.

Data being generated is of a magnitude difference and hence Big Data. Business decisions have become so complex that it is humanly impossible to model outcomes and hence, the need for machine learning. Even new programming languages (Python, R) and front-end visualisation tools (Tableau and Power BI) have been developed.

The computing power has shifted from local machines to the cloud, giving a fillip to newer business models for AWS, Microsoft and Google. The journey has been interesting, to say the least. However, this is really Analytics 3.0, the way I look at IoT and this is the inception point where the hockey stick will kick in, in terms of the importance of data backed decision making.

AIM: Having worked with startup and now Viacom18, what are the differences you see when it comes to analytics adoption or technical maturity?

SK: The difference between start-ups and a large company like Viacom18 is best described under four distinct categories:

AIM: What are the various analytics solutions that you have developed or worked on?

SK: Analytics solutions that Viacom18 have developed are broadly under two buckets, namely Television and Digital.

In TV, the models largely focus on optimising both viewership ratings and revenue.  In digital, the primary objectives of the business are around customer acquisition and retention. All AI/ ML models are built aligned with these business objectives.

AIM: How did your tryst with media and entertainment begin? How do technologies such as analytics and AI driving innovations or streamlining processes in these areas?

SK: Like any tryst, mine began more as serendipity than by design. In 2007, I co-founded a Private Equity fund, focused on growth capital. While the focus initially was on TMT (Tech-Media-Telecom), it soon became focused on pure play Media & Entertainment as an industry, a practice I built for the fund and was associated with evaluating and investing in media companies for close to a decade, before moving full time into a media company (Network 18 group).

The world of media, as we know it, is undergoing a significant transformation. Like most other businesses, new age media companies have shown that value explosion is unlocked by owning the consumer and knowing his/her media and content preferences at a micro level. This can be achieved only with tools like analytics and big data.

Also, with not only the quantum of data but the extent of unstructured data that is being generated, a meaningful analysis of the same can be done primarily with the help of AI and other tools like NLP. Analytics is increasingly going to be the key differentiator aiding companies in fields as wide as revenue augmentation to customer satisfaction enhancement to cost reduction and in some cases even identifying new business opportunities.

AIM: How are you adopting analytics at Viacom18? Please give some use cases where analytics has benefitted the organisation?

SK: Analytics is being adopted in both digital and broadcast universe at Viacom18. Here are two illustrations in both these universes that are currently being treated distinctly:

Broadcast: Traditional broadcast media’s business model is primarily B2B, whereby the lion’s share of the revenue comes from advertising. Advertisers for most mass channels are looking at the viewership that a 10-second slot delivers and their aim is to maximize their ROI by optimising reach and frequency.

The slot viewership, in turn, depends on two factors, namely – Program viewership and retention of viewers at the time of the break in between a program segment. A break model has been built at Viacom18 that maximizes retention during a break, effectively increasing per slot and overall revenue for the company.

Digital: Voot, the digital offering from Viacom18 is one of India’s largest avods (Advertiser funder Video on Demand) platforms. We have built a machine learning model to look at content affinity amongst other factors and predict age and gender. This model over time has reached a very high level of accuracy and has resulted in significant revenue upside, as a result.

AIM: How are you adopting a data-led approach for content creation, segmentation and targeting? How has it proven to be beneficial in these spaces?

SK: Consumer segmentation and targeting are at the very heart of what any digital OTT platform does and we at Viacom18 (Voot) are constantly building better and sharper models for the same. Our digital recommendation engine is being built on the principle of segmented targeting.

In TV, we constantly analyse consumer preferences and thereafter use a mix of the traditional and digital medium to promote the same. The individual-level data is not yet available for the tv consumers, however, the same is “work in progress”; once available, it will make our tv consumer preferences much sharper and significantly boost our marketing ROI.

AIM: What are the challenges of analytics adoption in the media industry?

SK: There are primarily two challenges that the media industry faces:

AIM: What does analytics and data science hiring scenario at Viacom18 look like? How do you ensure smooth hiring in data science which is often considered a big challenge?

SK: There are primarily two things we are doing to build our hiring pipeline: