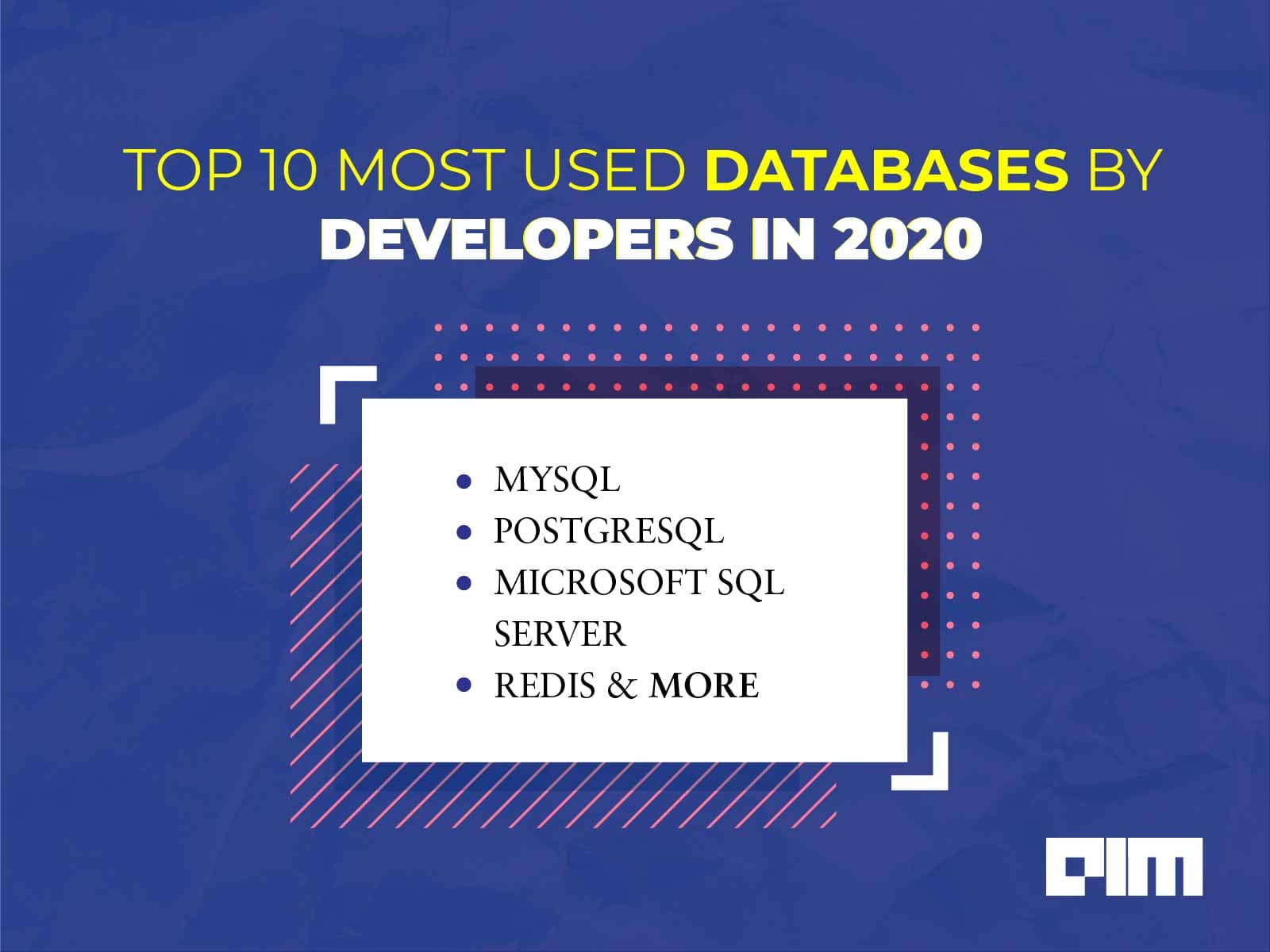 This year, the Stack Overflow Developer Survey surveyed about 65,000 developers, where they voted on their daily-used programming languages, go-to tools, libraries and more. According to the survey, MySQL has maintained the top spot, followed by PostgreSQL and Microsoft SQL Server.

Below here, we listed down the top 10 databases from the survey that are most used by developers worldwide in 2020.

(The databases are sorted according to their rankings).

About: MySQL is one of the most popular Open Source SQL database management systems. Developed by Oracle, MySQL Database Software is a client/server system that consists of a multithreaded SQL server that supports different back ends, several different client programs and libraries, administrative tools, and a wide range of application programming interfaces (APIs).

About: PostgreSQL is a powerful, open-source object-relational database system that includes some key features like reliability, feature robustness, and performance. It uses and extends the SQL language combined with many features that safely store and scale the most complicated data workloads. PostgreSQL comes with many features aimed to help developers build applications. It allows administrators to protect data integrity and build fault-tolerant environments and help manage data.

About: Microsoft SQL Server is a relational database management system developed by Microsoft. The SQL Server 2019 includes a number of intuitive features, such as gain insights from all the data by querying across relational, non-relational, structured, and unstructured data, flexibility to use the language and platform of user’s choice with open source support, scalability and performance to improve the stability and response time of database, and more.

About: MongoDB is a general-purpose, document-based, distributed database built for modern application developers and for the cloud era. It is one of the popular databases which includes both scalability and flexibility. MongoDB is a document database, which means it stores data in JSON-like documents.

About: Redis is an open-source, in-memory data structure store, used as a database, cache and message broker. It supports data structures such as strings, hashes, lists, sets, sorted sets with range queries, bitmaps, hyperloglogs, geospatial indexes with radius queries and streams. Redis is written in ANSI C and works in most POSIX systems like Linux, *BSD, OS X without external dependencies.

About: MariaDB Server is one of the most popular database servers, which turns data into structured information in a wide array of applications, ranging from banking to websites. It is developed as open-source software and as a relational database. It also provides an SQL interface for accessing data.

About: Oracle Database is a multi-model database management system to run all of the workloads more securely, whether it’s on-premises or autonomously managed on Oracle Cloud Infrastructure. There are several intuitive features, such as the database management system that lets a user choose from many deployment options such as on-premises, Cloud@Customer, and public cloud. It helps in building highly scalable applications while supporting all data types including relational, graph, and structured and unstructured non-relational data.

About: Developed by Google, Firebase is an application development platform for building mobile and web applications. It provides developers with adequate tools to develop high-quality apps as well as grow the user base. Firebase gives various functionalities like analytics, databases, messaging and crash reporting.

About: Elasticsearch is a distributed, open-source search and analytics engine for all types of data, including textual, numerical, geospatial, structured, and unstructured data. It is the central component of the Elastic Stack, which is a set of open-source tools for data ingestion, enrichment, storage, analysis and visualisation. The speed and scalability of Elasticsearch can be used for application search, website search, logging and log analytics, application performance monitoring, security analytics and more.