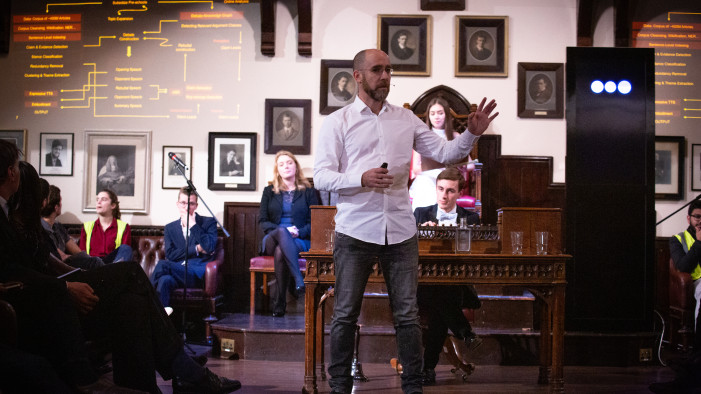 IBM’s project debater made headlines when it pitted its machine against a world champion human earlier this year. Though the machine lost that debate, the confidence of the researchers to put a machine at the helm of a world champion is noteworthy. In case of the debate at the Cambridge Union, the team went ahead and used two machines to debate against each other.

IBM’s debater project is in the news again and this time it has entered the history books for participating in a debate at the University of Cambridge Union, last week.

Speaking in a female American voice to the crowd at the University of Cambridge Union, the AI gave each side’s opening statements, using arguments drawn from more than 1100 human submissions ahead of time.

According to IBM, the whole idea behind developing the Debater is to establish a platform for promoting debates that are more civil. They can be implemented in online comment forums or used by an attorney to prepare for a case by using mock legal debate.

IBM’s debater has been developed over the course of a project and the team has published more than 30 research papers to document and share what they’ve learned.

Cambridge University has garnered a reputation around the globe for its high-quality debates. From Winston Churchill to Bill Gates, the University has hosted many distinguished individuals. This centuries-old event made a giant leap into the future as it hosted two unlikely debaters — MACHINES.

A non-human guest as a speaker in the halls of this prestigious University is a milestone in the history of human civilisation. Reluctant or not, by allowing non-human entities, the world has somehow reluctantly accepted the emergence of intelligence external to human beings.

The topic chosen for debate was whether artificial intelligence would do more harm than good. A wicked smart move as the machines have to list out the advantages and disadvantages of AI.

The evening at Cambridge, began with IBM’s Project Debater’s team lead Noam Slonim, walking the audience through the project details.

After a brief introduction of how the IBM Project Debater came to fruition, the hostess announced a moment of history by saying:

Immediately after that, the machine that looked like a monolith straight out Kubrick’s Space Odyssey, announced that the speech was based on arguments made by the people around the globe supporting the claim that AI will bring more harm than good.

Here are a few snippets from the debate where AI was made to argue for itself:

Both sides of the arguments were made by AI in the form of a speaking monolith, installed at the middle of the hall.

After concluding the speech, the human participants from both sides were allowed to follow up to the arguments made by Project Debater.

Though the rebuttals cannot be blamed for incoherency, IBM’s machine did a decent job in setting up a platform from where other team members can take up.

By doing this, the organisers and the researchers have established an unprecedented tradition of incorporating a neutral player, which is immune to emotions and ulterior motives to begin with the proceedings. The humans were left with rational statements on which they could build up their arguments.

The applications of Debater can be extended to many platforms, political debates with non-human moderator and discussions of other pressing issues.

However, the presence of an entity devoid of emotion can also be cursed with hyper rationalising a decision, which would only prove the above mentioned point of machines incapability to perform well in moral dilemmas.

One possible outcome of involving machines would be the externalising of blame to a non-human entity. Since the participants know that the machine is not prone to any emotions, they are forced to walk a tightrope of rationality without submerging the fundamentals in a deluge of fashionable nonsense.

Centre Plans To Take AI Into Schools Through CodeIndia

DXC Forays Into Recruiting From Colleges: Will Hire 5000 Graduates In India