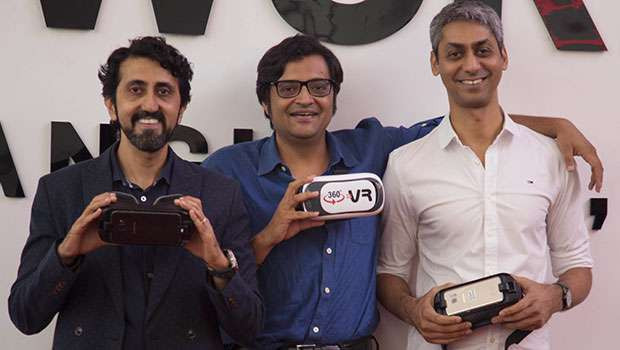 At the recent Zee Melt event, Republic TV’s very own editor Arnab Goswami made an important announcement on behalf of the channel. Republic TV will now feature virtual reality news, a first of its kind VR initiative, undertaken by an Indian news channel. According to Goswami, “The new technology will enable viewers to experience on-ground situation as our reporters bring stories to them.”

With this move, Republic TV plans to strengthen its digital strategy. The channel has essentially resorted to a digital first approach, and is continually innovating in numerous areas. Some of these innovations combine technologies such as cloud computing and VR.

Republic TV’s approach will help them bring new content experiences to their audiences. “It’s a cool way of storytelling because it transports people right to where the action is, without any barriers standing in the way. Besides it also opens up new monetization opportunities for us,” said Jay Chauhan, COO, Republic TV.

No longer a gimmick — VR is here for real

The roots of VR lie many decades back in the past, especially in the early nineties with some of the first versions of VR headsets coming to market. But, today technology has made serious advancements.

The channel has established a distinct division for this, called the Republic World Digital Platform. Goswami led media firm intends to create a three dimensional area in which users can interact with the virtual world in a manner similar to way they do in the real world.

This will be achieved through use of gear fitted with sensors and all other necessary sensing technology that helps simulate reality. Chauhan adds, “Our VR content will be available on RepublicWorld.com, as a new stream and our newly constituted VR Cell built in collaboration with experts from across the globe will begin rolling out amazing VR content in the weeks ahead.”

What will Republic TV’s platform showcase?

Republic TV’s new platform weighs superior compared to some of the live streaming players in the Indian market, which is dominated by the likes of Hotstar. Unlike Hotstar, Republic TV’s platform can showcase full HD video. Besides, they also have a multi-language, highly personalized digital product. Chauhan remarks, “We’ve adopted a data science approach to everything we do from content recommendation to personalization and audience behavior allowing us to directly address each one of our digital audiences. We also have a multi-language, highly personalized digital product.”

The channel has also introduced an industry first “portrait view” as most of the times mobile devices are held in vertical position. Moreover, most social media platforms like Facebook, Instagram, and Snapchat encourage users to view their content in portrait mode. This move is in line with international publications like BBC, The Washington Post, and Conde Nast.

That’s not all, the channel is also leveraging Microsoft’s Azure Cloud platform. Most of the other online media channels like NDTV and India Today rely on Amazon Web Services.

VR can change television viewing in remarkable strong ways, ultimately through one or more of these approaches:

In the last years, stereoscopic 3D television did make a comeback, however, it didn’t fulfill any expectations in terms of sales and consumer reach. This has again led to decline again for 3D television. Besides, 4K marketing initiatives is also a reason why the technology might be fully replaced.

Moreover, virtual reality has brought us to a breaking point, where the technologies help in creating an immersive virtual illusion, aided by other areas of technological innovations. Also, the 4K experience becomes a lot more attractive when used in VR headset technology.

The Times started creating VR editorial and branded content in 2015. It detailed the importance of VR as a key component of its strategic growth. However, the firm plans  to expand its VR distribution beyond its own mobile VR app and onto dedicated VR platforms. This will be accompanied by an increase in VR output across all its properties.

Besides New York Times, many other publishers are also ramping up their offerings to keep pace with the release of high-end VR products. These include The Wall Street Journal, Associated Press, and CNN.

Even though it all seems a bit hastened, but there’s a strategy in place. The publishers don’t want to lag behind the times, missing out on audiences and ad revenue. Besides, VR offers innovative and immersive branded content opportunities, as discussed earlier. These should provide Indian media firms like Republic TV with a cue about  incorporating a robust digital strategy where virtual reality lies at the very centre.

Virtual Reality can change the game for Indian TV

To be accurate, the popularity of VR tech soared in the last couple of years. The technology is not yet mainstream, and will take some time before everyone starts using it. However, VR will definitely transform the way we see television. This is why investments should already be made into the field. Getting ahead of this competition might look tough in the upcoming years, if not strategized well before. The ideal approach would be to take steps based on how you believe the audience would react.

The future of VR-based media

Republic TV is already taking significant strides in this direction. The firm formed a partnership with a Bangalore-based startup which built a custom streaming engine that can outperform off the shelf solutions. “Currently we are streaming on H.264, but are already H.265 ready and as soon as our OVP provider is ready with H.265 support in the next few months, we will roll out the new streaming engine,” explains Chauhan.

The firm is currently scaling up its digital footprint, and doubling down on VR content. It looks forward to making investments for immersive experiences. The channel already has a VR section that caters 360 degree videos. It looks like the firm could very soon be investing towards developing VR experiences for its live content.