Education is considered the fourth necessity after food, clothing and shelter. However in today’s competitive world and especially in a country like India with a ballooning population of over 1.2 billion, education at times is given a higher precedence than the other three. India has always been at the forefront of Mathematics and Science. The concepts of arithmetic, algebra, plane trigonometry, spherical trigonometry, continued fractions have been constant since the time of Aryabhatta

This fascination and at times borderline obsession towards mathematics has continued to this day and it is no surprise that it is still the most preferred and sought after subject in schools and universities. India produces several thousands of graduates in the field of statistics and maths every year and this number is on the rise.

The Indian economy is no longer Monopoly money and is now amongst the largest in the world and is experiencing rapid growth. From the hub of IT services sector the shift is now making India a breeding ground for providing Knowledge based Services – data analytics being one of them. This is evident in Universities in collaboration with some of the top schools across the globe introducing an influx of courses relating to Statistics and Data Analytics to help pump out able bodies capable of combatting the shortage of available manpower. An example being the top tier Indian Institute of Management – Lucknow teaming up with the US based Kelly School of Business to provide courses completely focused around Data Analytics; many other Indian universities are following suit and forming overseas partnerships to offer courses focused around Big Data and Data Analytics

Data is key to decision making and companies worldwide are starting to realize the value these treasures are providing them in a big way in making informed decisions about their business.

It’s no secret that Big Data can transform business; gigantic unstructured data sets are being created, consumed. However, the sheer volume of data is not the issue that organizations face today. If it was so, this would be just be a computing problem. It is the unstructured data and extracting business value from this data that is beyond the reach of traditional enterprise tools and business practices.

According to a McKinsey study, the US alone would face a deficit of 1,92,000 data scientists against its requirement of 4,90,000 by 2018. A shortage of the analytical and managerial talent necessary to make the most of big data is a significant and pressing challenge and one that companies need to address.

Keeping this in mind, many fortune 500 firms like Microsoft, Citibank have already started to leverage India and the Indian talent in this domain in gaining mileage well ahead of its competitors.

There is a whopping 600,000 students of science and maths graduating every year. India sees more than 2.3 million graduates and nearly 750,000 post-graduates every year, it is not uncommon to see candidates with two Master’s degrees. With a growing Demographic Dividend, India’s large young and blooming masses constitute nearly seventy percent (70%) of the country’s total population… Now that’s a lot of brain power, Big Data is India in every sense of the term!

While many US firms were initially hesitant to work with an offshore provider, sourcing to India is no longer a taboo, it now makes sense.

Data Science in India is no longer a cheaper alternative but in reality a Big Fish comprising of bright minds and massive amounts of intellect. 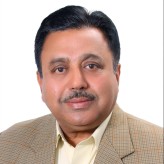 Venkat is the Founder & CEO at LatentView Analytics, based out of Chennai (India). He is the alumnus of IIT, Madras and IIM, Calcutta. Entrepreneur with significant offshoring/outsourcing experience, guiding Fortune 500 organizations to achieve their business objectives. Leading a venture with a focus on analyzing and modeling data for solving business problems relating to Marketing, Risk and Customer Management.