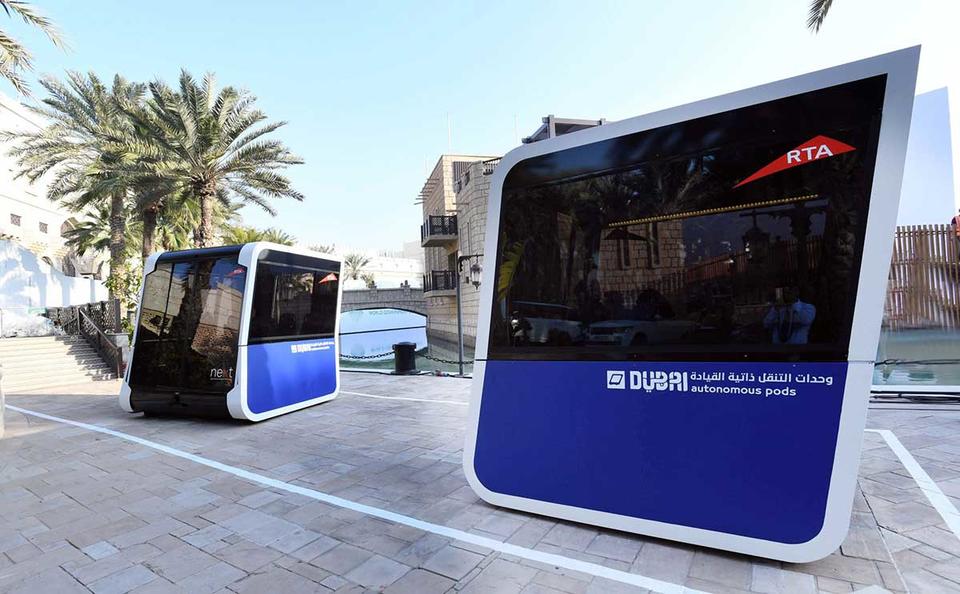 A development that came at the recently held World Government Summit, Dubai’s Roads and Transport Authority (RTA) has launched the first on-road tests of the world’s first autonomous pods, that has been developed in cooperation with Next Future Transportation.

Designed to travel short to medium distances in lanes dedicated to these pods, they can be coupled together with other pods or ‘modules’, in as little as 15 seconds, and can also be detached with an equal ease. Each of these modules can fit 6 people sitting and 4 people standing, also allowing to walk freely in the coupled modules.

Each of them is fitted with cameras and electromechanical technologies that help in coupling and detaching, which can be activated while the pod is in motion, based on smart routing system that automatically drives the vehicle and joins them based on traffic, congestion etc.

With an average speed of 20 kmph, 2.87 meters in length, 2.24 meters in width and 2.82 meters in height, it weighs around 1,500 kilograms. It comes fitted with a battery that can support three hours of hassle free operation and can be charged in six hours.

This comes as a part of the effort led by the city to transform Dubai into the smartest city in the world. The pilot test of driverless units has been directed by His Highness Sheikh Mohammed bin Rashid Al Maktoum, Vice-President and Prime Minister of the UAE and Ruler of Dubai, and RTA is equally ambitious in contributing to the development of the city and aim to provide autonomous transport best suited to Dubai’s climatic conditions.

Testing of autonomous modules comes as a part of Dubai’s larger strategy to make 25 percent of all journeys in Dubai autonomous by 2030. With the success of the initial tests, the city aims to bring a breakthrough in transportation systems, to offer mobility in more innovative yet convenient ways.

The company’s website explains that the autonomous pod can be booked using Next App. It also comes with three protection systems—comprising 3D cameras, standby system based ordinary cameras and the last one operated manually by operator, ensuring full control to avoid accidents and road mishaps.

Are Flying Cars Going To Be The Next Big Thing?