Since its highly-publicized launch in 2015, the non-profit OpenAI backed by tech billionaire Elon Musk and YCombinator’s Sam Altman has gone from strength to strength in artificial intelligence breakthroughs.  Their latest research — Robots that learn teaching robots to learn like humans form the backbone of the general purpose robotic systems that they are developing at OpenAI.

The major breakthrough is through one-shot imitation learning algorithm that enables robots to learn a new task through a single demonstration. In this case, the demonstrator can communicate the task by doing it in VR. According to Josh Tobin, Member of Technical Staff, Open AI, the central premise behind the algorithm is that “imitation allows humans to learn behavior rapidly”.

“We have built a proof of concept system and trained it highly in simulation. We teach the robotics new task by demonstrating building towers in a particular way,” said Tobin.

Tobin demonstrates how robots can learn a new task after demonstration:

“To train the network we use only simulated data using domain randomization to learn a robust vision model. We generate thousands of different object locations, light settings, surface textures and show these examples in the network. After training the network, robots can find the block in the physical environment,” Tobin says. 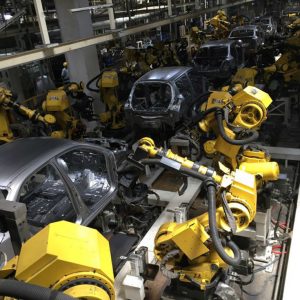 OpenAI’s latest, groundbreaking research has sparked another debate of how robots can take over mundane, human jobs and reshape economies. There is already growing body of concern on how robots can outperform human counterparts in repetitive tasks. Automation has brought a wave of retrenchment across the globe with major IT companies announcing rollbacks. But not all is gloom and doom.

Bots booted out in manufacturing: Last year, German automotive giant Mercedes grabbed global headlines when it announced its ending the reign of robots on its production line and bringing back humans, for the level of individuality. Since customization is key to modern customer, Mercedes trumped bots over manpower to safeguard the future of its employees.

Assistive robotics eldercare: Another trend rearing its head the assistive robot — that can sense, process sensory information, and perform actions that benefit people with disabilities and seniors. The Eldercare-Assistive Robots Market is gaining widespread acceptance and a UN data cites that the global over-65 population is set to grow by 181% and will account for nearly 16% of the population by 2050.  Assistive robots are targeted at the ageing population and is pegged to expand the robot base, surpassing the numbers in industrial settings.

Carnegie Mellon University researchers have created robots and assistive technologies for elder are and people with disabilities at the Quality of Life Technology Center (QoLT). The quirkily titled project   Home Exploring Robot Butler can perform few tasks such as retrieving items and playing interactive games and even dishing out Microwave meals.

Food tech, robot power cafes & robo deliveries: Another sector where robots will be making a splash is the food industry. Bots have long been deployed in production but they can be leveraged for product consistency checks and improving efficiency.

Robotics will be used in areas where it makes sense technically and economically. More complex tasks will be automated and collaborative robots will help humans work more productively. Henry Hu, Founder of Café X, America’s first robot-powered café can crank out 100-120 coffees per hour. Hu believes cloud connectivity is an important breakthrough for robotics and will help bots become even smarter. “The robots can communicate with each other and make adjustments to their programs to be more efficient. In the next five years, I think we’ll continue to see cloud connectivity thrive and the  ability of robots will also improve,” he said reportedly.

Again an offshoot of CMU, Snackbot delivers snacks to visitors and students on the CMU 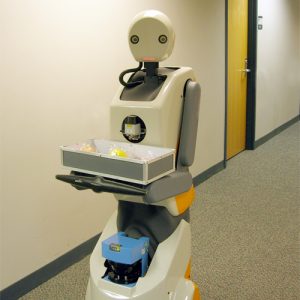 campus. The bot is developed to support research in design and Human-Computer Interaction (HCI) through sound, motion, and form for human-robot interaction. It is powered by multi-sensor fusion algorithms for perception, reasoning about dynamic spaces, communicating with people through verbal and non-verbal mechanisms, and planning with incomplete information.