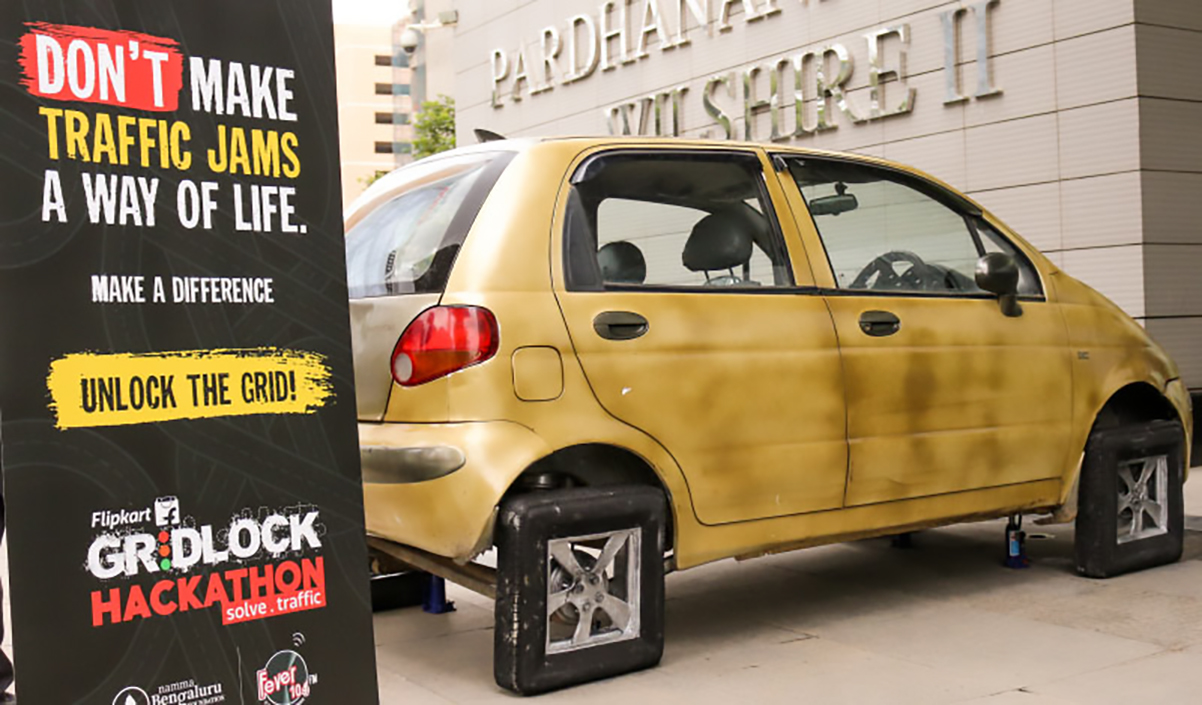 Traffic is an ever growing menace that almost all the popular “IT hubs” of India are continually facing—Delhi, Bangalore being the worst affected. Talking about Bangalore, once the city of lakes, gardens and a soothing weather, is now a city of overloaded vehicles with fuming fuels. While the traffic experts—meaning our respectable traffic police have been doing their best to have a control over it and facilitate a smooth sailing across the city, the efforts are far from yielding any desirable results.

And why talk about it here? Well, to bring a data science and analytics angle to solving the traffic chaos! If you are wondering how, let us introduce to you the Gridlock Hackathon. This recently concluded hackathon organized by Flipkart, was arranged with an aim to find a technology that could solve Bangalore’s traffic congestion. And it turned out to be a huge success as the ideas from all across the city flowed in, in the form of NoHonk, RushHour, CitizenCop and other interesting project names.

A challenge which was announced as a part of ‘Month of Innovation’ by the company on its 10th Anniversary, it received more than 400 entries from countries such as US, Dubai and Bangladesh, apart from India. Some of the companies that participated were ISRO, Mercedes Benz R&D, Amazon, Amazon Web Services, Accenture, E&Y, McKinsey & Company, Ola Cabs among others.

What’s to gain from the hackathon?

As a part of the competition, participants had to use artificial intelligence and machine learning models to create solutions that integrate different systems to make traffic smooth and manageable. With a prize money of $5,500, the online contest was a way to crowd source solutions for Bangalore, which is grappling with unplanned roads and overpopulation. The technology boom that the city witnessed a decade ago has taken on its road and traffic conditions.

Ideas that were welcome in the form of artificial intelligence, big data or anything out of the box that could give a solution to the over growing traffic, that reportedly is also affecting the overall GDP of the city, with traffic jams directly shoving about 2 percent from the city’s estimated GDP of $30 billion.

The Flipkart CEO, Binny Bansal believes that the city has the potential to be a world class business and social destination, only if its traffic menace is addressed.

Suggestions that poured in-

From AI to IoT, the hackathon had suggestions pouring in from all the domains. There were entries that suggested that internet of things powered road dividers could change the orientation to handle changing situations to those that suggested having a reporting system that tracks vehicles that don’t comply to rules. Another interesting input was in the form of having a device that could track social media to generate traffic reports and a network of smart satellite that could direct in the ease of flow of vehicles. There were few suggestions around implementing cloud services.

What the winning team says-

The hackathon which was won by the team Affine Anonymous wants to take into consideration the traffic volume before they turn red, amber or green, with the help of real-time traffic feeds from Google and Bing Maps Vision.

The project called TrafficSense, has envisioned the creation of a network of self learning and communicating traffic signal nodes. They suggest that the solution will be able to reduce the waiting time at the city’s most crowded junction- Silk Board, by 17%.

The hackathon, which comprised of jury in the form of  Flipkart CEO Binny Bansal, Namma Bengaluru Foundation CEO Sridhar Pabbisetty and DCP (East) Abhishek Goyal, had an active participation from all across the city and most of the solutions saw the intervention of latest technologies such as big data, artificial intelligence, IoT and cloud in its overall implementation. With these disruptive technologies becoming a thing for all the industries, we await to see more on the traffic management side.