With this new role, Hitesh looks to strengthen iNeuron’s technology capabilities to handle millions of leaders, alongside expanding the team. 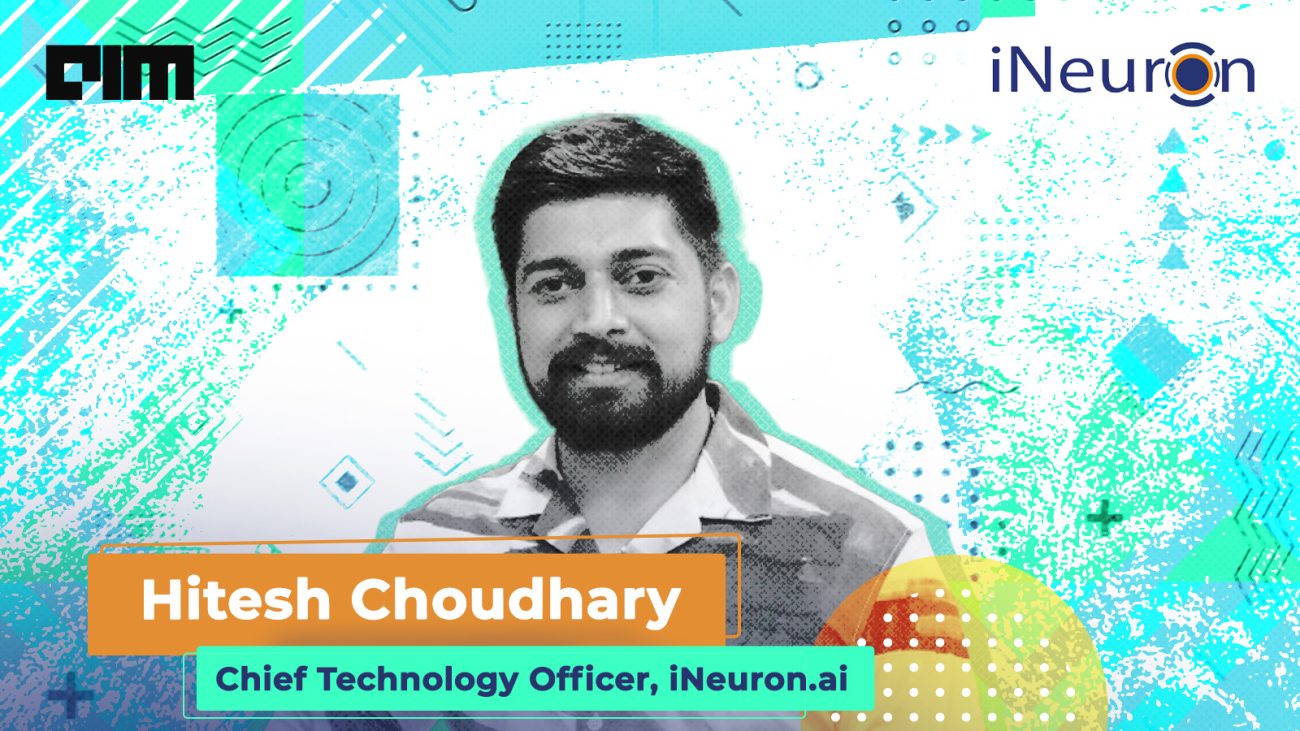 One of India’s leading edtech startups, iNeuron, announced that it had appointed Hitesh Choudhary as the chief technology officer. With this new role, Hitesh looks to strengthen iNeuron’s technology capabilities to handle millions of leaders, alongside expanding the team.

Hitesh is one of the top influencers in the field of web and mobile development at production level. He has been instrumental in creating educational content in programming, the latest tech, new frameworks, open-source products, etc. “Making videos is a part of me, and that is not going anywhere,” said Hitesh when asked if he would continue making videos for his users/subscribers on YouTube and other online platforms.

Consistency is the key

Sharing his journey with AIM, Hitesh said that there are many incidents that he has encountered along the way. “You meet a lot of people on the road and in restaurants when you have 700K subscribers and 300K registered users,” he added.

He said he transformed a potato peeler guy from Thailand into an app developer. Also, a 40-year-old dad in Canada moved into a web developer role via his courses. In another instance, after getting a package of 40 LPA, one of his students showed up at his house to thank him from another part of the world. “Over the years, I got just one learning, just put in the honest work and be consistent,” said Hitesh.

Founded in 2019, iNeuron was founded by Sudhanshu Kumar and Krish Naik. In a short span of time, the company has emerged as one of the internationally recognised training institutes in the country for data science, machine learning and deep learning.

iNeuron chief business officer Uday Mishra told AIM that iNeuron is on the verge of acquiring 100 percent stake in Learn Code Online, the brainchild of the YouTube creator, Hitesh. The entire deal is expected to be an all-stock deal. With this acquisition, iNeuron gets access to 20 colleges overseas, and over 100 universities in India and abroad.

Now with Hitesh joining the team, the company looks to scale to new heights. “When you move from individual to team, things scale up a lot,” said Hitesh.

The talent crunch in India is for real. India’s tech industry talent pool stands at 3.8 million in FY21. As per Nasscom, India ranked globally, next to China, with a 2.14 million annual STEM graduate supply. Fascinatingly, 60-70 per cent of digital talent gained by India in FY21 was through reskilling. Study shows that India has about 2.32 million digital/future skills jobs, out of which only 27 per cent are unfulfilled. Moreover, there are about 3 lakh jobs in AI and Big Data analytics, of which 88K (i.e. 30 per cent) are unfulfilled.

Solving the talent crunch in India, Hitesh said that they are hiring a lot of their trained students directly as they believe they can build a team for them. “The entire iNeuron tech team got trained from my courses and are now helping to scale. Now we are tying up with organisations to provide the talent that can work for them on day one,” he added.

Hitesh said that the current tech team is very talented, and they are handling a lot of things. “I want to bring in more talent and reduce the load in a structured way where communication is a key priority. In addition, I want to give more freedom to the tech team,” he added.

Further, he said that he understands the tech community very well; they are already very self-driven; you just need to give them structured requirements and reasonable time.

“There is no strong need for leadership in the tech department. Developers are self-driven,” said Hitesh when asked about his leadership style. However, he said you need to understand one thing in tech: ‘developers never want to ship bad or low-quality code. Just give him enough time to write quality code.’

“Sometimes they just need a motivational boost and a person to talk to who can understand their tech jargon, and I am a perfect fit in that,” said Hitesh.

“I am revamping the entire platform,” said Hitesh. He said that this new platform would give students a seamless experience in learning, getting support and will be able to learn from any mobile and web devices. “We will make the platform highly scalable and easy to use,” he added, saying it would be publicly available in a month.

Further, he said that their tech team would support the teachers so that they could produce high-quality courses. “Five years or one year, our vision is to provide high-quality courses at affordable prices. And yes, there is a lot in the pipeline, and we are almost at the end phase of it,” he added.

“iNeuron is an ed-tech company, not a marketing company,” said Hitesh. He said, here, everyone understands the value of education. “Education is not just a product to sell. It is a lifelong experience for students, and these students don’t have millions of dollars in their bank accounts. At iNeuron, everyone is aligned to contribute to ed-tech with real values,” concluded Hitesh.