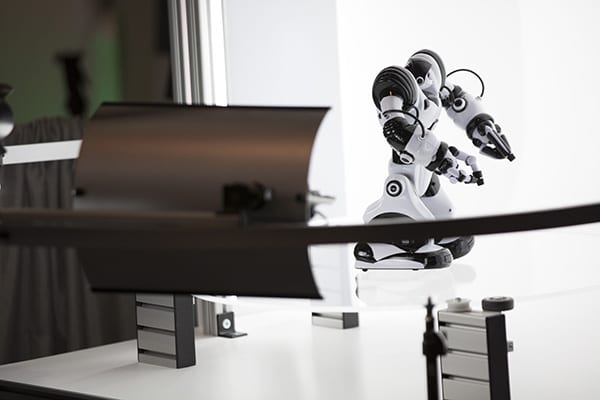 Before CES took a centre stage at Las Vegas this year, there were already speculations of AI and robotics making a key appearance at the event. And, keeping up to the high expectations, the Consumer Electronics Show revealed a plethora of new products, software and services in this area from the key technology players.

Artificial Intelligence has become the key ingredient of almost all the major developments in the recent years. CES 2018 recognised this emerging space by introducing AI category for the first time in CES Marketplace, where thousands of companies exhibit new products. With an aim to exhibit applications of AI in areas such as automotive, health, home, robotics etc., self driving cars, CES featured Artificial Intelligence Marketplace and conference tracks on AI.

One of the world’s largest tech conventions was seen boosting the latest innovations in AI infrastructure and computer systems. As the website mentioned—from big data analytics and solutions, speech recognition, learning and decision-making products to predictive technology, the AI Marketplace showcased revolutionary data models and solutions that will shape the future of businesses.

Some of the leading technology players across the globe were exhibitors at artificial intelligence marketplace—Baidu, Aeolus Robotics, Backyard Brains, Horizon Robotics, NovuMind, Yamaha Motor, being a few.

Other tech parallels that drew major traction at CES  2018 were robotics, augmented reality, drones, 3D printing and others.

From AI themed panels to AI talks that grabbed an eye

A culmination of software, algorithms and sensors, AI was the real star at CES, which was also indicative of how CES has evolved over the years from being a venue for tech companies to launch their products to turning into a showcase for emerging technologies like artificial intelligence.

It had conference tracks dedicated to AI, featuring speeches and roundtables from how businesses are putting AI to work to the effects that it will have on humans, both as consumers and workers. There were talks on impact and future of AI, concerns about AI, how AI is rapidly changing the way we work and live, insights into the future of AI, examining recent development, current applications and concerns about AI, roadmap for self driving cars and others.

This year’s CES presented some of the most defined applications related to AI such as image recognition and deep learning. From LG launching their robots to Samsung revealing smart refrigerators, there were a plethora of AI and robotic developments that took a centre stage. Some of the AI trends that deserves a mention are:

Though autonomous vehicles still have a long way to go before they become safe and properly regulated, the companies aren’t shying away from developing solutions in the space. With car companies demonstrating their developments in AI to NVIDIA talking about its partnership with Uber and Volkswagen, there was a lot to be consumed on self driving cars facilitated by AI. Some of them demonstrated features like ability to pay for parking, gas through a dashboard or cameras that enhance a driver’s side and rear vision.

Companies like Samsung launched its smart refrigerator that can listen to voice commands to control other home accessories. It also showcased an updated version of its assistant, Bixby. This AI assistant is similar in many ways to Siri, Alexa, and the Google Assistant and the company plans to incorporate this tech into technologies like televisions and even refrigerators.

There were a lot of sessions focusing on Alexa, covering topics such as building smart home with Alexa, art of talking to Alexa, integrating Alexa voice into other products and others. Google also showcased its own Assistant quite fervently at CES.

Companies gave a progress report on the so-called 5G, the fifth-generation network technology, which has gained major traction since the rise of artificial intelligence.

CES 2018 saw a throwback to “retro futuristic” robots that combine contemporary tech with 20th-century aesthetics. Laundry-folding robots, robot dogs, and even a robotic smart home manager named CLOi by LG made an appearance. It is designed to work in airports, hotels and supermarkets. Sony’s Aibo is a robot dog that has been reborn for CES 2018.

Some AI product launches at CES 2018

It hosted a variety of AI image recognition and learning examples. Few gadgets that were unveiled at the Consumer Electronics Show in Las Vegas with an AI play are:

Japanese electronics company OMRON has created an AI-equipped robot that demonstrates how machines can work in harmony with humans. It uses AI, sensing control, ML and robotics to create FORPHEUS. The three camera system on it is used to identify ball, players and trajectory.

This smart baby monitor camera recognizes if a baby is breathing and sends real time data and alerts. It has sensors for humidity, temp, sleep analytics, and alerts if the baby is crying. The Cocoon Cam Clarity uses computer vision to track a baby’s sleep and wake patterns, growth and other behaviors.

This AI-powered iPad app uses machine learning to monitor and track how you play, comparing the results and provide an assessment. It works with The One Smart Piano, and the AI can tell if you playing with accuracy, good rhythm etc.

It brings Alexa to your car dashboard, using voice recognition. This voice enables controller for car can follow commands like play, pause, skip etc. It works with Bluetooth or the Aux in port.