Teaching Is The Best Way To Learn Data Science, Says This Data Scientist 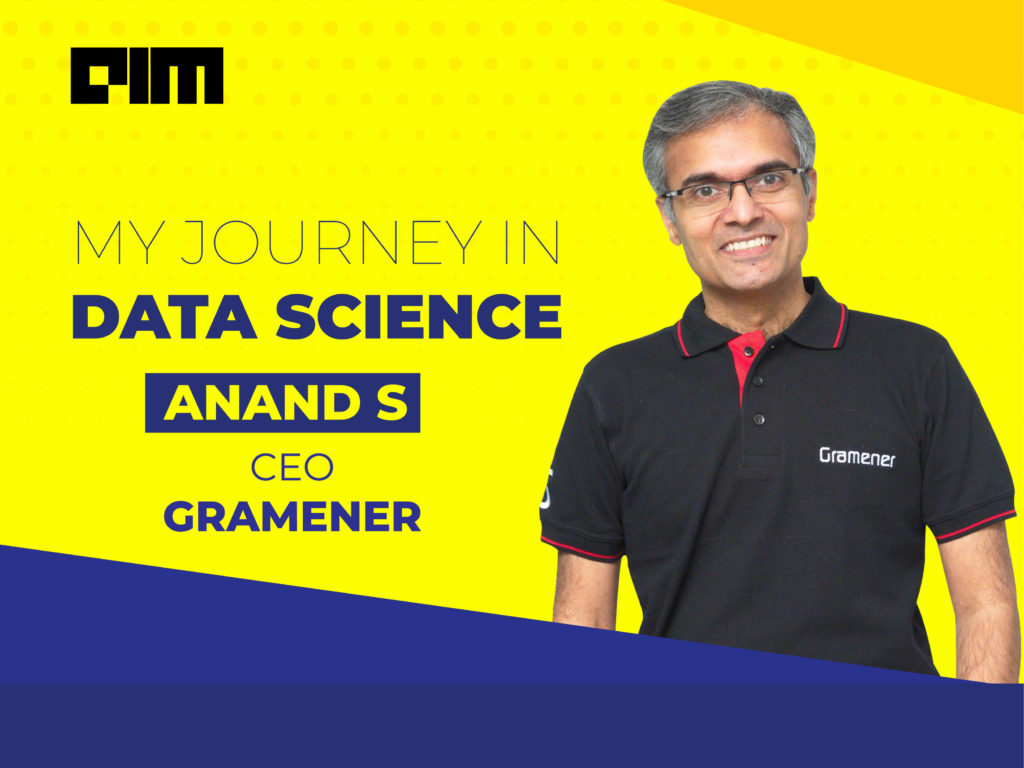 In the ever-increasing data science landscape, learning and retaining concepts have become difficult as one fails to dig deep and assimilate various data science approaches to its fullest. This is because data scientists do not evaluate their understanding of different concepts. However, there are numerous ways one can put their knowledge to the test, and one such method is teaching. To assimilate several best practices in data science, every week, we interview data science leaders who are an inspiration to aspirants and help learners make effective career decisions.

In this edition, Analytics India Magazine got in touch with Anand S, CEO at Gramener for our weekly column My Journey In Data Science. Anand has over 24 years of experience at some of the most prominent companies, such as IBM Global Services, The Boston Consulting Group, and Infosys Consulting, at various roles — ranging from consultant to chief data scientist and CEO.

In 1996, Anand completed his B.Tech in chemical engineering from IIT Madras. In the same year, he joined IBM Global Services as a programmer and worked there till 1999. Following this, he completed his MBA from IIM Bangalore in 2001 and joined The Boston Consulting Group as a consultant. However, Anand said it was only during his MBA days that he was introduced to analytics and visualisation while doing his second-year project in 2000 on behavioural finance using bonds data, which was 700 MB in size.

“In this project, both my statistics and programming skills came in handy. I learned statistics in college and had started programming when I was in seventh grade,” says Anand. On gaining insights into the historical data, Anand was fascinated by how he could analyse human behaviour with it. He figured out that younger analysts were less accurate than older ones. But another staggering insight was that the former were less biased than the latter. Besides, he also revealed that financial analysts used to manipulate the rating by lowering the estimates of a company, and when the financial results were declared by companies, it used to be higher than the expected value, resulting in the surge of the stock price.

Since Anand joined a consulting firm post-MBA, his work involved the use of analysis and visualisation techniques. He used to explore the simulation of employees, staffing level, cost optimisation, among others. However, he described a project that he was a part of in 2004, which required them to do text analysis of bank statements.

“We had to analyse every single customer’s data for the nationalised bank. Getting the data was tough and doing text analysis was even tougher. But, we were able to identify customers who were also banking with the competitors,” explains Anand.

Consulting can be done either by having a strong understanding of the domain or a strong understanding of the data. Anand, in spite of a lower domain understanding, was able to collaborate with the team in the decision-making process with his analytical skills. After four years at The Boston Consulting Group, Anand joined Infosys in 2005, where he worked for more than six years. However, it was completely technical consulting and had a little to do with data. But, he continued to learn analytics and visualisation as a hobby.

It was around 2009 when he felt that he should fully commit to data analytics. Anand was passionate about the potential of data even before the word ‘data science’ was coined, which happened in 2011.

Anand was always ahead of the curve when it came to learning and getting into data science. However, he knew that no company would hire him for analytics and allow him to follow his passion the way he wanted since data science was not a thing in 2009. Consequently, his strategy was to start a company and get it onto the course of data science.

“It was an unusual strategy, but even today, it is a viable option for aspirants,” believes Anand. “And not just a viable strategy, but also something aspirants should think pretty hard about,” he adds.

Ardent about starting a company, Anand along with his former IBM colleagues, laid the cornerstone of Gramener in 2011. However, the company’s core was not data science; it was focused on energy management and rural BPO. It took Anand another year to convince his co-founders that data is the next big thing. And by 2011, Gramener became a data science company.

Anand, in his college, used to teach statistics to other students. Teaching had helped him not only when he was a student but also as a professional. “Teaching others allows you to learn more. When I used to teach, students used to ask difficult questions for which I had to do research and find answers, thereby helping me gain more knowledge,” says Anand. “Even in my professional career, interacting with clients is vital as they demand various results, which, in turn, motivates me to find answers through data science techniques. All of my learning always comes from doing,” he adds.

Since Anand was one of the pioneers in the data science landscape, he, along with his team, devised a data visualisation course in collaboration with an IIIT institute in 2013. However, Anand never had the opportunity to learn from online courses when he started. Whenever he got stuck or needed a solution, he used to read research papers and at times, create his own algorithms like group names and more.

Talking about one of the successful projects, Anand said how they associated with other organisations to analyse the 2014 Lok Sabha election. The initiative was more focused towards pre, live, and post-analysis of the election. And his worst experience revolves around people asking inane questions about data science. For instance, one of the banks from the Middle East reached out to him for carrying out big data analysis and forecast the sales with just three data points.

Besides, while hiring data scientists, Anand evaluates applicants foundation skills and prefers aspirants who have done certifications but do not look for PhDs candidates. He said, PhD applicants have a research mindset; however, we need an application mindset because we rely on quick results. PhDs are focused on depth to improve the technique approach, take multiple routes to get there. For time-bound problems, they are not the ideal candidates. We do not seek people who can create algorithms, want someone who can use these algorithms to quickly solve the problems.

Anand had a couple of advice for aspirants and professionals who struggle to find success in the competitive landscape. He suggests one should primarily focus on building a foundation and creating a portfolio using whatever data they have. However, just finding insights does not work; one must go a step further and say what should be done to improve the outcome.

In addition, he stressed the importance of teaching others. “If you can communicate the learnings to others that means you properly understand the approach or techniques, which brings confidence,” concludes Anand.