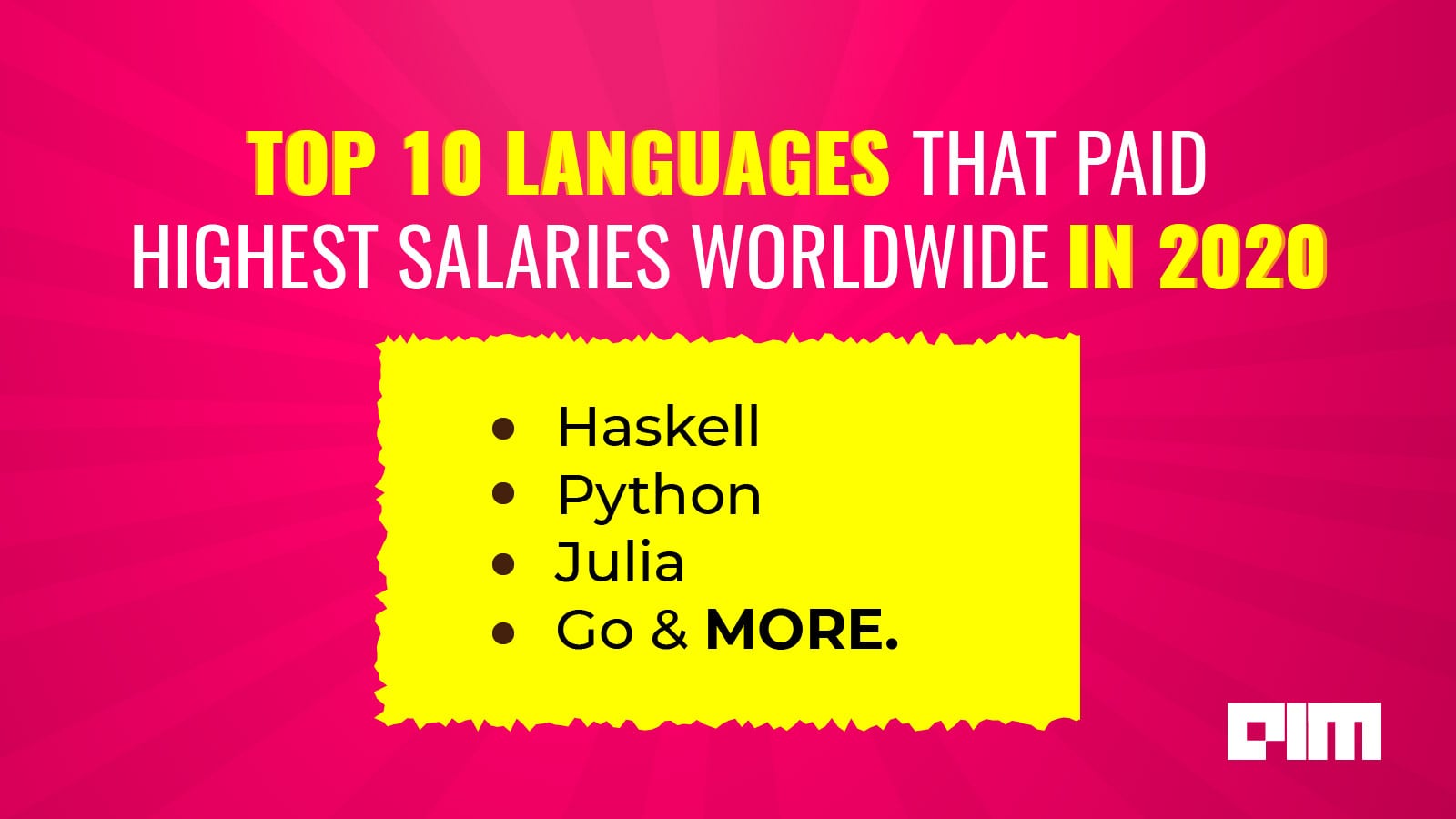 Recently, the Stack Overflow Developer Survey 2020 surveyed about 65,000 developers, where they voted on their daily-used programming languages, go-to tools, libraries and more. The survey stated, “Globally, respondents who use Perl, Scala, and Go tend to have the highest salaries, with a median salary around $75k. While looking at US jobs only, Scala language developers tend to have the highest salaries.”

Here, we list down the top 10 programming languages from the survey that paid the highest salaries worldwide in 2020.

About: Bash is a “Unix shell”: a command-line interface for interacting with the operating system. Shell scripts are usually used by the developers for various system administration tasks, for instance, performing disk backups, evaluating system logs, and so on.

About: Go is an open-source programming language that helps in building simple, reliable, and efficient software. The language is expressive, concise, clean and efficient. It can carry tasks such as garbage collection.

About: Haskell is an open-source, purely-functional programming language that allows rapid development of robust software. The features of this language include strong support for integration with other languages, built-in concurrency and parallelism, and more. It includes debuggers, profilers and rich libraries.

About: Julia is a flexible, dynamic language, appropriate for scientific as well as numerical computing, with performance comparable to traditional statically-typed languages. The developers can use Julia for specialised domains such as machine learning, data science, etc.

About: Objective-C is an object-oriented programming language and is the primary programming language when writing software for OS X and iOS. Objective-C inherits the syntax, primitive types, and flow control statements of C and adds syntax for defining classes and methods. It also adds language-level support for object graph management and object-literals while providing dynamic typing and binding, deferring many responsibilities until runtime.

About: Perl is a highly capable, feature-rich programming language which runs on over 100 platforms from portables to mainframes and is suitable for both rapid prototyping and large scale development projects.

The features of this language are that it is easily extensible, object-oriented, enables Unicode support, etc. The job profiles that require Perl programming include Perl developer, lead Perl developer, among others.

About: Python is an interpreted, object-oriented, high-level programming language with dynamic semantics. It has high-level built-in data structures, combined with dynamic typing and dynamic binding. The simple, easy-to-learn syntax of this language emphasises readability and therefore reduces the cost of program maintenance.

About: Rust is a multi-paradigm programming language that helps in building reliable and efficient software. The features of this language are that they are memory-efficient, have a rich type system, ensure memory-safety and thread-safety, among others.

About: Ruby is a dynamic, open-source programming language with a focus on simplicity and productivity. The features of this language are flexibility, exception handling features, mark-and-sweep garbage collector, OS independent threading, highly portable, etc.

The job profiles that require Ruby programming include Ruby on Rails developer, technical architect, senior backend developer, among others.

About: Scala is a high-level programming language that combines object-oriented and functional programming. The static types of this language help avoid bugs in complex applications, and its JVM and JavaScript runtimes let a developer build high-performance systems with easy access to vast ecosystems of libraries.