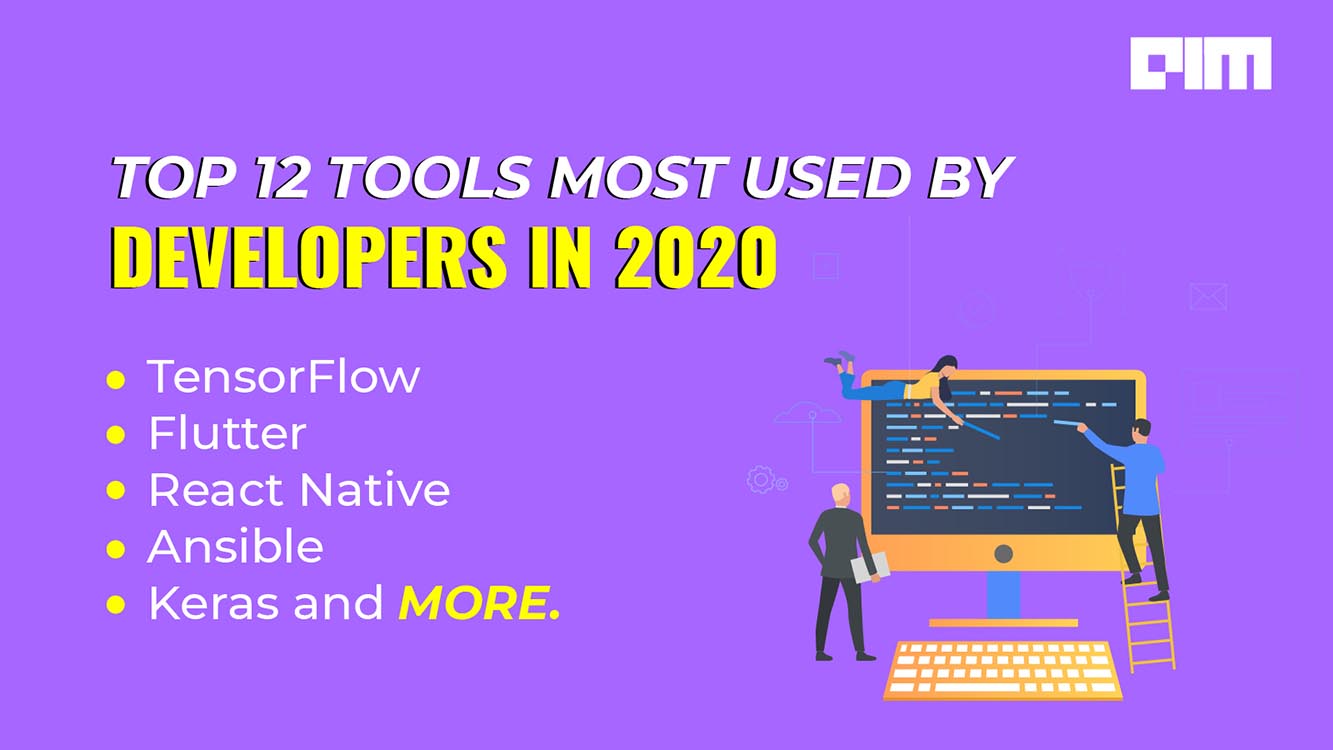 Frameworks and libraries can be said as the fundamental building blocks when developers build software or applications. These tools help in opting out the repetitive tasks as well as reduce the amount of code that the developers need to write for a particular software.

Recently, the Stack Overflow Developer Survey 2020 surveyed nearly 65,000 developers, where they voted their go-to tools and libraries. Here, we list down the top 12 frameworks and libraries from the survey that are most used by developers around the globe in 2020.

About: Originally developed by researchers of Google Brain team, TensorFlow is an end-to-end open-source platform for machine learning. It has a comprehensive, flexible ecosystem of tools, libraries, and community resources that lets researchers push the state-of-the-art research in ML. It allows developers to easily build and deploy ML-powered applications.

About: Created by Google, Flutter is a free and open-source software development kit (SDK) which enables fast user experiences for mobile, web and desktop from a single codebase. The SDK works with existing code and is used by developers and organisations around the world.

About: Built by Facebook, React Native is an open-source mobile application framework that is used to develop applications for Android, iOS, Web, etc. With React Native, you can use native UI controls and have full access to the native platform. Some of its features include creating interactive UIs, building encapsulated components that manage their state, enable local changes in seconds and more.

About: Node.js is an open-source, cross-platform, JavaScript runtime environment, which is designed to build scalable network applications. It is a popular environment that allows developers to write command-line tools and server-side scripts outside of a browser. The environment has an advantage that millions of frontend developers that write JavaScript for the browser can write the server-side code as well as the client-side code without the need to learn a completely different programming language.

About: Keras is a popular and open-source deep learning API written in Python language. The API includes a number of features, such as offering consistent & simple APIs, minimises the number of user actions required for common use cases, has extensive documentation and developer guides as well as provides clear & actionable error messages.

About: Ansible is a simple IT automation system that handles configuration management, application deployment, cloud provisioning, ad-hoc task execution, network automation, and multi-node orchestration. Ansible works by connecting to nodes and pushing out small programs, called “Ansible Modules” to them. Some of the features include managing machines quickly and in parallel, avoid custom-agents and additional open ports, be agentless by leveraging the existing SSH daemon, focus on security and easy auditability.

About: Pandas is a Python package that provides fast, flexible, and expressive data structures designed to make working with “relational” or “labelled” data both easy and intuitive. The library aims to be the fundamental high-level building block for performing practical as well as real-world data analysis in Python. The features of Pandas include easy handling of missing data in floating point as well as non-floating point data, flexible reshaping and pivoting of data sets, time series-specific functionality such as date range generation, frequency conversion, date shifting and lagging, and much more.

About: Created by HashiCorp, Terraform is an open-source infrastructure as code framework, which is used to build, change and versioning infrastructure efficiently. This declarative coding tool helps developers to utilise HashiCorp Configuration Language (HCL), which is a high-level configuration language to describe the on-premise infrastructure for running applications. Terraform can manage existing and popular service providers as well as custom in-house solutions.

About: Created by the tech giant Microsoft, .NET Framework is a software development framework for building and running applications on Windows. It is a developer platform that is made up of tools, programming languages, and libraries for building many different types of applications. It is a cross-platform runtime for cloud, mobile, desktop, and IoT apps.

About: Unity is a game development platform used to build high-quality 3D/2D games that can be deployed across mobile, desktop, VR/AR, consoles, or web. Unity3D is a powerful cross-platform 3D engine and a development engine. Know more here.