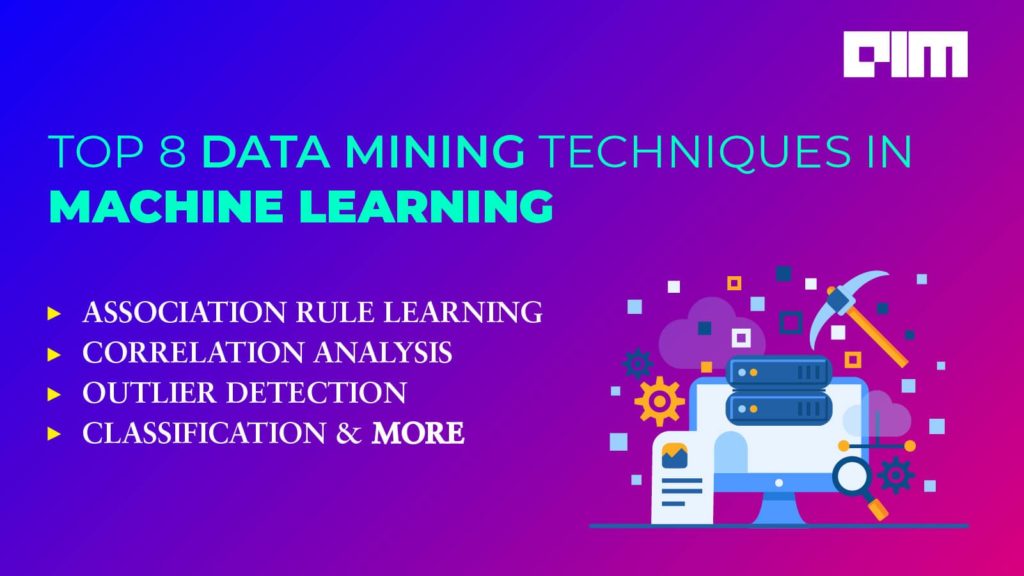 Data mining is considered to be one of the popular terms of machine learning as it extracts meaningful information from the large pile of datasets and is used for decision-making tasks.

It is a technique to identify patterns in a pre-built database and is used quite extensively by organisations as well as academia. The various aspects of data mining include data cleaning, data integration, data transformation, data discretisation, pattern evaluation and more.

Below, we have listed the top eight data mining techniques in machine learning that is most used by data scientists.

Association Rule Learning is one of the unsupervised data mining techniques in which an item set is defined as a collection of one or more items. It is basically a standard rule-based machine learning technique that is used to discover relationships between variables in datasets. It follows the If/Then statements and includes two main parts, which are an antecedent and a consequent.

One of its advantages is that this technique passes a low number of the database while searching the hypothesis space. This technique is useful for solving problems like analysing the behaviour of the customers. Some of the best-known association rule learning algorithms are the APRIORI algorithm, SETM, Eclat, among others.

Also, the learning of these categories is typically achieved with a model, which is used to estimate the group identifiers, also known as class labels of one or more previously unseen data examples with unknown labels. Some of its applications include customer target marketing, document categorisation, medical disease management, multimedia data analysis, among others. Know more here.

Clustering analysis is the technique of grouping data into subsets that have application in the context of a selective problem. In data mining, clustering analysis helps in several ways, including grouping of similar data which helps in understanding the internal structure of the data, knowledge discovery of data, among others.

This technique is useful for exploring data as well as anomaly detection. Some of the popular clustering algorithms are k-means clustering, fuzzy C-means, Expectation-Maximisation (EM) and more.

Correlation analysis is an extensively used technique in data mining that identifies relationships in data which assists in understanding the relevance of attributes with respect to the target class to be predicted. It is a widely used statistical measure through which researchers efficiently identify the collinear relations among different attributes of datasets.

Decision tree induction is a supervised learning algorithm that focuses on the modelling of input as well as output relationships in the form of If/Then rules. Some of its intuitive features include flexibility, efficiency, immunity to outliers, easily extendable, resistant to irrelevant variables, and more. Some of its real-life applications are fraudulent statement detection, business management, customer relationship management, fault diagnosis, among others.

Long-term memory processing is designed to scale data in the memory and gives a higher weight to the input in the sequence. The technique avoids overfitting by scaling the cell state after achieving the optimal results.

Long-term memory network (LTM) is mainly used to remember the long sequences as well as to prevent the learning model from suffering from the vanishing gradient problem. Some of its features are that LTM does not forget the past sequence, it incorporates the past outputs and current inputs, generalises the past sequences and gives higher emphasis on the new inputs.

Outlier detection can be considered as a primary step in several data-mining applications. An outlier is defined as a data point that contains useful information on the abnormal behaviour of the system described by the data. The outlier detection methods can be divided between the univariate method and the multivariate methods.

Regression models are tested by computing various statistics that measure the difference between the predicted values and the expected values. The technique has various applications in trend analysis, business planning, marketing, financial forecasting, time series prediction, and more.