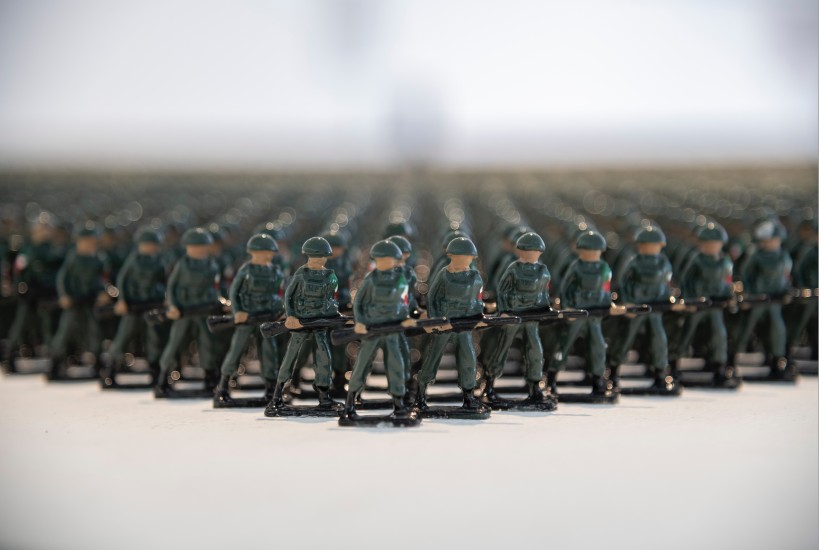 Artificial intelligence has penetrated almost all civilian industries that one can think of. It has transformed the way individuals and businesses work, and now it is quickly making its way in becoming a critical part of modern warfare.

The strength of its army is one of the factors indicating how powerful the country is. In some of the most developed nations, investment in this sector is the highest as compared to other sectors. A major part of this investment goes towards rigorous research and development in modern technology such as AI in military applications. AI-equipped military systems are capable of handling volumes of data efficiently. In addition to that, such systems have improved self-control, self-regulation, and self-actuation due to its superior computing and decision-making capabilities.

Use Cases of AI in Defence

Training: Training and simulation are multidisciplinary fields which utilise system and software engineering principles to construct models that can help soldiers train on various combat systems deployed during the actual military operations. The US Navy and Army have already initiated several sensor simulation programs.

Further, augmented and virtual reality techniques can be used to create effective, realistic, and dynamic simulations for training purposes. The reinforcement techniques enhance combat training for both virtual agents and human soldiers.

Surveillance: AI with geospatial analysis can help in the extraction of valuable intelligence from connected pieces of equipment such as radars and automatic identification systems. This information can help in detection of any illegal or suspicious activities and alert the concerned authority. Robots with AI and computer vision with IoT can also help in target identification and classification.

Arms and Ammunition: New-age weaponry now comes with AI-embedded technology. For example, sophisticated missiles have the capability to determine and analyse the target range for kill zones without any human intervention.

Cybersecurity: In defence circles, cyberspace is now being considered as the third war-front after land, sea, and air. A compromised and malicious network can severely compromise the security of the whole region. Defence establishments are using machine learning to predict and protect from unauthorised intrusions. This intrusion detection is usually done by classifying the network as normal or intrusive. AI-based techniques help in increasing the accuracy of such classification.

Logistics: One of the most important factors that play a role in determining the success of a military operation is logistics. Integration of machine learning and geospatial analysis with the military’s logistical systems reduce the amount of effort, time, and error.

Use of AI in Militaries Around World

Some of the frontrunners in deploying new-age technology to further strengthen their forces are — the USA, China, and Russia.

The Defence Department of the USA released its first AI strategy in 2019 which called for increasing use of AI systems throughout the military, right from decision-making to problem prediction through investment and partnership with private establishments in AI research. Some of the more popular AI-based projects that are already deployed in the US military are –Project Maven, Defense Advanced Research Projects Agency’s (DARPA) Squad X Experimentation Program, and the OFFSET program.

China’s leadership has also been pushing for more AI and machine learning-based innovation in military technology. President XI Jinping has called for treading the path of ‘military-civil fusion-style innovation’; this has also found its place in the national strategy of China. Some of the projects in direction are — ‘Military-Civil Fusion National Defense Peak Technologies Laboratory’ launched by Tsinghua University and the development of the Blowfish A2 model in collaboration with a company named Ziyan UAV.

According to the company, this Blowfish A2 model can autonomously perform complex combat missions such as fixed-point timing detection and target precision strikes. Notably, in 2017, China released its State Council AI Plan, which outlines the country’s ambitious project which aims to create an AI-industry worth 150 billion RMB.

Russia’s military prowess is famed across the globe. The country operates its own equivalent of the US’ DARPA called Foundations for Advanced Research Projects. On the AI for the military front, top officials have been seen endorsing developing AI-based technology. Reportedly, the Russian defence forces are looking at capitalising on AI, big data, and machine learning to conduct more impactful information operations. Currently, Russia invests heavily in AI for detection, analysis, and debunking misinformation, both in the commercial sector and defence.

India, which has one of the largest armies in the world, is also taking tiny steps deploying AI-based innovation in its combat and surveillance projects. In fact, in 2019, the Ministry of Defence established a high-level Defence AI Council (DAIC), which is assigned with the task of providing strategic direction to adopt AI in defence. DAIC’s primary function includes guiding partnership between government and the industry for deployment of such innovations.

One of the major concerns with using AI-based technology is an investment in terms of both money and skills. Especially for middle-income countries like India, where a lot of the population is still living under the poverty line, how much can we afford to provide infrastructure capabilities for building such technology is a big question. The possible solution is that policymakers must decide on what AI programme is necessary for the security of the nation and work towards them.

The use of AI in defence also presents an ethical dilemma. Experts and organisations around the world have raised such technology unintentionally escalating the tensions between countries. One of the arguments is that if an AI system fails to perform as intended may result in catastrophic implications. In fact, several human and civil rights groups call for an absolute ban on autonomous devices in defence, especially weaponry.

Reviewing 2020 Tech Landscape: How AI Fared For Businesses While Navigating The Pandemic