Do Not Evaluate Data Science Jobs Based On Paychecks, Says This Chief Data Scientist 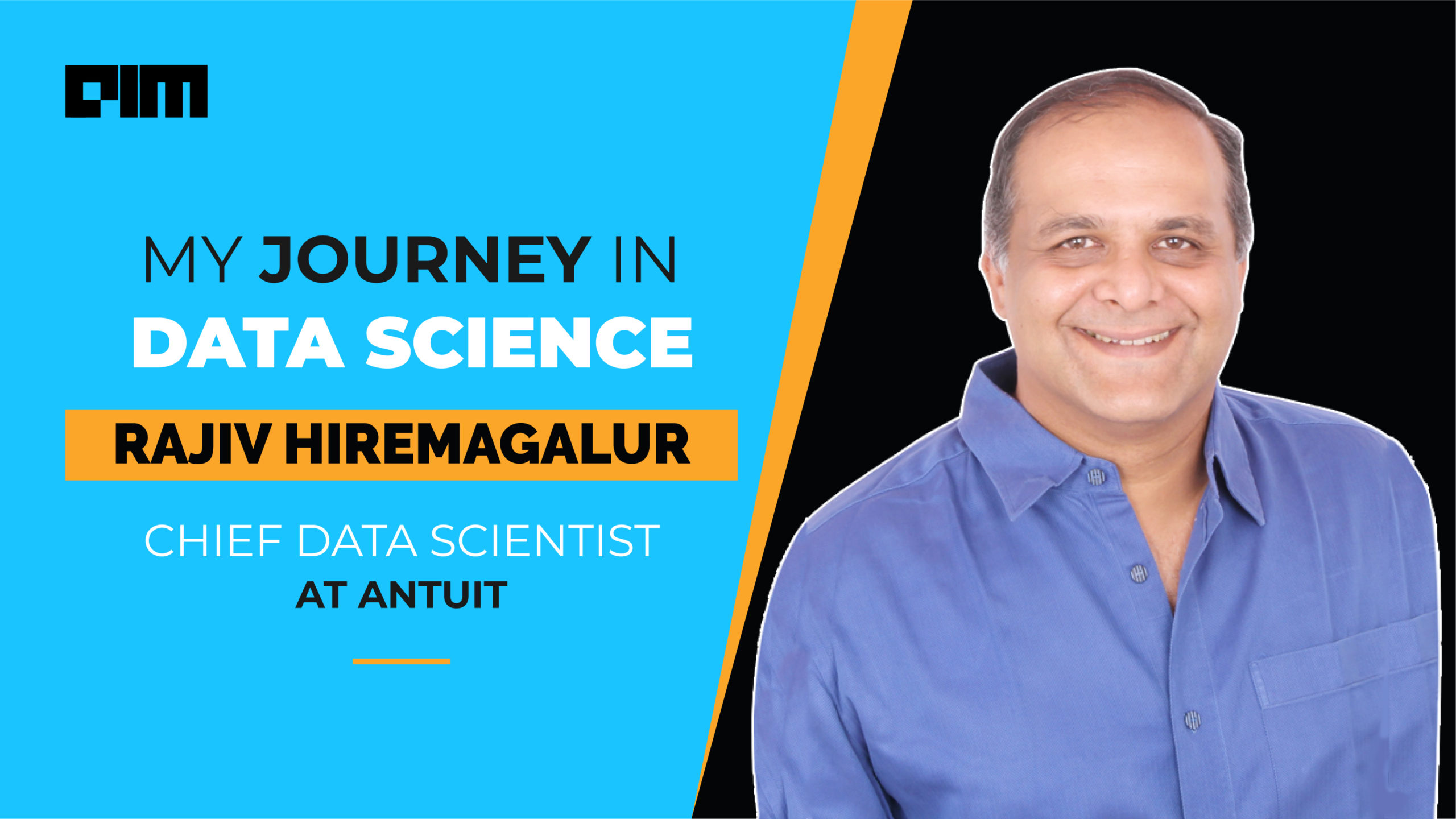 Every week, Analytics India Magazine interviews prominent scientists to spread their success stories with the community. In this edition of our weekly column My Journey In Data Science, we got in touch with Rajiv Hiremagalur, Chief Data Scientist at Antuit.

Hiremagalur, after pursuing his graduation in computer science from Bangalore University completed a degree on Master of Science from Illinois State University in 2001. For the next few years, he worked as a java programmer, application developer, database architect, enterprise architect, among others. However, he only understood the potential of data when he started working for Royal Caribbean International in late 2003. Hiremagalur joined the company as a marketing analyst, where he was doing reporting automation. “This is where my journey in data science/modelling/analytics began,” adds Hiremagalur.

Hiremagalur learned regression and decision trees, which he found interesting to apply on various business challenges. However, what Hiremagalur was fascinated by was that data science was not like any other IT role where one writes some module and doesn’t know how it fits into the overall picture of the business. He believes that data science is the art of assimilating the business processes for which full circle visibility is essential to deliver superior results.

As the data science landscape evolved, Hiremagalur started learning from the courses provided by MOOCs. He first learnt R programming in 2014 and then moved on to Python later on. As per Hiremagalur, 2014 was when everyone witnessed numerous developments in the data science market. Therefore, to stay abreast of the new advancements, he used to create a list of techniques to master. This helped him in doing one thing at a time and avoiding burnouts by learning too many things at once, which many aspirants prefer today.

Continuing on the preparation strategy, Hiremagalur said that everyone learns differently. Consequently, one should figure out the best plan that works for them. However, Hiremagalur modus operandi was to first watch Youtube tutorials for obtaining a higher level of conceptual understanding. Then, he browsed through the world wide web to find blogs and dug deep into the mathematical techniques. Eventually, he cloned codes from GitHub and tried to implement it with the data he had. This helped him figure out the things he needed to change for it to work, thereby learning about the nitty-gritty of various techniques.

“In this ever-changing world data science landscape, people fail to devise a perfect plan. Many people do not understand what the job of a data scientist is; they get into thinking it’s Python programming. Today, it might be, but tomorrow it can be Scala or Go or Rust. The domain is about understanding data and business first, and then talking to data to find opportunities,” says Hiremagalur.

Talking about his worst experience, Hiremagalur explained how he joined a company as vice president to assist them in building data science products as they offered him more money. The firm already had some solutions for their clients but wanted to pivot it into products. However, when he joined the organisation, Hiremagalur realised that they were not into hardcore data science. They relied on visualisations, descriptive analytics, and others.

Besides, he also realised that the firm was not committed to the domain, and took any upcoming projects since they were motivated by money. “Consequently, I quit the job,” says Hiremagalur. “What I learnt from that was not to evaluate a job opportunity based on money. Money is important, but aspirants should also look for what they can learn and how it will help in the long run.”

Hiremagalur’s 15 years of journey in data science hasn’t been straightforward as he had a few failures along the way. He described how he failed in one of the interviews that taught him a lot and was a reality check on his abilities. The company was into performing extensive deep learning, which Hiremagalur was not aware of.

“Failure in the interview opened up my eyes in terms of what I am capable of and what I need to learn. Although I didn’t get the job, it showed me the direction I needed to move towards,” explained Hiremagalur.

However, today, Hiremagalur is a prominent data science practitioner and actively working to build an exceptional data science team for achieving business objectives. As a part of his job, he also hires data scientists who are curious, motivated and have humility. Besides, he does not focus on certifications and mostly relies on evaluating through his assessment tests. “Doing a course is not tough, the harder part is what you learn and will you be able to apply it,” believes Hiremagalur.

Hiremagalur suggests that aspirants should not deviate in the ever-changing data science landscape and strengthen their fundamentals. However, he also believes that learning new things is equally important. Besides, along with languages and algorithms, aspirants should also develop analytical thinking ability. He also said that being humble and learning to work with people irrespective of their experience, knowledge and intelligence is essential for anyone to succeed. Eventually, he concluded by saying that one should go deep into problems before moving on to newer ones as there is no point being a mile wide and an inch deep.