Honouring Robert Langlands, A Mathematics Visionary For Whom Abel Prize Came A Tad Too Late 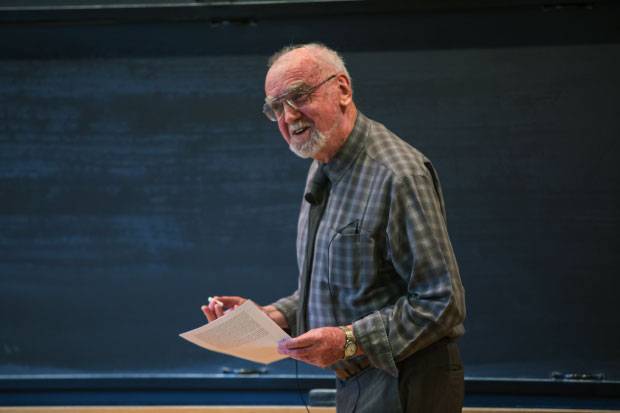 Abel Prize, which is considered the Nobel Prize of Mathematics, has been awarded to Robert Langlands for the year 2018, for his work dating back to January 1967. With an interesting tale of a revolutionary theory that could have almost landed in a trash, he developed one of the most original insights of the 20th century mathematics.

This 81-year-old math genius, who is an emeritus professor at the Institute of Advanced Study in Princeton, is the progenitor of the ‘Langlands program’ or more popularly known as the creator of ‘Grand Unified Theory of Mathematics’. Since then, generation of mathematicians have taken up and expanded upon his vision. To get a quick insider, he was created a completely new way of thinking about mathematics—suggesting deep links between two areas, number theory and harmonic analysis, which were previously thought to be unrelated. This finding has been a crucial factor in answering centuries old questions about the properties of prime numbers.

A decision which came after judging 100 other potential recipients and judged by a five-member panel, will recognize his work at an award ceremony in Oslo on 22 May, where the award will be by His Majesty King Harald V. He will be pick up a prize money of approximately US$775,000, which is named after Niels Hendrik Abel, a Norwegian mathematician. First awarded in 2003, it has been since awarded to Andrew J. Wiles, Peter D. Lax, and John F. Nash Jr., whose life was portrayed in the movie “A Beautiful Mind.”

While he was working during a Christmas break, he wrote a 17-page letter to the great French mathematician Andre Weil, outlining some of his new mathematical insights. The 30-year-old Langlands was unsure of the finding he had made, and wrote “If you are willing to read it as pure speculation I would appreciate that, if not – I am sure you have a waste basket handy.” This very finding now forms a basis of links between number theory and harmonic analysis.

Weil was receptive to the brilliant ideas Langlands proposed, and hence came the theory to life. He had the letter typed up and circulated among other mathematicians, which came to be known as the ‘Langlands program’. While Dr. Langland proved a few pieces of it, others have solved additional special cases.

Mathematicians have always been interested in finding patterns in prime numbers, which are the fundamental pieces from which the study of arithmetic is built. Citing suggests that the letter described a way to extend some of Carl Friedrich Gauss’ pioneering work on prime numbers, where theorists before Gauss had noticed that all that prime numbers can be formulated as the sum of two squares and have a remainder of 1 when divided by 4. But they didn’t know if this was true in all cases.

Langlands took Gauss’ work and showed that the prime numbers that can be expressed as the sum of numbers raised to the third or fourth power (such as 1^3+2^3+4^3=73) and be tied to the distant mathematical realm of harmonic analysis. He did so by using Fourier analysis to address fundamental problems in the theory of numbers.

Langlands’ work became so critical to math that his findings lured hundreds of other mathematicians, eventually known as the Langlands program. His work serves as the starting point of many researchers such as the proof of Fermat’s Last Theorem by Dr. Wiles of Oxford, which is dependent in part on exactly the type of relationship between between number theory and analysis that Langlands had predicted decades earlier.

“He never got a Fields medal,” said Peter C. Sarnak. “But many people have got Fields Medals for settling special cases of his conjectures, relying on his tools to start off.”