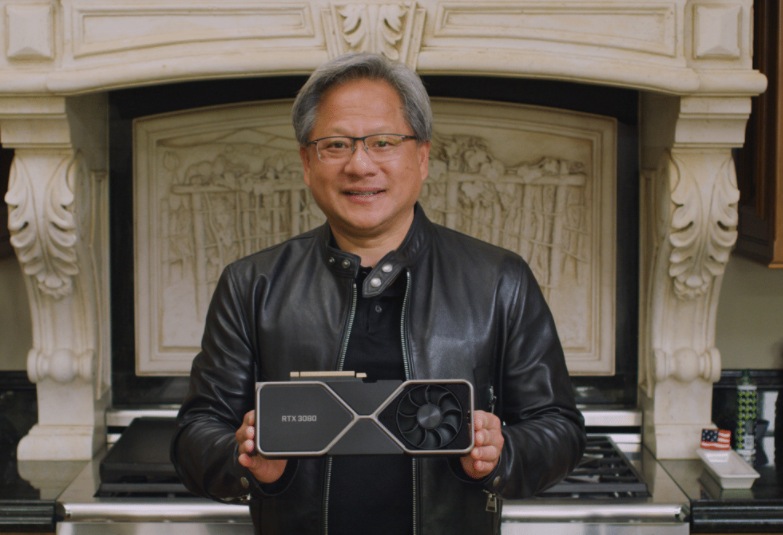 “If the last 20 years was amazing, the next 20 will seem like nothing short of Science Fiction.”- Jensen Huang, CEO of Nvidia

Jensen Huang, CEO and founder of Nvidia, has unveiled its all-new GeForce RTX 30 Series GPUs. Huang made the announcement from the kitchen of his Silicon-valley home as he also spoke about some of the new tools for GeForce gamers.

The GeForce RTX 30 Series GPUs is the second-generation RTX GPUs that includes the trio of new RTX GPUs — the flagship GeForce RTX 3080, the GeForce RTX 3070 and the “ferocious” GeForce RTX 3090. During the virtual launch event, he claimed that this series is delivering the “greatest generational leap” in the company’s history.

The series is powered by the NVIDIA Ampere architecture, also known as the largest 7-nanometer processor in the world. According to this blog post, the GeForce RTX 3090, 3080 and 3070 GPUs are said to have smashing performance records and have the capability to deliver up to 2x the performance. It is also said to provide 1.9x power efficiency over previous-generation GPUs.

Also, the GPUs take advantage of the second generation of NVIDIA RTX, which is the world’s most powerful PC gaming platform in order to provide unprecedented levels of real-time ray tracing and AI gaming.

Huang stated, “If the last 20 years were amazing, the next 20 would seem like nothing short of science fiction,” He added, “today’s NVIDIA Ampere launch is a giant step into the future.”

Behind The RTX 30 Series

Talking about the RTX 30 Series, Huang stated, “the days of just relying on transistor performance scaling is over.”

Priced at $1,499, the GeForce RTX 3090 or the Big Ferocious GPU (BFGPU) is said to be the world’s first GPU capable of playing blockbuster games at 60 fps in 8K resolution.

The RTX 3090 is up to 50 per cent faster than the current ultimate PC graphics card and comes with a silencer, i.e. a three-slot, dual-axial, flow-through design that is up to 10x quieter than the TITAN RTX.

Built on a custom 8N manufacturing process, the flagship GeForce RTX 3080 has 28 billion transistors. It connects to Micron’s new GDDR6X memory, which is known to be the fastest graphics memory ever made. The starting price of RTX 3080 is $699 and is said to be the ultimate gaming GPU, i.e. up to 2x faster than the RTX 2080.

The new RTX 30 Series GPUs along with the NVIDIA Ampere architecture includes a number of intuitive features. They are-

Besides the trio of the new GPUs, Huang also introduced a slate of new tools for the GeForce gamers. They include-

Nvidia Reflex is a suite of GPU, G-SYNC display, and software technologies that measure and reduce system latency in competitive games. NVIDIA Reflex features two major new technologies – NVIDIA Reflex SDK and NVIDIA Reflex Latency Analyser. It reduces and measures rendering latency, detects the clicks coming from the user’s mouse and then measures the time it takes for the resulting pixels to change on the screen.

NVIDIA Broadcast is a universal plugin that works with most popular live streaming, voice chat and video conferencing apps. It mainly harnesses AI to build virtual broadcast studios for streamers.