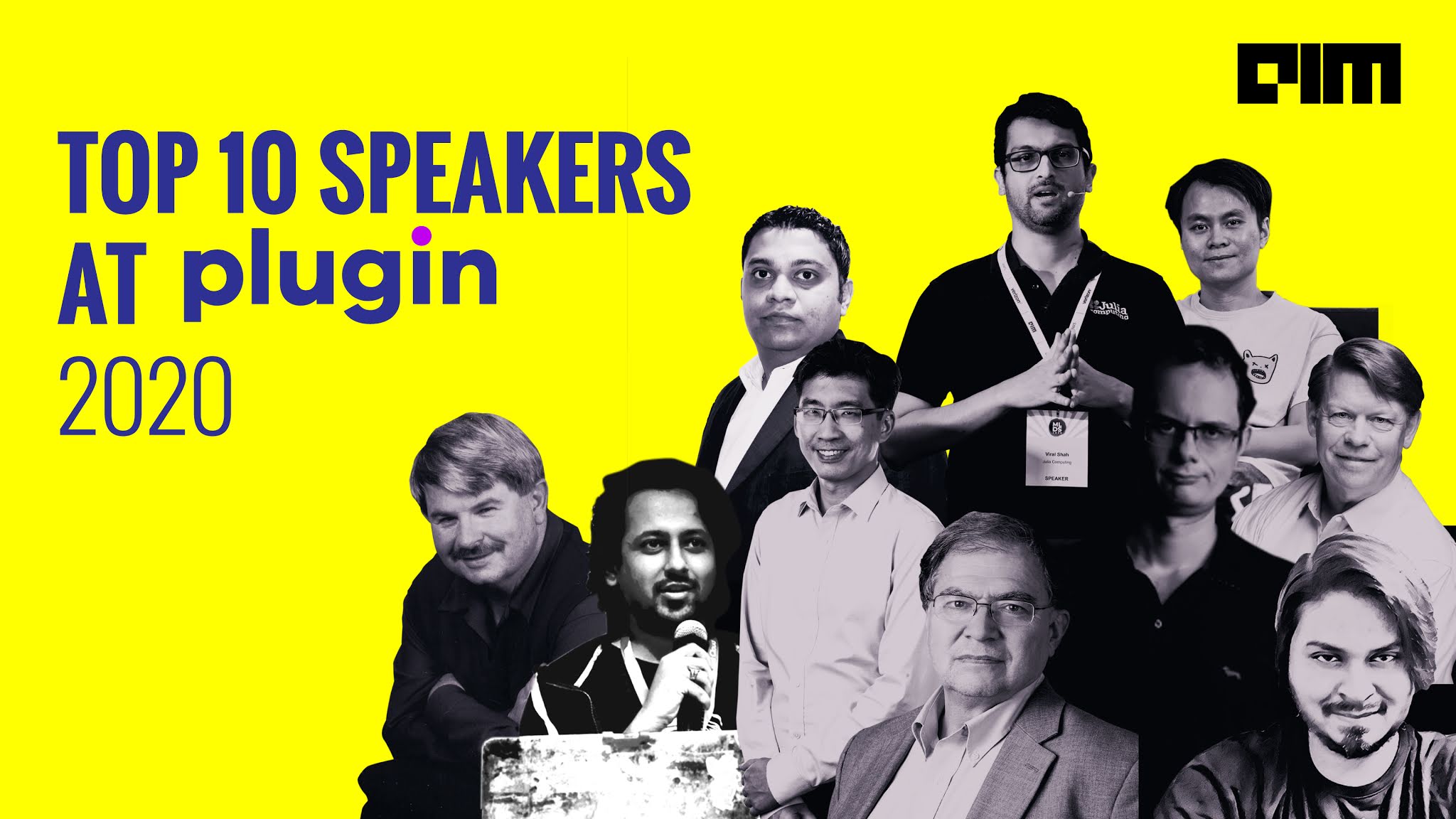 plugin is an innovative next-gen online conference on artificial intelligence and data science, which has been initiated to bring in the experts of the industry to talk about cutting-edge innovations in a distinctive virtual setting. Hosted by Analytics India Magazine, plugin is a two-day event providing an opportunity for attendees to network with their peers, meet leaders visually, and learn from subject matter experts of the industry.

plugin will include three tracks across two days and will have 50 plus speakers who will help attendees to explore key concepts, understand use cases, and learn best practices in data science. Along with that, the event will host a wide range of tech talks, workshops and sessions conducted by some of the best minds in the industry.

In this article we will share the top ten speakers that you must attend to at plugin 2020:

William H. (Bill) Inmon, is an American computer scientist, recognised by many as the father of the data warehouse. He wrote the first book, held the first conference with Arnie Barnett, and was a pioneer to offer classes in data warehousing. Inmon also created the accepted definition of what a data warehouse is — a subject-oriented, non-volatile, integrated, time-variant collection of data in support of management’s decisions. At plugin, his talk is scheduled for 28th May, where he will speak about data architectures, the broad spectrum of all of the data in the corporation and its business value.

Viral B Shah is an Indian computer scientist, best known as a co-creator of the Julia programming language. Besides, he is the CEO of Julia Computing, which he co-founded with Alan Edelman, Jeff Bezanson, Stefan Karpinski, Keno Fischer and Deepak Vinchhi. With a background in bachelors in computer engineering from the Padmabhushan Vasantdada Patil Pratishthan’s College of Engineering, Shah pursued Computer Science from the University of California, Santa Barbara, where he received his PhD in the field of Combinatorial Scientific Computing.

Dr Kirk Borne is an astrophysicist, data scientist, and is also the principal data scientist of the Strategic Innovation Group at Booz-Allen Hamilton, and was a professor of astrophysics and computational science in the George Mason University School of Physics, Astronomy, and Computational Sciences during 2003-2015.

Borne has experience in huge scientific databases and information systems, including proficiency in scientific data mining. He was also a contributor to the design and development of the new Large Synoptic Survey Telescope, for which he contributed to the study of science data management, informatics and statistical science research, and public outreach. At plugin, Borne’s talk is scheduled for 29th May, where he will speak about the importance of data literacy for the future of work.

Abhishek Thakur is the world’s first 4x Kaggle Grandmaster and currently works as a chief data scientist for boost.ai. He holds a master’s degree in computer science from the University of Bonn. In his free time, he likes to create YouTube videos related to applied machine learning, take part in machine learning competitions, and is about to launch a book titled: Approaching (Almost) Any Machine Learning Problem.

Poh completed his bachelor’s degrees in pure mathematics, statistics and economics from the University of California, Berkeley, and has received his postgraduate degree in statistics from Yale University.

Gianluca is the head of data science at Kuoni, a global travel brand, and also works as a freelance instructor of ‘data science of business’ courses. Previously he had set-up the data operations at Groupon, where he was heading the analytics for six years. At plugin, his talk is scheduled on 29th May 2020, where he will speak about the black-box approach to data science and what it actually means for businesses.

Dipanjan Sarkar is a data science lead at Applied Materials, where he manages advanced analytics efforts around natural language processing, computer vision, and deep learning. Sarkar is also a Google Developer Expert in Machine Learning. He holds a master of technology degree with specialisations in data science and software engineering. Sarkar has been an analytics practitioner for several years now, specialising in machine learning, natural language processing, computer vision and deep learning. He also acts as a mentor and an AI consultant at various organisations like Springboard. He has published several books on Python, R, machine learning, natural language processing, social media analytics, and deep learning. In his spare time, he loves reading and watching football and popular sitcoms. At plugin, his talk is scheduled for 28th May 2020, where he will speak about how NLP can be used to solve real-world problems.

With close to 13 years of professional experience, Anirban Nandi specialises in data sciences, business analytics and data engineering spanning across various verticals of online and offline retail, and building analytics teams from the ground up. Following his masters from JNU in economics, Nandi started his career in the analytics team at Target and spent more than eight years working on developing in-house analytics products like customer personalisation, recommendation system, and search engine classifiers. Post Target, Nandi became one of the founding members at Data Labs and spent close to five years, building and growing the onshore and offshore team of approximately 100 members working across industries. Currently, Anirban is associated with Rakuten as the head of analytics. He is developing analytics solutions for the Rakuten global ecosystem, and building a high-performing team in the Bangalore office.

Dat Tran is the head of AI at Axel Springer Ideas Engineering, the innovation unit of Axel Springer SE, which is the largest digital publishing house in Europe. He leads Axel Springer AI, where his mission is to democratise AI within Axel Springer, and hence, he drives innovations within the group. Tran is continuously striving to turn Axel Springer into an AI-first firm.

Previously, Tran co-headed the data team at idealo.de, where he built up the machine learning team from scratch. Besides, he is a regular speaker and has presented at several renowned AI conferences.

Tran’s background is in operations research and econometrics. He has received his MSc in Economics from the Humboldt University of Berlin. Tran’s interests are diverse from traditional machine learning, deep learning, AI in general to computer vision. At plugin, his talk is scheduled for 28th May 2020, where he would speak about how to implement a production-ready deep learning model in twelve weeks.

Prior to CSL, Thompson was an executive partner at Gartner, where he was a management consultant to market-leading companies in the areas of advanced analytics, digital transformation, and data monetisation. Before Gartner, Thompson was a leader for the advanced analytics business unit of the Dell Software Group. Thompson is also a co-author of the bestselling book – Analytics: How to win with intelligence. The book debuted on Amazon as the #1 new book in Analytics in 2017.

Thompson is a technology leader with experience spanning across numerous operational areas with a focus on product innovation, strategy, growth and efficient execution. At plugin, his talk is scheduled on 28th May, where he will speak about how to build your analytics team.