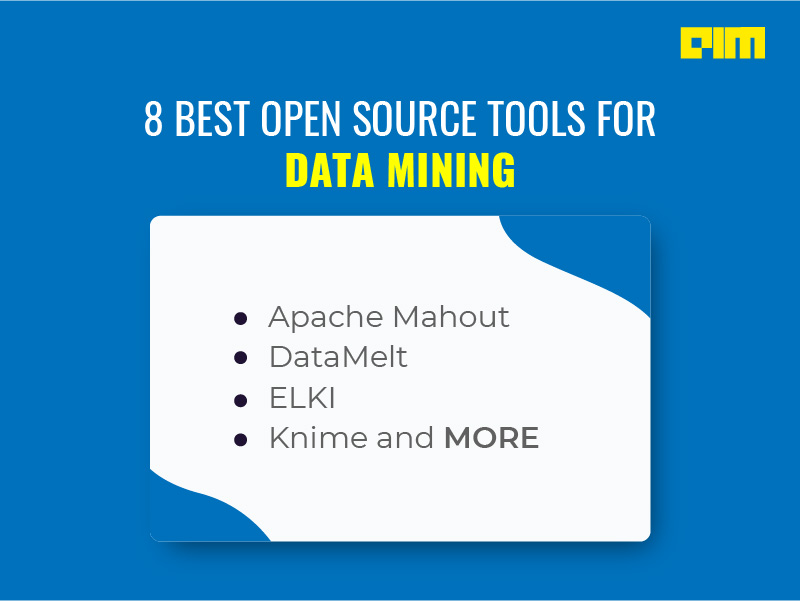 One of the popular terms in machine learning techniques is data mining. It is the process of extracting hidden or previously unknown and potentially useful information from the large sets of data. The outcome can be for analysing and achieving meaningful insights for the development of an organisation.

In this article, we list down the eight best open-source data mining tools one must know.

Apache Mahout is a popular distributed linear algebra framework. The framework is a mathematically expressive Scala DSL which is designed to let statisticians and data scientists implement their algorithms in a faster manner. It builds an environment for quickly creating scalable and performance-driven machine learning applications.

DataMelt or DMelt is open-source software for numeric computation, mathematics, statistics, symbolic calculations, data analysis and data visualisation. The platform is a combination of various scripting languages such as Python, Ruby, Groovy, among others with several Java packages.

Environment for Developing KDD-Applications Supported by Index-Structures or ELKI is an open-source data mining software written in Java language. This platform aims to research in algorithms, with an emphasis on unsupervised methods in cluster analysis and outlier detection.

Orange is an open-source, component-based data mining software for machine learning and data visualisation. It includes a range of data visualisation, exploration, preprocessing and modelling techniques and can be used as a module for the Python programming language.

Why Data Is Critical In The Fight Against Coronavirus

Written in R language, Rattle is a popular open-source GUI for data mining that presents statistical and visual summaries of data. It transforms data so that it can be readily modelled. It builds both unsupervised and supervised machine learning models from the data, presents the performance of models graphically, and scores new datasets for deployment into production.

scikit-learn is a popular Python library for data analysis and data mining that is built on top of SciPy, Numpy and Matplotlib. The primary functions of scikit-learn are divided into classification, regression, clustering, dimensionality reduction, model selection, as well as data preprocessing.

WEKA or Waikato Environment for Knowledge Analysis is a popular open-source machine learning software that can be accessed through a graphical user interface, standard terminal applications, or a Java API. It is a collection of machine learning algorithms for solving real-world data mining problems. It is written in Java and runs on almost any platform.