For small sellers to maintain entirely separate infrastructures and processes for online and offline sales is difficult and eats into their costs, which might not be affordable for many. 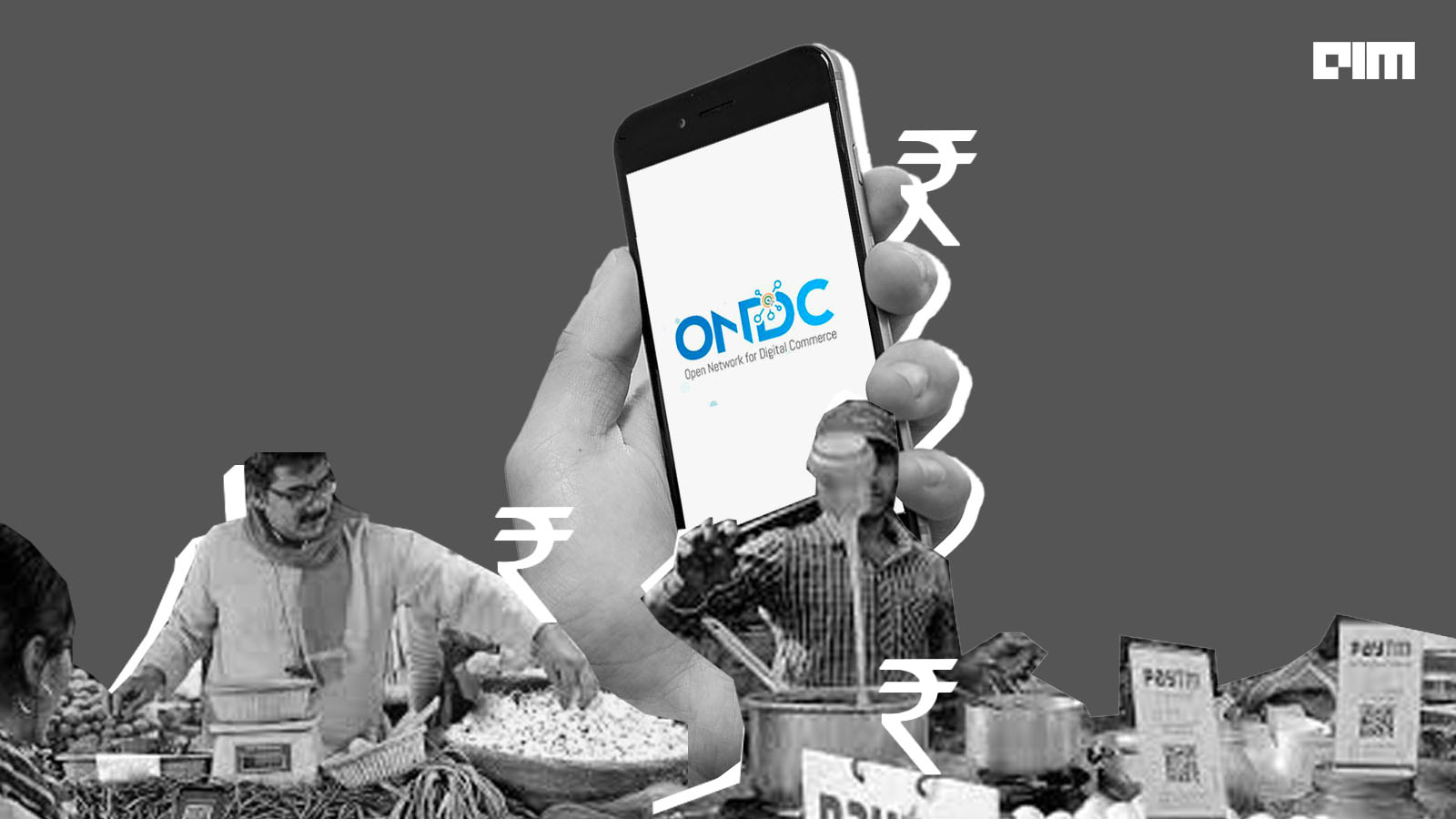 Last year in July, a nine-member committee was formed by the Centre to promote open networks, help create digital value chains for Indian businesses and essentially restrict the current digital monopolies by Amazon and Flipkart. Titled the Open Network for Digital Commerce or ONDC, the non-profit project was initiated by the Department of Promotion of Industry under the Department of Commerce and Industry.

Nandan Nilekani, the non-executive chairman of IT giant Infosys and AADHAR architect, was named to the advisory council for recommending steps that would speed up the setting up of ONDC. A government-signed order during the launch stated that ONDC intended to design an open-source network independent of any particular platform. It explained, “ONDC is expected to digitise the entire value chain, standardise operations, promote inclusion of suppliers, derive efficiencies in logistics, and enhance value for consumers.” The platform will consist of both products and services.

The council also comprised other key members, including Kumar Rajagopalan, CEO of the Retailers Association of India, Arvind Gupta, co-founder of Digital India Foundation, Anjali Bansal, founder of Avaana Capital, Suresh Sethi, CEO of NSDL e-Governance Infrastructure and Chief of the Confederation of All India Traders or CAIT, Praveen Khandelwal, among others. Retired bureaucrat and CEO of National Health Authority, RS Sharma, was also a part of the statutory authority, Unique Identification Authority of India or UIDAI, that led AADHAR.

The bureaucratic wheels turned fast. By September, reportedly, Union Commerce Minister Piyush Goyal had already helmed meetings that had laid the roadmap for ONDC. Goyal has been open about his dislike for Bezos’ e-commerce giant Amazon and Walmart-owned Flipkart, which together hold power over close to 60 per cent of India’s e-commerce market. In February last year, a Reuters investigation found that Amazon India was bypassing FDI regulation while giving undue preference to their own sellers over small merchants on their site. During Bezos’ last visit, Goyal remained unimpressed by his promises of investment and refused to meet the Amazon boss.

A day prior to the launch of ONDC, the Competition Commission of India or CCI raided Amazon and Flipkart over unethical practices that were creating a divide between corporate sellers and small businesses on their platforms. Meanwhile, ONDC’s platform is expected to expand from five cities on the first day to a hundred cities within the next six months. It aims to connect 30 million sellers and 10 million online merchants by August. State-owned banks – State Bank of India picked up a 7.84 per cent stake worth Rs. 10 crores, and Punjab National Bank picked up 9.5 per cent equity worth Rs. 25 crores. This followed Kotak Mahindra Bank, Axis Bank and HDFC Bank, all of whom lined up to buy equity valued at Rs. 10 crores each.

Earlier this week, news broke that Google was in talks to join ONDC. Google was planning to integrate its shopping services, which currently work as an aggregator of online listings. While the partnership hasn’t yet been confirmed, a Google spokesperson said, “We remain committed to focusing on the enablement of small and medium businesses to leverage digital for deeper discovery and payments capabilities with Google Pay.” Other partners of ONDC, including Indian fintech company Paytm, will show listings from each other on their platform in search results.

As funding flows in with ease and the intentions themselves are noble, there are questions being raised about how ONDC will reach its goals. India still doesn’t have uniform regulations around e-commerce customer liability. For Amazon and Flipkart, in case of a customer complaint regarding the delayed delivery of a product or a damaged product, the onus rests on the platform and not the seller. We don’t quite know how ONDC plans to deal with this challenge. Can small Kirana stores on the platform keep up with bigger sellers when it comes to offering discounts?

All of this is to ultimately ask, can ONDC actually level the playing field for small local shops and bigger stores?

Praveen Khandelwal, chief of CAIT and member of the advisory council for ONDC, voiced his concerns, saying while the basic concept of the platform can be appreciated, we are far from reaching clarity around the mechanism. “There are more than eight crore traders in the country. It will not be easy to bring them to the platform and explain the relevance of ONDC to them. There is no credibility of ONDC in the minds of Kirana shop owners and local traders. There is no point for them to move to the platform,” Khandelwal says. This is added to the fact that there is an absence of basic regulations around e-commerce policy; Khandelwal is sceptical about the reasons behind the shift when e-commerce has already depreciated the environment for local businesses in the country.

Websites like Amazon and Flipkart have been able to leverage upon a smooth system that incorporates warehousing facilities, payment gateway, returns and refunds and a backend that helps their sites run without any glitches. Anil Kumar, chief executive officer of Redseer Management Consulting, spoke to Bloomberg, saying, “The government needs to build something comparable or better if it wants to outdo the dominant e-commerce platforms. Everything hinges on the network bringing the widest set of buyers, sellers, payment logistics and warehousing providers, and so on.”

There is a flipside to the present movement towards over-regulation in the country. India’s small businesses form the backbone of the country, accounting for almost one-quarter of the USD 2.9 trillion economy. These MSMEs employ more than 500 million people. The unregulated cash that is generated from these local mom-and-pop stores serves to cushion the impact of macroeconomic financial crises like the 2008 recession. Protected by its informal sector, the Indian economy grew at a 6.7 per cent rate between 2008 and 2009, which was comparatively far better than other countries. Between 2009 and 2010, the economy bounced back quickly to 8.5 per cent.

A strategy paper released by ONDC in January discussed some of the issues that crop up in large e-commerce platforms. Most Kirana stores and MSMEs run their businesses on a foundation of trust with their customers and earn a loyal clientele. This reputability cannot be displayed on an e-commerce platform. For small sellers to maintain entirely separate infrastructures and processes for online and offline sales is difficult and eats into their costs, which might not be affordable for many.

Ironically, Nilekani spoke at the Amazon Smbhav Summit in April last year about the importance of India’s small businesses for the country’s future, saying, “Folks like Amazon are going to give access to markets, both domestically and globally, increasing digitisation of our small businesses.” He continued complimenting Amazon for creating job opportunities for millions of Indians, stating, “I believe all of India’s businesses should aspire to be large, and with partners like Amazon, I am sure they will do it.”

In many ways, the issues dogging ONDC could be the ones that were attached to past projects involving Nilekani. AADHAR has been mired in controversies related to identity and privacy. Despite its ubiquitous nature, the effectiveness of AADHAR is shrouded under a veil. Intentions to speed up the payments of MNREGA wages have reportedly failed largely. A report by LibTech India that analysed more than 18 lakh wage invoices for the first half of 2021-22 showed that 71% of the payments were delayed beyond the time period specified by the Union government. A new study conducted on more than 3,000 MNREGA workers showed that 57% of work IDs of genuine workers had been removed to demonstrate 100% linking of AADHAR. While AADHAR took six years to be implemented, ONDC might unfold much faster considering the pace it is unfolding at. The only question that remains is to what end?