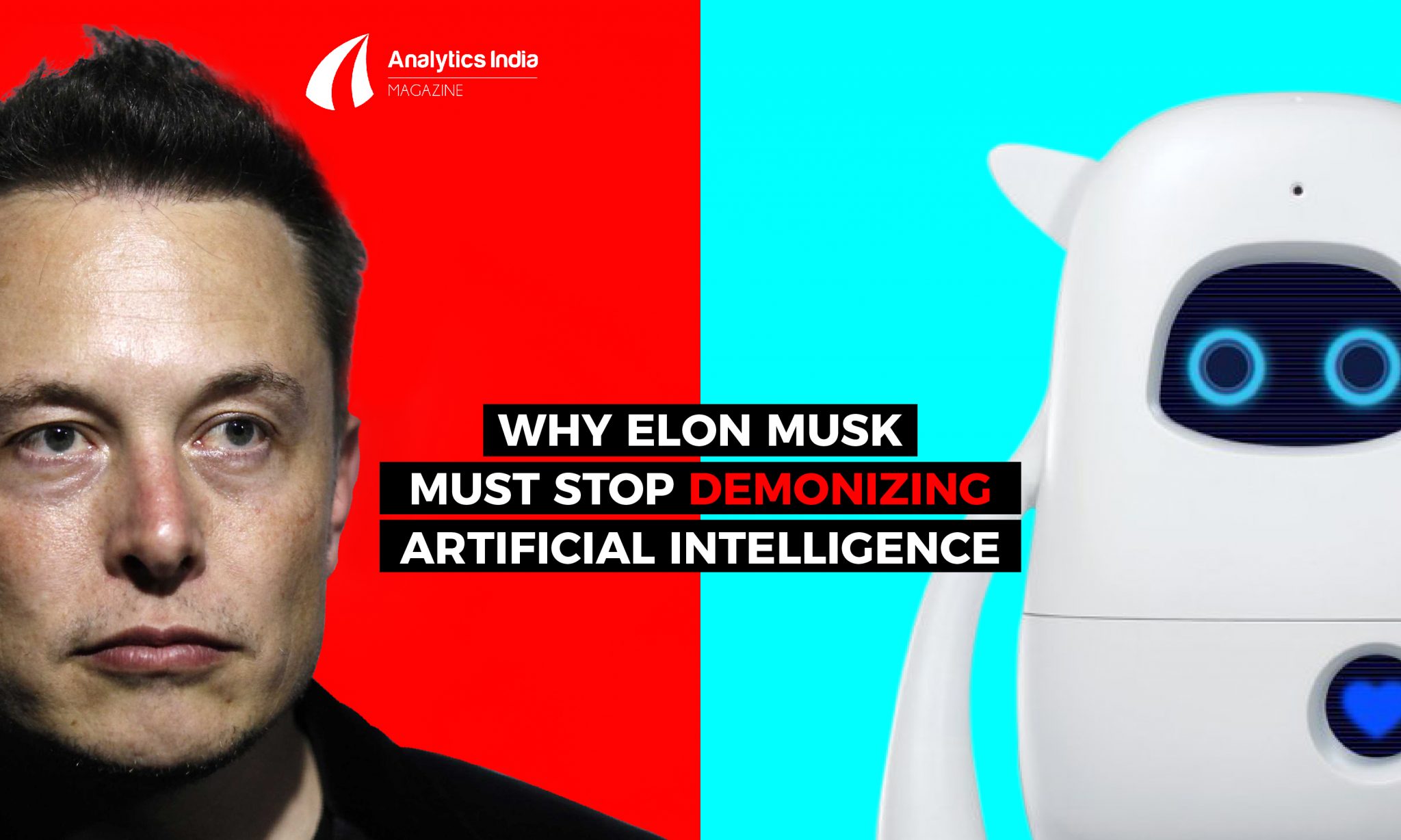 Elon Musk’s name is almost synonymous with technology itself today. Undoubtedly, he has generously contributed towards disruptive technologies such as AI, however, that hasn’t stopped him from holding extreme and intimidating opinions about AI. He believes strongly that AI could be a fundamental threat for humans, unless proactive steps are undertaken fast.

Earlier in 2014, Musk believed developing AI technologies was similar to “summoning the Demon.” It’s always worth thinking about the dangers new technologies might pose, however, we cannot base regulation on worst-case scenarios, as this will restrict many best-case scenarios from coming about.

Moreover, today we are already surrounded by various AI applications, helping make our lives better. AI will not only improve the economy, but also help in saving lives. The world-renowned entrepreneur found a collaborative research and standards recommendation body called OpenAI.

This is not all, Musk recently attended the National Governors Association Summer Meeting, where he preached about the day of reckoning, when artificial intelligence takes over humanity. Addressing a gathering of US governors, Musk stressed on the need to regulate AI “before it’s too late.” Musk remarks, “I keep sounding the alarm bell, but until people see robots going down the street killing people, they don’t know how to react, because it seems so ethereal.”

What does Musk propose for AI development?

Musk doesn’t really want to maximize benefits through his AI initiatives, rather he intends to minimize cost. Musk comments, “AI is a rare case where I think we need to be proactive instead of reactive, because by the time we are reactive in AI regulation it’s too late.” Essentially, he wants the government to intervene and regulate AI.

According to him, the government could setup an agency that gathers knowledge first, before it can regulate. The existential threat that AI poses can only be countered if we take prior preemptive regulation. Through this sort of regulation, we can ensure safe and effective advancements in the field. “We need the regulators to come in and say, ‘Hey guys, you all just need to pause and really make sure this is safe,” mentions Musk.

Regulators can play a huge role in deciding if a piece of AI-based technology is safe. All the players in the landscape must be part of such a drill. Only then, we can ensure that AI development is headed in the right direction.

Should Musk get rid of his paranoia surrounding AI research?

Musk’s brittle regulatory AI development regime will restrict innovation in the US landscape, while pushing it to other shores. This implies that innovators in places like China, India, and Russia will be free to pursue any kind of AI research. However, in the process, they lose the mediating force of caution-minded entrepreneurs like Musk.

Most importantly, this will create a ripple in the global AI space. The US would lag behind in the AI innovation space. This doesn’t mean that the alleged risks associated with AI would necessarily be addressed. Rest of the world would still go about innovating around AI at the same pace, which strikes concern for Musk.

Moreover, Musk categorizes all AI applications into one potentially heinous group, however, AI applications are numerous and varied. They would require a multi-faceted policy regime for regulation. For instance, the policy responses for self-driving cars and assisted medical interventions will not be the same as the appropriate policy responses for online assistants and digital marketing tools. In other words, Musk’s demonization of all AI technologies poses a major threat for both innovation and appropriate policy responses.

Looking ahead into the Future

Musk is also undertaking some really important initiatives in the AI space, which would help in addressing the shortcomings of the technology. His OpenAI venture’s billion dollar budget is dedicated to studying both the risks and the benefits that Artificial Intelligence can bring about.

Besides, we already have many ways to regulate the theoretical dangers of robots or AI systems, which include existing laws, federal agencies, the courts, and a wide diversity of private bodies. All these organizations are working together to devise best practices for robotics and AI.

The advancement of AI not necessarily an existential threat so much as it’s an opportunity to start thinking about the ways humans could be improved by software just as algorithms and machines are constantly modified and upgraded. This shows newer directions for AI research. In other words, Musk must continue to shape AI trends through the productive tool of entrepreneurship, rather than discouraging innovation in the AI space.