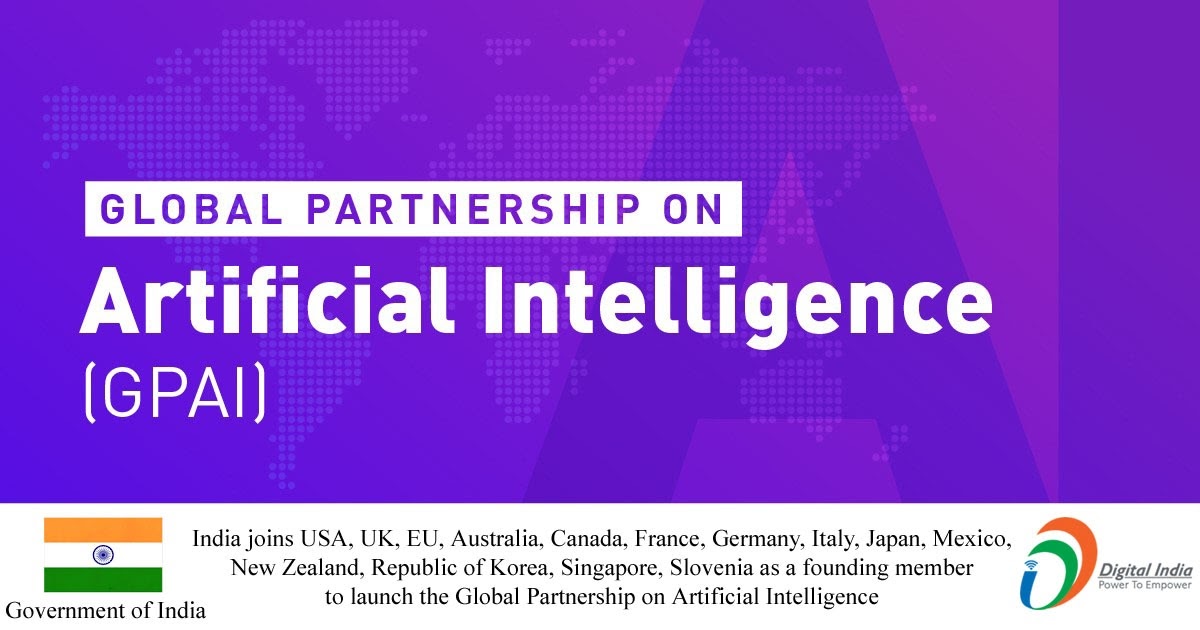 According to the public release, GPAI will consolidate leading experts from industry, governments, and academia to partner and promote responsible evolution of AI, and develop methodologies to show how AI can be leveraged to better react to global issues. For example, a project within GPAI is evaluating how AI can help nations respond to and recuperate from the COVID-19 pandemic, and the economic crisis. GPAI will also conduct research and pilot projects on the responsible use of AI.

GPAI is the first worldwide initiative for better comprehension of the issues and potential around AI utilising the experience and diversity of participating countries. To embark on this goal, GPAI will look to close the gap between theory and practice on AI by leveraging cutting-edge research and applied action on AI-related objectives. GPAI was first officially proposed by France and Canada at the Biarritz G7 Summit in August of 2019.

“We, Australia, France, Canada, Italy, Germany, Mexico, India, Japan, the Republic of Korea, New Zealand, Slovenia, Singapore, the United States of America, the United Kingdom, and the European Union, have come together to build the Global Partnership on Artificial Intelligence. As the founding members, we will back the responsible and human-centric development and utilisation of AI in a manner which is based on human rights, fundamental freedoms, and our mutual democratic values.” the joint statement from founding members of the Global Partnership on Artificial Intelligence said.

As a part of GPAI, participating nations will consider experimentation to create a controlled setting in which AI systems can be easily tested, and scaled-up, as needed. Artificial intelligence is a technology that has the capabilities to enhance the wellbeing of all people, add to positive living standard and sustainable economic growth, increase innovation and productivity, and to help counter major challenges. But experts have shown that the requirement to build a policy ecosystem at the global level to help trust and adopt AI. So, policy and regulatory frameworks are critical to the ethical use of AI systems.

The GPAI will comprise of four working groups each centred on responsible AI, the future of work, data governance, and commercialisation and innovation. The first meeting of the group is estimated to take place by the end of 2020.

What’s The Role Of OECD In This?

Organization for Economic Cooperation and Development (OECD) will host Secretariat of the new Global Partnership on AI (GPAI) in Paris, along with two Centers of Expertise – one each in Montreal and Paris.

OECD will enable the GPAI to create a strong relationship between policy development and technical discussion on AI, by applying OECD’s established expertise on AI policy as illustrated by its leadership on establishing the very first global standard for trustworthy AI – the OECD Principles on Artificial Intelligence.

How Can It Help India?

India has recently been very active in boosting National AI Strategy by putting in action committees and National AI Portal to bring the impact of the technology across various economic sectors like agriculture, healthcare, education, manufacturing, finance and telecommunication. India is a founding member of GPAI and is expected to play a critical role in expanding the responsible utilisation of artificial intelligence for the world.

In the past, the Indian Government has come forward with an AI policy draft and stated its willingness to build an ecosystem in the nation that focuses on a fast shift from the research and development (R&D) phase to the deployment and operation phase for AI systems that are trustworthy and all-inclusive. By working with other global nations, India will be a beneficiary of AI innovation and standardisation that are needed for this technology.

The Government has also evaluated how investments in open datasets can be used to spur AI innovation and research and development that is free of issues like bias and to improve interoperability and use of standards.

“Delighted to announce that India has joined the Global Partnership on Artificial Intelligence or GPAI today as a founding member. This multi-stakeholder international partnership will promote responsible and human-centric development and use of AI,” said Ravi Shankar Prasad, Electronics & Information Technology Minister of India.

Speaking about India’s participation, Dr Omkar Rai, Director General at Software Technology Parks of India, said in a tweet, “India joining leading global economies to launch the Global Partnership on Artificial Intelligence or GPAI is a laudable initiative towards bridging the hiatus between theory and practice, and bolstering usage of AI in cutting-edge research for inclusive growth.”