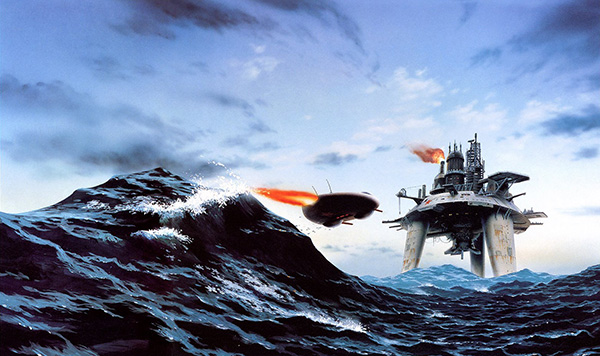 Imagination is the key to innovation, and this is probably why writers have many times thought beyond scientists. For example, numerous books have been written about new tech which have interesting plots revolving around artificial intelligence and machine learning.

Here we present five fictional books that predicted AI way before the technology became a rage that it is today.

(The books are listed in the order of their publication)

Ever imagined having a computer child who has awesome powers but is still emotional as a baby? Thomas J Ryan used the character of a university student named Gregory Burgess who is inspired by the game theory and builds an AI to crack the mainframe. The plot takes an interesting turn when the protagonist realises that the program is not operating in a way he wanted he tries to shut it down, but has started learning, understanding and adapting to its own feebleness. The story became a reality in 2004 when a 17-year-old german created Sasser & Netsky worms which were built for a business purpose but spread through computers by irregular scanning of IP address and forcing them to download the virus.

The Two Faces Of Tomorrow by James Patrick Hogan (1979)

This is a must-read book for anyone who worries about how supercomputer networks can take over the earth. Written by James Patrick Hogan, the book speaks about a future of complex civilization where a world-wide computer network controls everything. The advanced technology includes all logical thinking with an absence of common sense. Its logical decisions begin to cause too many disastrous accidents. It is then that the worried scientists get back to drawing boards to develop a universal, self-aware programming system which is armed with judgment.

Long before the Cambridge Analytica scandal William Gibson predicted the role of corporate power in data usage. The plot of Neuromance speaks about a low self-esteemed hacker who gets hired by an enigmatic detective, who bids treatment in exchange for his services as a hacker. The hacker later realizes the real intentions of the detective. The novel is packed with strong themes about corporate power, AI and misuse of modern technology.

Are you worried about the future data war and its consequences?. have seen how Facebook breached data but couldn’t figure out why they have done so? If the answer is yes, then Islands In The Net is the book that you must read. The story revolves around how the corporates become global powers by turning information into the most valuable currency, while smaller islands and nations become a hub for data pirates and terrorists.

This novel by Neal Stephenson revolves around history, anthropology, archaeology, religion, linguistics, cryptography, memetics, philosophy, politics and computer science. The plot opens in the 21st century of Los Angeles which no longer a part of the federal government of the US. this book can be related to recent Russian government hackers infiltrating the American energy and nuclear business networks. Snow Crush is actually a mysterious computer virus that does harrowing things to the hackers brain in the virtual world.

How Working Data Scientists Can Continue To Increase Their Knowledge