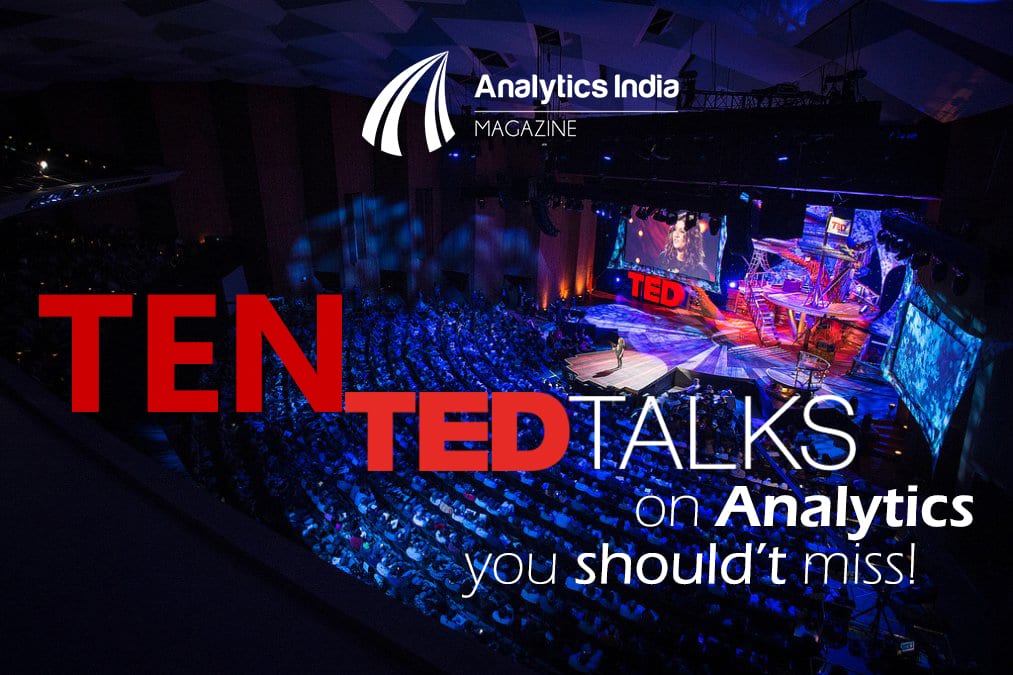 TED is a non-profitable organization, abbreviated for Technology, Entertainment and Design, devoted to “Ideas Worth Spreading” through TED.com. TED Talks share the best ideas from the TED Conference with the world Leaders, trusted voices and convention-breaking mavericks, icons and geniuses, who talk about varying topics in less than 18 minutes.

If you put in the keyword ‘data’ on You Tube, you will get thousands of videos. In fact, on the TED Talk official website, we found about 556 TED Talks on data and about double as many on the TEDx YouTube channel! The whole point of this was to tell our readers that so much is happening around this space globally! Thus, we decided to bring some of the best TED Talks (old & new, organized according to views and popularity) in which Analytics was the core topic of discussion. You will see how people from different domains have integrated analytics in their work!  Feel free to add any more or tell us your personal favorite in the comments below!

Deb Roy, is the co-founder and CEO of Bluefin Labs, a venture-backed technology company while also directing Cognitive Machines group at the MIT Media Lab, where he studies how children learn language, and designs machines that learn to communicate in human-like ways.

In this TED talk, He lectures about new data-driven methods for analyzing and modeling human linguistic and social behavior. Starting with his own son – he had wired up his house with video cameras to catch every moment (with exceptions) of his newborn son’s life, then parsed 90,000 hours of home video to watch “gaaaa” slowly turn into “water.”

This massive data collection and analysis proved to be the base of his work for analyzing relationships between television content and social graph. Bluefin has created a technology platform that analyzes social media commentary to measure real-time audience response to TV ads and shows.

The social structures that he talks about are new as the social media communication channels that are leading to their formation did not even exist a few years ago. Bluefin’s technology platform for discovering these kinds of structures is the first of its kind.

Jean-Baptiste Michel and his colleague Erez Lieberman Aiden, Jean-Baptiste is a Founding Director of Harvard’s Cultural Observatory, where their research team pioneers the use of quantitative methods for the study of human culture, language and history. In this talk, he looks at how we can use large volumes of data to better understand our world using an online tool created an online tool ngrams.googlelabs.com that has been used millions of times to browse cultural trends.

Jean-Baptiste is an Engineer from Ecole Polytechnique (Paris), and holds an MS in Applied Mathematics and a PhD in Systems Biology from Harvard. He holds joint academic appointments at Harvard (FQEB Fellow) and Google (Visiting Faculty).

Kenneth Cukier is the Data Editor of The Economist and co-author of Big Data: A Revolution That Will Transform How We Live, Work, and Think. He has spent years immersed in big data, machine learning – and the impact of both. In this thrilling talk, he looks at what’s next for machine learning and human knowledge and dwells into the future of big data, technology and design.

Philip Evans is a senior partner and managing director at the Boston Consulting Group, and the co-author of Blown to Bits.  In this informative talk, Philip Evans gives a quick primer on two long-standing theories in strategy – Bruce Henderson’s idea of increasing returns to scale and experience and Michael Porter’s value chain. He argues that data will rule business strategy in the future and explains why he thinks these theories are essentially invalid!

Anne Milgram a criminal prosecutor from US talks about how and why she decided to use data to understand criminal justice in a different light. In 2007, she was appointed New Jersey’s Attorney General, where she realized that the criminal justice system relies too often on individual instinct and insight and fails to make use of the reams of data that are generated every day. She later founded the Arnold foundation, where she is the vice president of criminal justice to work towards a data driven justice system.

Susan Etlinger is an industry analyst with Altimeter Group, where she focuses on data analytics. She has conducted independent researches and authored two intriguing reports: “The Social Media ROI Cookbook” and “A Framework for Social Analytics.” In this interesting talk, Susan Etlinger focuses on the need to deepen our critical thinking skills and move beyond counting things to really understanding them.

Data mining innovator Shyam Sankar explains why solving big problems (like catching terrorists or identifying huge hidden trends) is not a question of finding the right algorithm, but rather the right symbiotic relationship between computation and human creativity.

Shyam Sankar is the Director at Palantir Technologies, a secretive Silicon Valley company where he oversees deployments of the company’s core technology, which helps law enforcement teams and corporations analyze giant, unrelated databases for clues to potential –  anything. Palantir technologies has been used to find missing children, to detect banking fraud, and to uncover the Shadow Network, a cyber-spy ring that stooped so low as to hack the Dalai Lama’s email.

Ben Wellington is a computer scientist and data analyst whose blog, I Quant NY, uses New York City open data to tell stories about everything from parking ticket geography to finding the sweet spot in MetroCard pricing. Wellington teaches a course on NYC open data at the Pratt Institute and is a contributor to Forbes and other publications.

This talk was given at a TEDx event where he draws on some key lessons from different sectors and data analysis to make his observations about New York City.

Zack Johnson co-founded Syndio Social, a company that helps organizations adopt change. In this TEDx Program, he talks about how human behavior, organization and employee relationships connect with data and analytics. At a TEDx event, TEDTalks video and live speakers combine to spark discussion and connection in a small group. A 2010 NU graduate, Zack studied social network analysis and later collaborated on projects for the US Army, NASA, MacArthur Foundation and more.

Top TED Talks On Cybersecurity One Must Watch

How To Get Your Child Interested In Data Science

MLDS 2020: Top 10 Talks You Should Definitely Attend This Year