Another 100 projects are in various stages of development 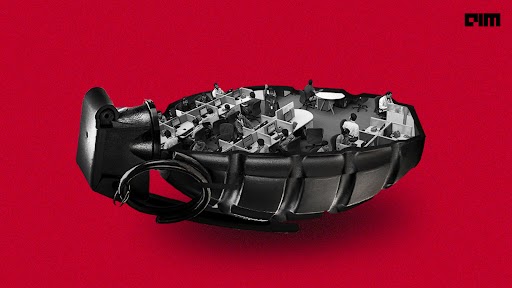 At one point, Singh quoted Russian President Vladimir Putin: “Whoever becomes the leader in artificial intelligence will rule the world”. However, he further explained India’s belief in the principle of ‘vasudhaiv kutumbakam’ (the whole world is one family), and the country has no intention to rule the world.

It is an MLOps solution that eases deep learning development and deployment cycle by providing a simple means to create, edit, and deploy ML models.

It is an Edge AI vision platform that helps monitor machines with alerts and notifications and remote diagnostics.

iSentinel is a deep learning-based threat detection and tracking system that has advanced learning algorithms.

It is a mine detection unmanned ground vehicle (UGV) that can detect and mark mines using an illuminating spray.

Each of these drones is powered with distributed active collision avoidance algorithms. These algorithms compute potential future collision with every other drone and alter its path.

It is an AI deep learning-based identification system that builds a database repository and carries out analysis providing military patterns of enemy operations and prediction of events.

It is designed to plug the gaps in surveillance networks. The army design bureau has also shared its design to produce in large numbers.

DAHAK is an indigenously developed platform that was developed in collaboration with BEL with advanced software and algorithms to perform autonomous operations even in dense maritime traffic and shallow water areas.

This AI-enabled automated room intervention drone systems is enabled with lethal and non-lethal payloads are used to carry out building clearance and urban surveillance in GPS-denied areas.

An AI-enabled ROV has been developed for underwater inspections of marine/civil infrastructure with advanced capabilities for feature recognition.

This AI-enabled chatbot has helped the digitalisation of employee services by providing information directly in their mobile phones.

Distributed Ledger is the concept used for development with necessary identity management and control mechanisms to protect the data shared among different organisations. This proposed use-case solution is planned to provide transparency, security and auditability for file sharing among Defence Public Sector Undertakings (DPSUs) using blockchain.

Choukass is designed to obtain early warning of any intrusions. The information is transmitted through a small in-built NB-IoT satellite module to a customised web portal accessible at its surveillance centres.

DRDO’s object detection and classification system is based on advanced AI algorithms and it helps in border surveillance and monitoring suspicious personnel and vehicular movement.

This toolkit can be used for automatic target recognition, and training pilots against intelligent adversaries.

The tool analyses multi-mode and multi-relational adversary networks. Its potential users are intelligence agencies and defence forces for the identification of criminal tracking.

The system is useful in surveilling naval targets for low, mid, and long-range applications for firing.

The model detects wild animals from the video sequence and triggers an alarm to alert the train operator to take precautionary measures.

Air defence systems can use the module to improve situational awareness and response to enemy intrusion.

This model uses approach for motion pattern extraction and detection in maritime vessel traffic and based on circular quad trees.

Deep Darshak(TM) is an AI/ML-based platform for carrying out analytics on AIS and other ship position data to assist the users in identifying vessels of interest and suspicious activity.

Enhancing UDA by use of AI/ML and other Novel Techniques

The system uses AI to identify the inception of cavitation, tonals and correlate the tonals to data analysis reports.

This system analyses the weaknesses of the android applications. It reports the detected malware and performs audits and exploits (for vulnerability proof of concept purposes) on Android applications. Malware detection is done using deep learning libraries.

The system detects the onset of drowsiness in the driver while the vehicle is in motion.  A camera inside the cabin films the driver constantly.

It is a facial Recognition System for Population Monitoring, Surveillance and Garrison Security. It is an analysis system for identifying and tracking threats for counter-terrorism, continuous surveillance, and monitoring of disturbed areas.

This algorithm has been trained for the face recognition system can see through several disguises like face masks, beards, moustaches, etc.

It is a 360-degree camera monitoring system that assists low-speed manoeuvring by providing the driver with a complete surrounding view of the vehicle in real-time.

It is a system for helicopter maintenance that uses recorded vibration data onboard the helicopter and processes it to compute various condition Indicators (CIs). The AI-based algorithm then uses these indicators to compute the remaining useful life.

It is an indigenised solution that provides comprehensive real-time geospatial situational awareness backed by cutting-edge R&D.

This camera powers the next generation of vision analysis giving the best of worlds in processing power and resolution.

It is an AI-based machine vision system for automatic inspection of surface defects.

This helmet comprises of an optical sensor mounted on the helmet of an active combat soldier, which in turn is connected to a wearable backpack computer of small form factor.

ANPR technology is developed with high accuracy for Indian vehicles. The system can detect and recognise licence plates of different types of vehicles. The module is an integral part of Smart City solutions.

It is a traffic optimisation solution that aims to reduce travel time, delay at traffic signals, and minimise the average waiting time throughout the network.

CMDS protects aircraft against incoming radar-guided missile threats by dispensing flares/chaffs based on the inputs received from various sensors installed on aircraft.

The system provides synchronisation of speed-dependent and turning radius-dependent movement between a driver component and a driven component.

It is an aircraft health monitoring software that uses data analysis techniques to identify trends, patterns, and relationships will predict aircraft behaviour, equipment failure and other future events.

This real-time predictive system has been developed and deployed to predict better maintenance of PCBs by detecting anomaly/failures/early warning and asset conditions parameters.

The project aims at designing a framework for new alloy design using AI and can be used with specific applications for any alloy systems, like superalloys and titanium alloys.

The system uses modern, analytical techniques to reduce the cost of maintenance and downtime. It does so by early identification of imminent equipment failure.

GSL and Infosys have jointly developed the system for OPV class ships using AI. The system predicts the time of likely failure enabling predictive maintenance of main engines installed on board.

AI-Enabled Evaluation of Welding Defects in X-rays of NDT

With an accuracy of 90 per cent, the software has replaced the manual inspection system of weld defects in X-rays of NDT.

BEL has developed this advanced computational models using ML and NLP to identify fake news/sourced from various social media and sound the alarm to users.

The platform has stored sensor data from all the naval ships. It uses big data analytics to predict sensor performance and recommends the best naval ships for mission categorisation.

Camera-stream recorded videos are processed using AI techniques to identify the objects in the scene.

The system uses deep learning technology to identify various human gestures like human walking, crawling, crouching, with or without a gun. It can be easily integrated into a network of IP-enabled cameras.

The system determines the nature of a target moving in the radar’s field of view using its doppler return signal.

The system will monitor dust concentration in open cast mines, process the data using artificial neural networks and actuate the output to switch on the corresponding solenoid driver to do the desired water sprinkling operation.

The system uses AI for human detection. It turns on the equipment lights when a person approaches the equipment to ensure adequate illumination for the operator to climb up to the equipment safely.

The tool is the replacement of X-ray film technique that is used currently in conventional radiography for weld inspection.

This tool employs an advanced phased array ultrasound technique using total focusing approach tools. It is augmented with AI data analytics. This can replace X-ray techniques that are used generally for weld inspection.

This technology facilitates an automated inspection and cleaning of large calibre artillery and tank guns.

It is a technology that can be customised to undertake structural integrity analysis of various types of metal structures and fittings.

The solution enables the operators to take up the most challenging procedures for hands-on virtual training with real-time rectification and performance analytics.

It is a wearable device for speech-to-speech translation that accepts input in one source language and converts it into an equivalent audio/speech of the target language.

It is the only solution in India wherein a GPU-based algorithm can be deployed in CPU-based hardware. Being offline does not entail any kind of dependency.

The system will enable the understanding of the source language without requiring a translator.

This module works uniquely by applying speaker and language recognition functionalities to explore the capability of revealing significant insights into the dynamics of hidden communication.

VACS recognises the pilot’s voice commands and sends the recognised voice command codes to the mission computer for carrying out the Pilot’s intended action.

A platform capable of processing all major forms of intelligence data – audio, video, text and images. Intelligent agencies and frontline positioned units can use the device to decode foreign language messaging.
To learn more about the tools, click here.