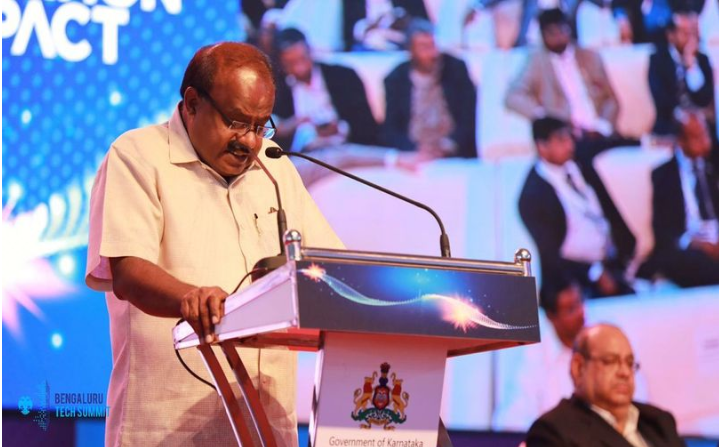 As political parties gear up for the 2019 general elections, Analytics India Magazine walks down the memory lane and takes stock of the times when leaders were quite gracious in praising and educating the mass about the importance of emerging technologies like artificial intelligence and machine learning.

After his tumultuous election win, the Janata Dal (Secular) supremo, HD Kumaraswamy has stepped into the shoes of his predecessor with ease in Karnataka. In fact, Kumaraswamy has been quite vocal about the role of AI in shaping the future of the state’s economy.

Here are some of his best quotes on emerging technology, especially AI:

On turning the state capital into a global innovation hub:  With the government playing a crucial role in bringing various stakeholders from across the country under one roof, state-sponsored Bengaluru Tech Summit has played a vital role in ushering innovation and impact.

While addressing a press meet the CM said, ”Bengaluru has emerged as one of the global innovation hubs in the league of Tokyo in Japan, Silicon Valley in the US and Tel Aviv in Israel. The summit will provide a platform for knowledge sharing on emerging technologies like Artificial Intelligence, Robotics and Blockchain,” Kumaraswamy said.

On addressing creating societal needs: Speaking about the role of emerging technologies at the inaugural function of the 21st Bengaluru Tech Summit, he said, “The new technologies such as artificial intelligence, data analytics, Internet of Things (IoT), blockchain and automation help in providing solutions in diverse sectors and addressing societal needs.”

To attract more investment: The CM has been pushing for investment to turn the state into a hub for development. In order to achieve this, acres of farmland has been identified by the government to set up industrial units across rural Karnataka. Highlighting the importance of emerging technologies in ushering investments, Kumaraswamy said, “Our state’s technology engagement has attracted investments from the across the country and abroad, making Karnataka a favourite for investing in disruptive technologies like Artificial Intelligence, Automation, Data Analytics, Machine Learning, 3D Printing and Robotics,” said Kumaraswamy.”

To create a futuristics state:  Stating that most startups working in the field of IT, ITeS and other emerging tech related are largely concentrated in Bengaluru, the CM highlighted that there is a need for technology solution providers to look into other cities within the state so as to ensure a wholesome state. According to the CM, the government’s vision is to create a futuristic state which technologically advanced, penning his thoughts on the role of emerging technologies in shaping the future in a leading daily he wrote, “The vision for Karnataka 2025 is to establish the state as the torchbearer for India led by technology. Manufacturing processes will undergo a transformation through technologies such as IoT, robotics, 3D printing, artificial intelligence (AI) and machine learning (ML). Karnataka has taken proactive steps to promote these emerging technologies.

On creating more Centre of Excellence in the state: The state capital has always been a hub for innovation and with the availability of qualified workforce has always attracted tech giants to set up their offices and even centres of excellence to conduct research and benefit from their talented skill set. In fact, in November 2018, Intel established their second largest  CoE in Bengaluru with an investment of Rs 1,100 crore.

The state government is also mulling creating a more conducive environment for research and development by constructing more CoEs in the field of AI and ML. Highlighting the areas where the government wish to concentrate on, the CM said, ”Together with research and product development, we are laying emphasis on training and capacity-building. Centres of Excellence have been already set up in areas such as aerospace and defence, IoT, data science, AI, ML, robotics, and cybersecurity.