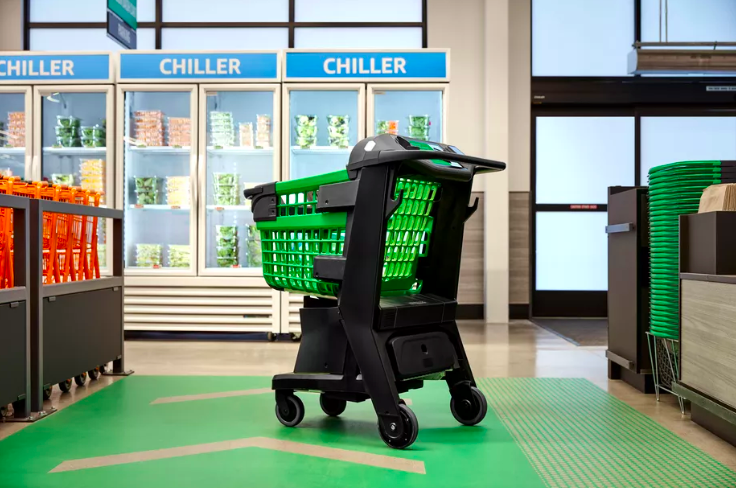 After dominating the online retail market for years, Seattle-based Amazon has been making deep inroads into how people shop offline. After launching its network of Amazon Go stores a few years ago, the company has been building on this approach to come out with another product – Dash Cart.

Ideated to offer a solution to long checkout lines in supermarkets, the latest in Amazon’s offline retail product arsenal is a smart grocery shopping cart that uses computer vision algorithms to identify items placed inside the basket and automatically charge shoppers for the same.

Designed like a traditional shopping cart, it comes equipped with a touchscreen and accompanying hardware components that uses computer vision and sensor tech to detect items with the help of a barcode as they are placed inside the cart. It also notes the number of items picked up, since the current version can only support up to two bags of items at a time.

Once the shopping is over, users can skip the checkout line and instead, take their cart through a special lane which automatically charges their Amazon account when they leave the store, eliminating the need for a human cashier.

“It has a ring of cameras, a computer vision [system] and weight sensors to ascertain not just the item, but the quantity of the item as well,” Dilip Kumar, VP at Amazon’s Physical Retail & Technology division said in a report.

Shoppers first have to scan a QR code in the Amazon app with the reader on the cart, and then add bags to their cart. Amazon Dash Cart uses a combination of computer vision algorithms and sensor fusion to identify barcoded items as they are lowered into these bags. According to the company, shoppers should listen for a ‘beep’ before putting items in the bag, and repeat the process if a light on the cart turns orange, which indicates that the item has failed to register with the system.

What is more, items without barcodes can also pass through the system. Shoppers simply have to tap ‘Add PLU item’, then type in the PLU number, add it to the bag, and confirm weight on the given scale.

This process eliminates the need to scan products since the cart handle automatically makes a note of the items added – and even removed – from the cart, and tallies it with the final bill during the checkout. According to a report, the Dash Cart also allows shoppers to access their Alexa List on the screen and check things off as they shop.

It is slated to be tested at a grocery store in Woodland Hills, California later this year.

Amazon’s effort to establish a strong brick-and-mortar presence by merging the digital and the physical began with the launch of its first Amazon Go store in Seattle, and thereafter, its growing network.

Another cashierless store concept, Go uses cameras and sensors embedded in the ceiling to detect items that a shopper grabs off the shelves, and automatically bills their Amazon account as they leave. With Dash Cart, the company is looking to further build on its technology and offerings in the offline retail space.

However, the company is not looking to merge both technologies yet as the Dash Cart will be launched in a regular grocery store, and not in an Amazon Go store. Perhaps this, like Go, is an experiment by the company to understand which it could scale, and which it should rollback.