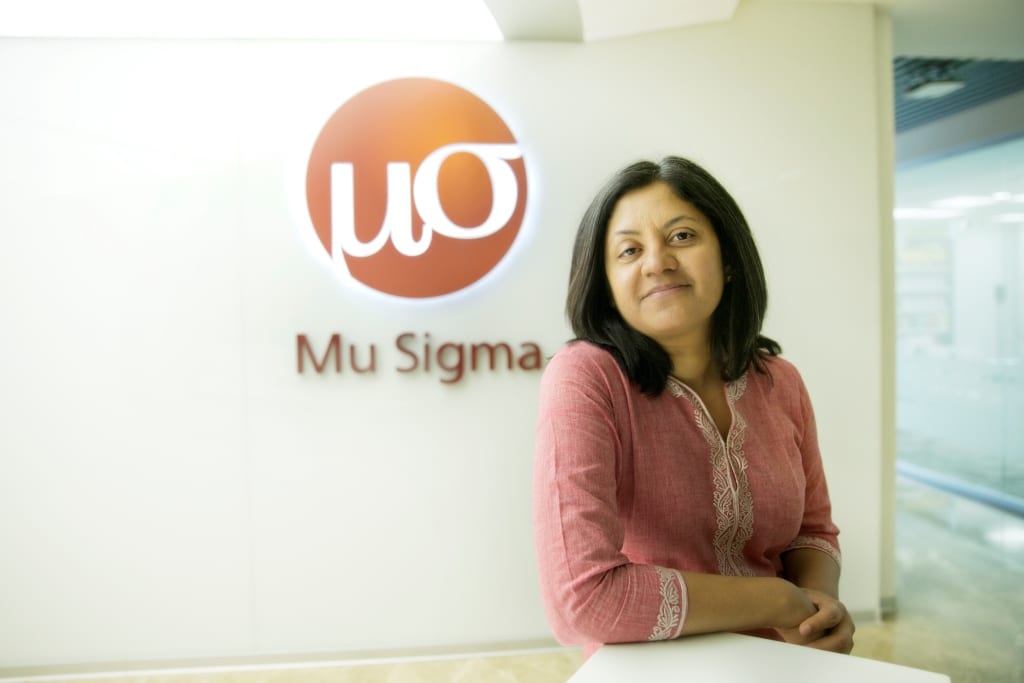 A requiem for Alan Turing Ambiga has been with Mu Sigma for more than eight years, having led functions of talent management, marketing, innovation and product development before assuming the role of COO in February 2012. In that role she drove major improvements to the company’s India operations and the global delivery of products and services to the market. Now she joins an exclusive and short list of female CEOs to lead privately held companies with billion dollar-plus valuations.

“Mu Sigma is moving from its adolescence into its prime,” said company founder Dhiraj Rajaram. “The rate at which we’ve added new clients, combined with the amount of help that our clients demand in realizing the potential of Big Data, led me to this decision to work with them more closely. Ambiga is one of the most design-oriented and operationally strong leaders that I’ve ever worked with. The company had planned for this possibility, and the time is right.”

While Ambiga will lead the company out of Bangalore, Dhiraj will spend more time across the U.S. and other parts of the world to engage more directly with Mu Sigma clients – more than 140 of the Fortune 500. He’ll also spend time designing new offerings for the company’s man-machine ecosystem, forge strategic alliances, and explore options for using the company’s healthy balance sheet to further cement its position as market leader.

“I am honored and excited at the opportunity to lead Mu Sigma in its purpose to help clients adopt a fundamentally new approach to decision sciences and problem solving,” said Ambiga. She began her career in 1998 as a research lead at Motorola, followed by a stint at mobility service provider Kirusa. She holds an M.S. in Computer Engineering, with a specialization in Artificial Intelligence, from Wayne State University in Detroit, Michigan; and a B.E. in Electrical Engineering from Anna University in Chennai, India.

Shailendra Singh, Managing Director at Sequoia Capital – an investor in Mu Sigma – said, “We support and recognize this change as yet another sign of Mu Sigma’s growth. This move will unleash Dhiraj to help large enterprises capitalize on the incredible amount of change they’re facing.”

Founder Dhiraj added, “It’s been a privilege to lead the Mu Sigma team, but I know in my heart that this new role is how I can add the most value to both the company and its clients. Our purpose as a company will never change, but we must occasionally change how we pursue that purpose.”

Altizon on the road to success: bags $4M in series-A

A requiem for Alan Turing