Let’s take a look at the winners of the Swiss Re Machine Learning hackathon in collaboration with MachineHack. 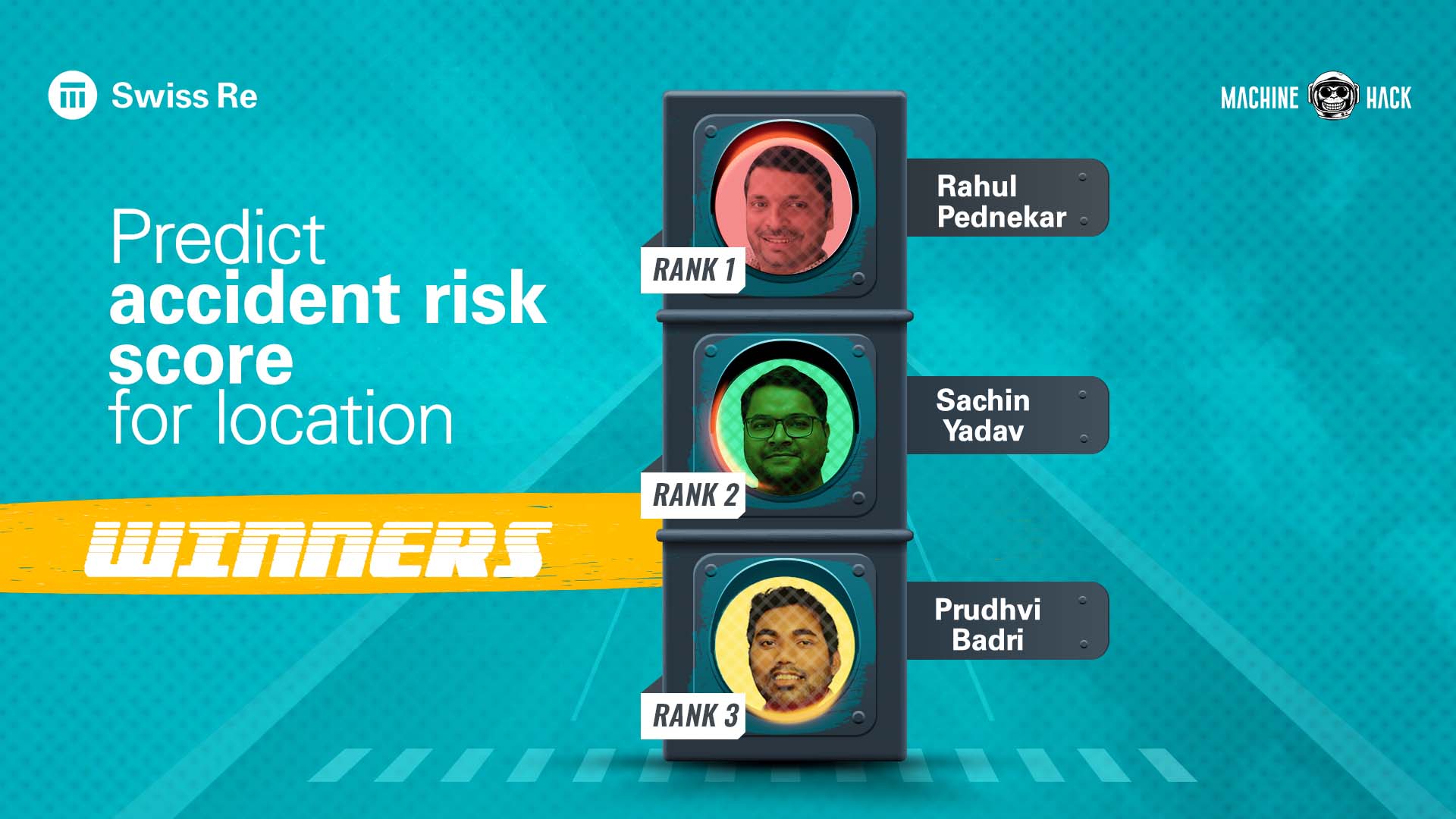 Swiss Re, in collaboration with MachineHack, successfully completed the Machine Learning Hackathon held from March 11th to 28th for data scientists and ML professionals to predict accident risk scores for unique postcodes. The end goal? To build a machine learning model to improve auto insurance pricing.

The hackathon saw over 1100+ registrations and 300+ participants from interested candidates. Out of those, the top five were asked to participate in a solution showcase held on the 6th of April. The top five entries were judged by Amit Kalra, Managing Director, Swiss Re and Jerry Gupta, Senior Vice President, Swiss Re who engaged with the top participants, understood their solutions and presentations and provided their comments and scores. From that emerged the top three winners!

Let’s take a look at the winners who impressed the judges with their analytics skills and took home highly coveted cash prizes and goodies.

“My expertise lies in creating data visualisations to tell my data’s story & using feature engineering to add new features to give a human touch in the world of machine learning algorithms,” said Pednekar.

For EDA, Pednekar has analysed the dataset to find out the relationship between:

Merging of datasets and Feature engineering

Yadav’s data science journey started a couple of years back, and since then, he has been an active participant in hackathons conducted on different platforms. “Learning from fellow competitors and absorbing their ideas is the best part of any data science competition as it just widens the thinking scope for yourself and makes you better after each and every competition,” says Yadav.

“MachineHack competitions are unique and have a different business case in each of their hackathons. It gives a field wherein we can practice and learn new skills by applying them to a particular domain case. It builds confidence as to what would work and what would not in certain cases. I appreciate the hard work the team is putting in to host such competitions,” adds Yadav.

Badri entered the data science field while pursuing a master’s in computer science at Utah State University in 2014 and had taken classes related to statistics, Python programming and AI, and wrote a research paper to predict malicious users in online social networks.

Badri mainly focused on feature engineering to solve this problem. He created aggregated features such as min, max, median, sum, etc., by grouping a few categorical columns such as Day_of_Week, Road_Type, etc. He built features from population data such as sex_ratio, male_ratio, female_ratio, etc.

He adds, “I have not used the roads dataset that has been provided as supplemental data. I created a total of 241 features and used ten-fold cross-validation to validate the model. Finally, for modelling, I used a weighted ensemble model of LightGBM and XGBoost.”

Badri has been a member of MachineHack since 2020. “I am excited to participate in the competitions as they are unique and always help me learn about a new domain and let me try new approaches. I appreciate the transparency of the platform sharing the approaches of the top participants once the hackathon is finished. I learned a lot of new techniques and approaches from other members. I look forward to participating in more hackathons in the future on the MachineHack platform and encourage my friends and colleagues to participate too,” concluded Badri.

The Swiss Re Machine Learning Hackathon, in collaboration with MachineHack, ended with a bang, with participants presenting out-of-the-box solutions to solve the problem in front of them. Such a high display of skills made the hackathon intensely competitive and fun and surely made the challenge a huge success!