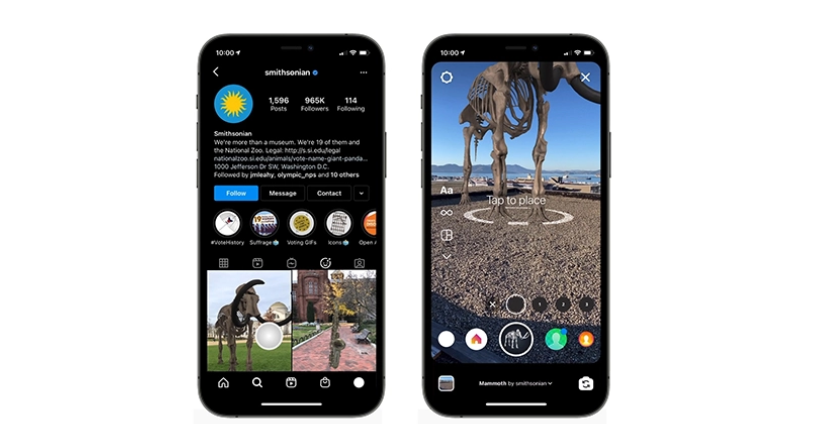 “Now anyone can see the Space Shuttle Discovery prepare for takeoff in their backyard.”

CCS Insights predicted that by 2025, more than half of medium and large businesses in advanced economies will adopt AR/VR technology.

Facebook is one such example who got into this business quite early. When Oculus Touch controllers launched in late 2016, it ushered in a new era of consumer VR by introducing hand presence — the sensation that your own hands were actually there with you in a virtual environment. Today, the team at Facebook Reality Labs have used their augmented reality technology to power one of their applications — Instagram with the Reels feature. This new feature allows people to share experiences across the world in a more tangible way.

The Facebook developer community has delivered React and PyTorch in the past. With SparkAR platform, they are trying to democratise AR technology for creators.

Spark AR is one of the largest platforms for mobile augmented reality, with more than 400,000 creators who have published over 1.2 million AR effects on Facebook and Instagram. Spark AR is developed to help creators with product insights, creation tips, and helps them build engaging AR effects for Instagram Reels.

Built on top of fields like computer vision and artificial intelligence, Facebook is now leveraging this platform to make sharing photos and videos more realistic. People can have a first-person view of highly protected museum artefacts from their smartphones. Apart from entertainment, this feature opens up more doors to interactive education and recreating cultures. As a part of this project, Facebook has collaborated with leading cultural institutions like Smithsonian to bring their collections into AR on Instagram.

“With over 155 million objects in its collections and only about 1% on display in its museums, the Smithsonian is uniquely invested in digital solutions.”

Smithsonian Institution is one of the world’s largest institutes that oversees 19 museums, an effort by the government to preserve heritage. Back in 2010, Smithsonian began 3D scanning its collections to make them accessible to people anywhere. AR effects offer a fun and intuitive way to capture multitudes, showing visual notations of the objects or audio that tells the full tale and take the viewer on a journey of exploration.

Talking about Facebook’s efforts with AR, one of the collaborators, Roei Amit Head of Digital and Multimedia, Reunion des Musees Nationaux – Grand Palais, underlined the importance of their mission of AR supported art advocacy and how it engages the public with playful yet insightful encounters to promote the arts.

Whereas, Head of the Smithsonian’s 3D Program, Vincent Rossi believes that technology like AR allows them to share their collections and expertise with people wherever they are. Education, he adds, is at the core of Smithsonian efforts as the nation’s knowledge partner. And with AR, Rossi hopes that they can bring their priceless collections and expertise directly into people’s homes and classrooms, creating an immersive and personal learning experience.

AR provides the ability to add extra content in different environments. For instance, Versailles is a complex place and AR helps visitors become more comfortable with it. Not only ancient artefacts but Facebook promises that those who are curious can even see the takeoff Space Shuttle Discovery in their backyard.

Technology that preceded AR/VR such as computers and the internet made the world more accessible. Today, AR/VR sits at the cusp of another technological shift and is poised to unleash a flood of creativity, new applications, and new jobs that we couldn’t previously have imagined.