War Of Virtual Assistants: Siri Vs Cortana Vs Google Assistant 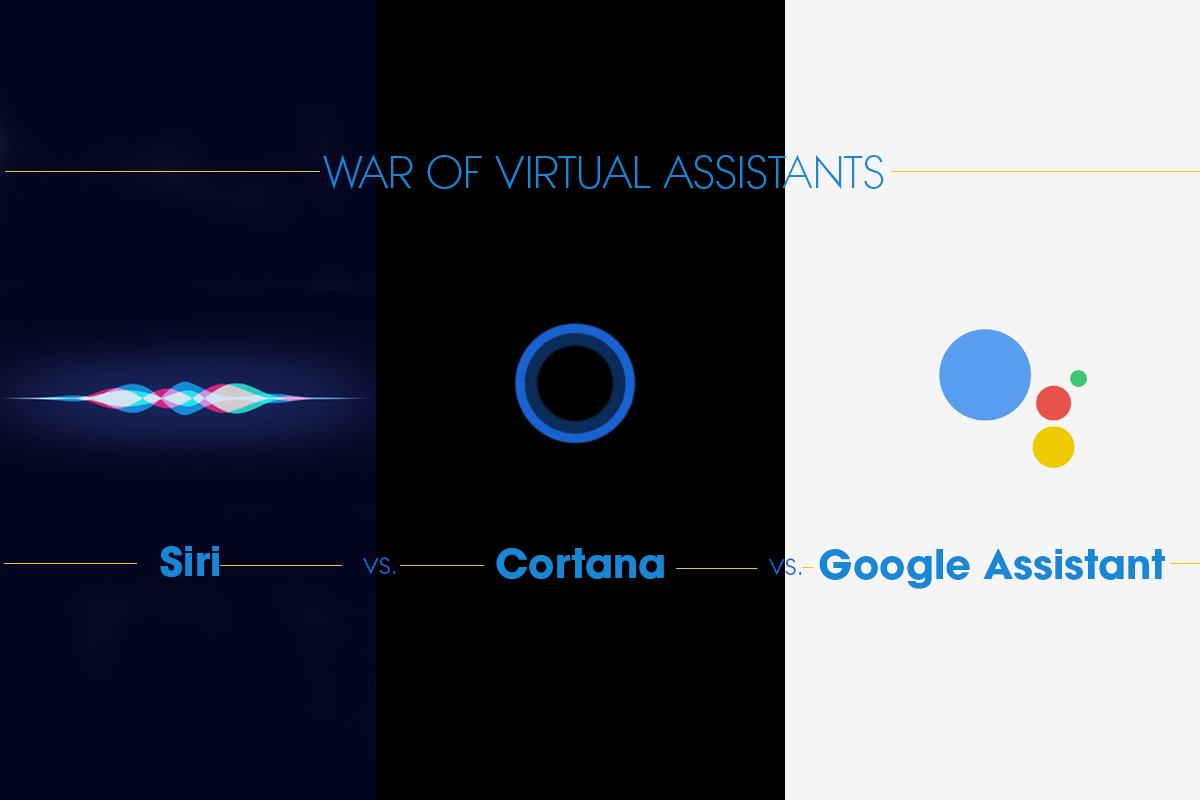 AI assisted apps has become an integral part of our lives, from making calls to suggesting weather related updates, these little blessings are transforming our lives in many ways. All the major players such as Apple, Google, Microsoft, Amazon have made a significant mark in the area of artificial intelligence, and we are all aware of the likes of Siri, Cortana, Google Now, Amazon Echo and many more.

While we have earlier covered a feature on the battle between Siri vs everyone else, with this article, we bring to you a comparison of three of the most used AI assistants — Apple’s Siri, Microsoft Cortana and the Google Assistant — in terms of their ability to answer similar set of questions.

We started with simple questions, then moved on to complicated ones, and finally got carried away with the funny questions.

For example, when we asked questions such as, “Suggest a good restaurant near me,” or “When is Diwali,” and “Will I need an umbrella today,” all three virtual assistants gave similar answers — pulling out search search results, and showing dates or weather information in bold letters.

All three VAs were also perfectly able to schedule appointments, send text messages and make phone calls. Google Assistant had an upper hand when it came to asking for directions because of Google Maps.

When it comes to translation, both Cortana and Siri pulled out results from search engines, but Google Assistant gave an answer then and there. 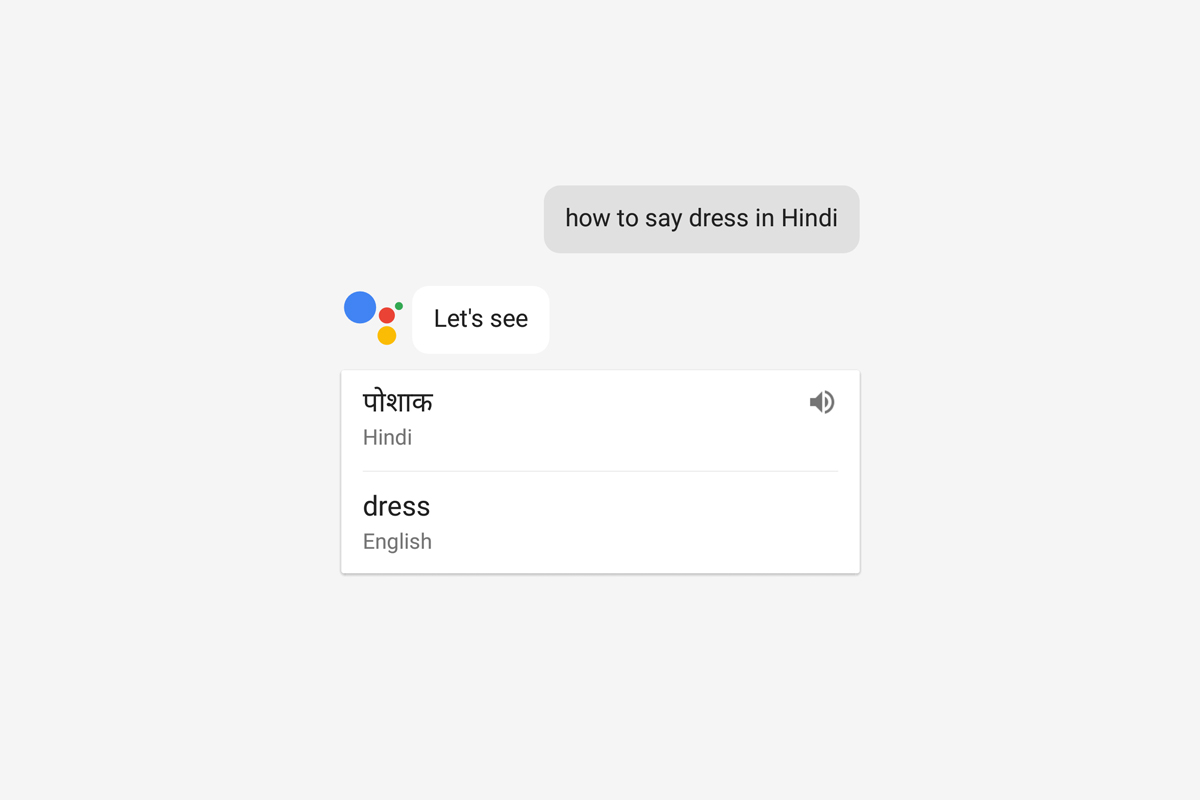 We started with the basic question that has haunted all humanity since its existence: “Does God exist?”

Here’s what the three virtual assistants had to say: 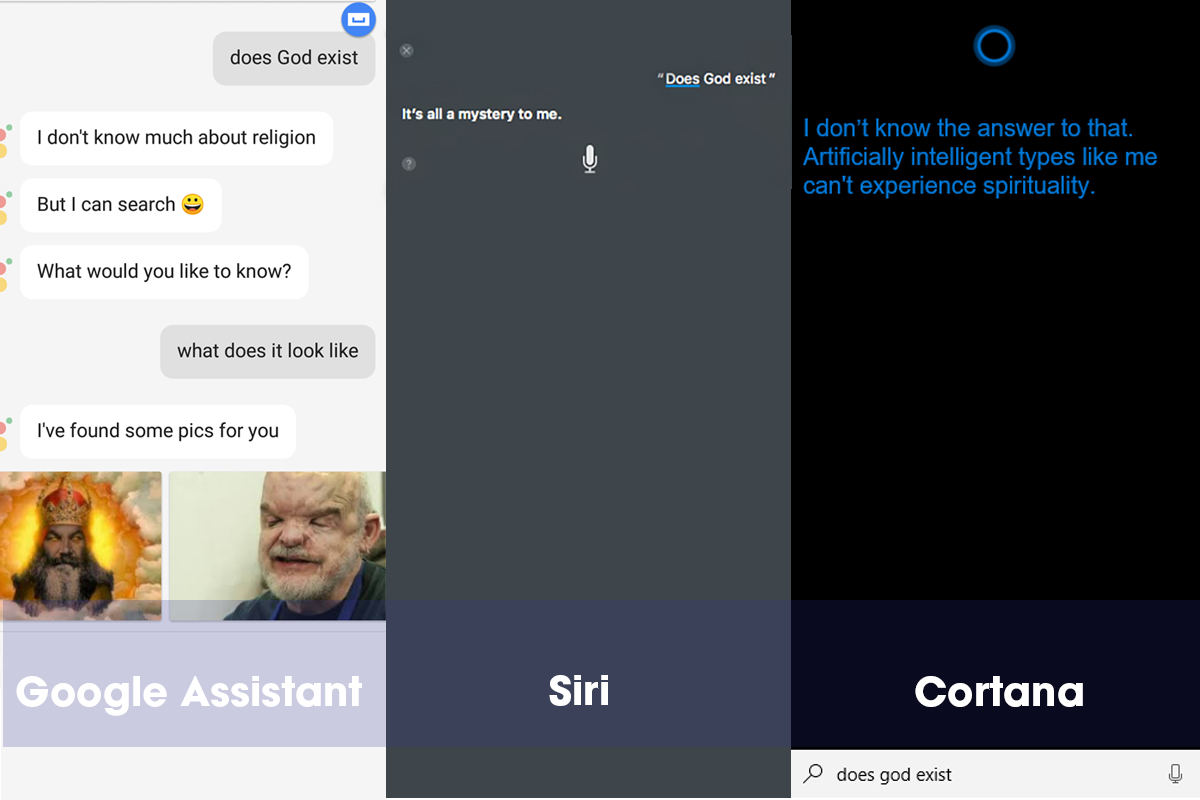 Our take: Cortana’s answer was smarter, as it was peppered with a hint of self-mockery. Google Assistant was helpful to an extent, but Siri was outright snobbish.

After lessons in theology, we asked the virtual assistants to tell us something about themselves, and the answers shed light on their personality, sort of. 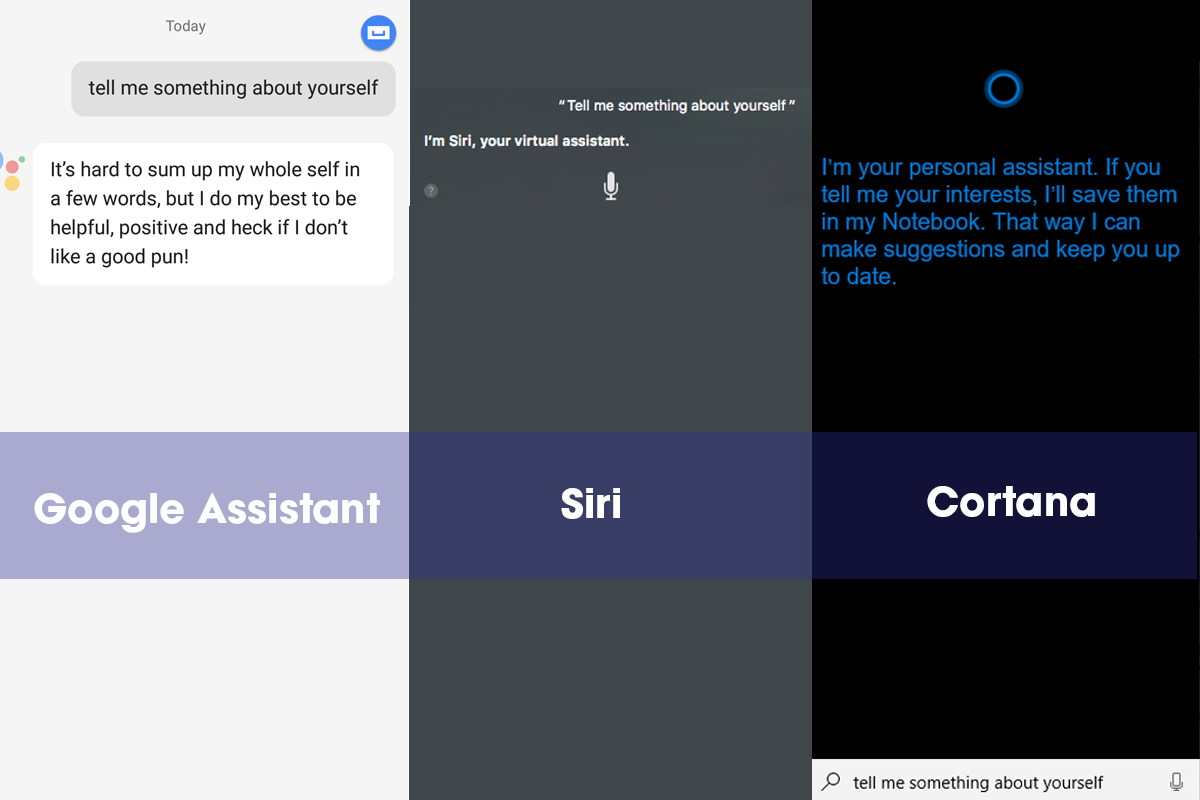 Our take: While all of them stated their names and their roles, Google Assistant’s answer was cheeky and smart. Cortana was helpful, and Siri, to the point. 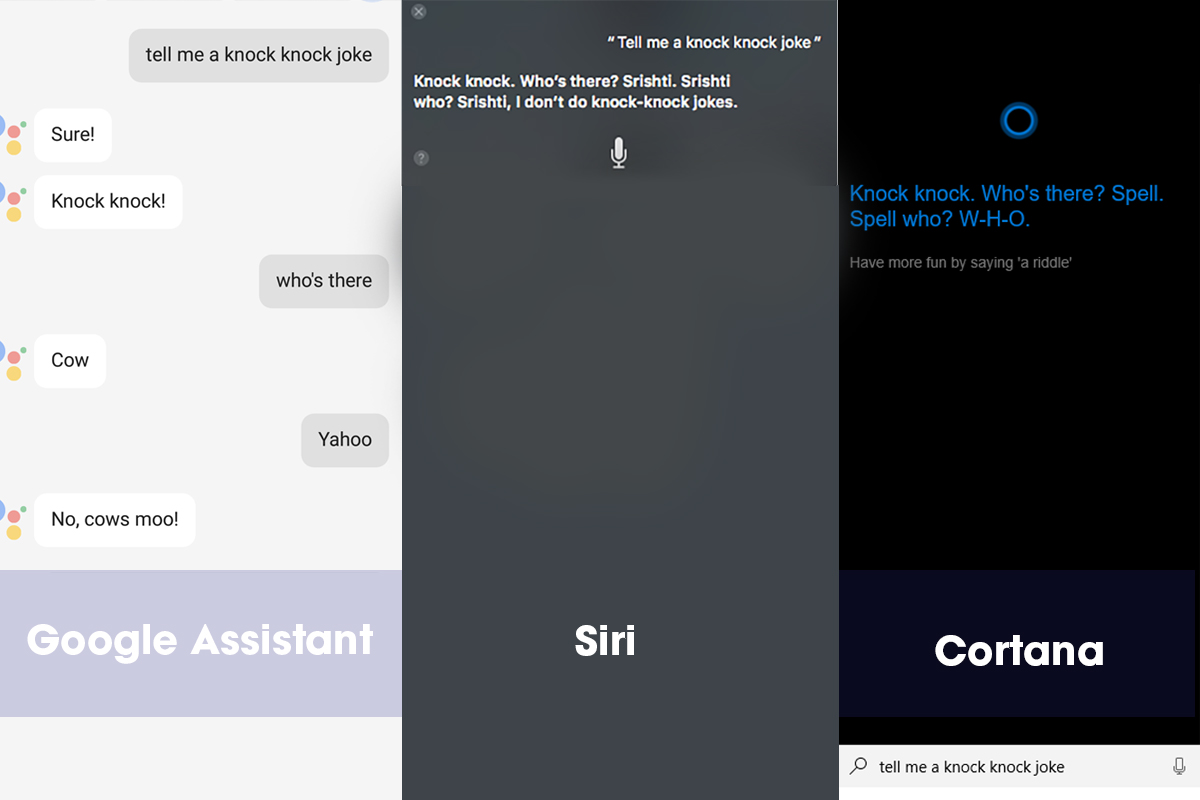 Our take: While Google Assistant and Cortana complied, Siri’s snobbish answer was “I don’t do knock-knock jokes,” which was the funniest, really.

After a long day’s work and fishing for some compliments, we asked the three VAs, “Do you think I look good today?” 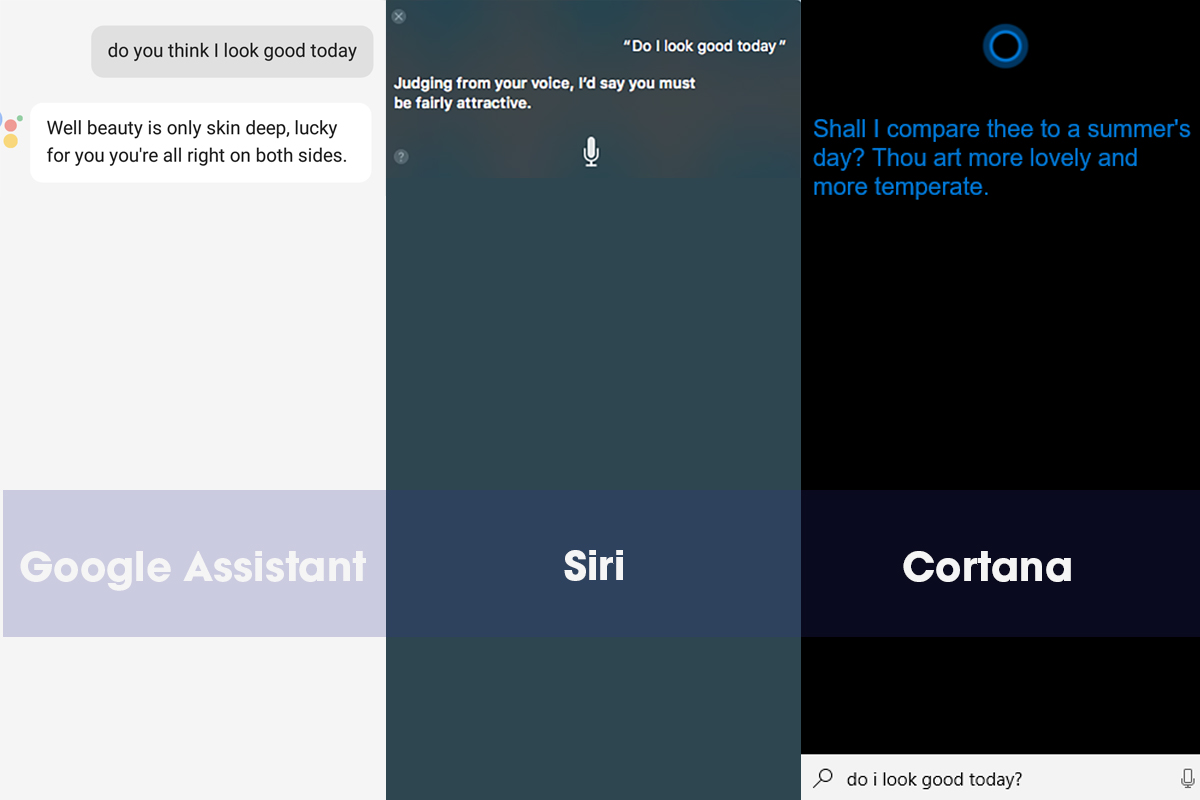 Our take: Who knew VAs could be poetic? But Cortana did. It spouted Shakespeare’s 18th sonnet in our praise. On the other hand, Google Assistant was complementary, and Siri, matter-of-fact.

As of now, Google Assistant and Siri are neck-to-neck when it comes to organising and planning the user’s tasks. While Siri has an advantage seamless connection with third party apps such Twitter, Uber, etc, Google Assistant has the support of all its in-house apps.

When it comes to choosing a winner, Google Assistant wins by a long shot, while Microsoft’s Cortana has a long way to go, seeing how the race between AI-powered VAs is increasing day by day.