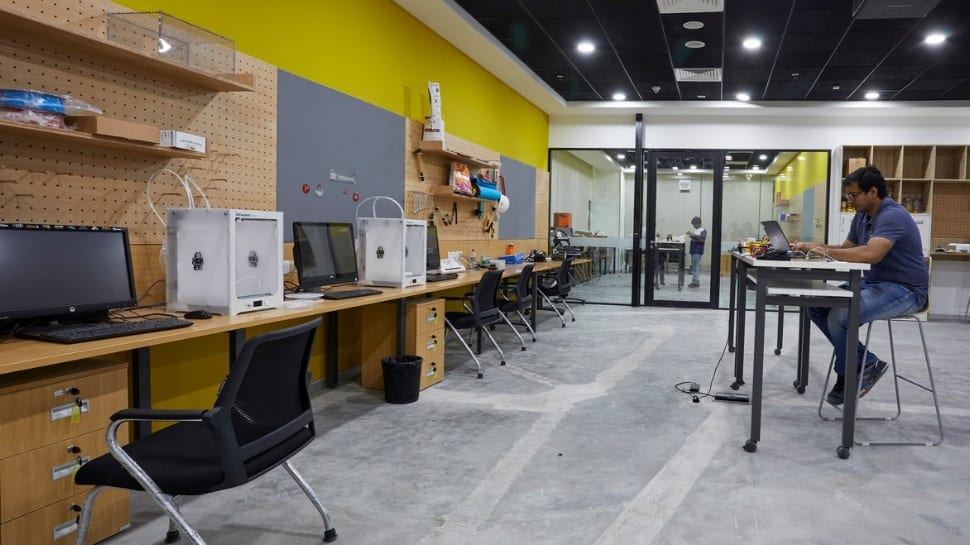 Is IBM A Dark Horse In AI Race? This Is How It Has An Edge Over Its Legacy Peers

No, this is not a typical automobile garage where you will find spanners, pliers, sockets and other hardware lying around. This is a modern garage that is equipped with all the latest tech tools such as 3D printers, laser cutters, PCB milling machines and more. It is a platform that supports and encourages a culture of experimentation, working together across organisations and technology to explore ideas and build prototypes, adding value to existing products. This is Microsoft Garage.

The tech giant formally opened its first Microsoft Garage space in India, to further expand its culture reinvention and innovation among its employees. Spread across 8,000 square feet it is equipped with state-of-the-art facilities. Microsoft Garage is aimed at giving a new platform to its employees to work on the projects that they are passionate about. These projects can be anything — building a new program, improving an existing code or testing a new hardware development — and it doesn’t have to be related to their primary roles within the company.

The 8,000 square feet facility is located at the Microsoft Development Center in Hyderabad and includes three dedicated labs — a Hub for hackathons and workshops, a Makerspace and an Advance Makerspace.

The Garage also has a Reality Room which features a green screen setup that is dedicated to projects around augmented reality, virtual reality and mixed reality, along with space and equipment for projects on deep learning. 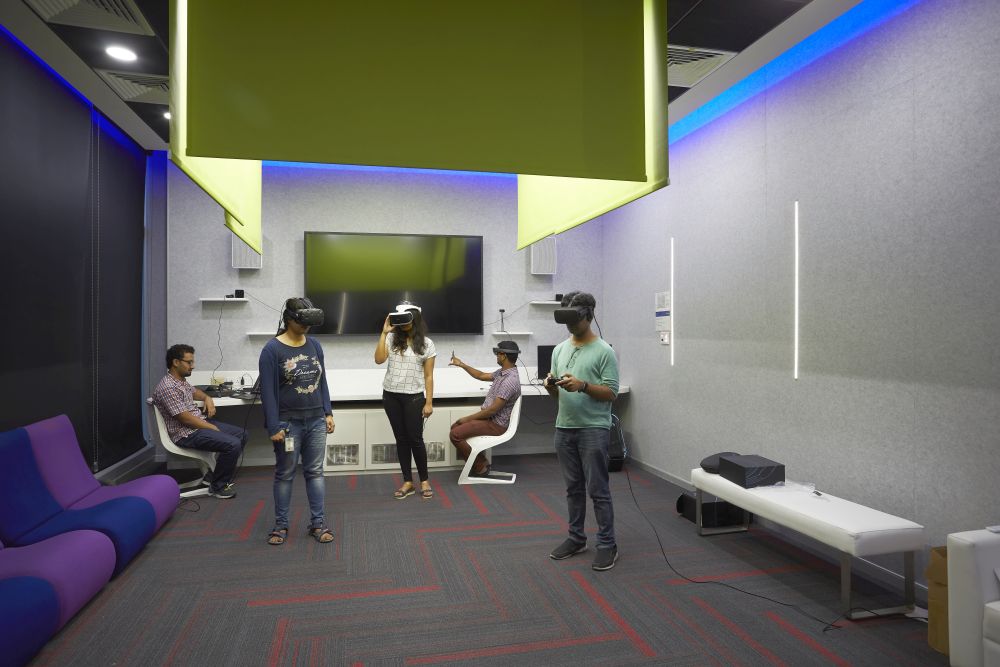 “These technologies could be covering any business area. For instance, you could use AI and drones to solve problems related to agriculture. This does not limit the areas which we work on, but a lot of skill building, prototyping and experimentation start happening in all of these areas. The nature of engagement in these chapters may also vary depending on how emerging the technology is or how advanced we are already looking at it from a deployment perspective,” said Reena Dayal, director at Microsoft Garage – India.

The global team led by Microsoft Garage partner director Jeff Ramos is will also bring developments such as Entrepreneur Incubator Programme in India which will boost new innovation. Reportedly, they also plan to hold multiple training workshops and TED talks to help employees expand their skills and knowledge base.

There is no specific opening or closing timings for the Garage, employees can work on their projects whenever they are free. This flexibility in working hours gives employees a chance to dedicate quality time to their projects they’re passionate about.

“India is a place in the world, outside North America, where we have great people with creative ideas who have a real passion for farming, agriculture as well as healthcare. So we know these are the areas where we will do a lot of exploration,” Ramos said. 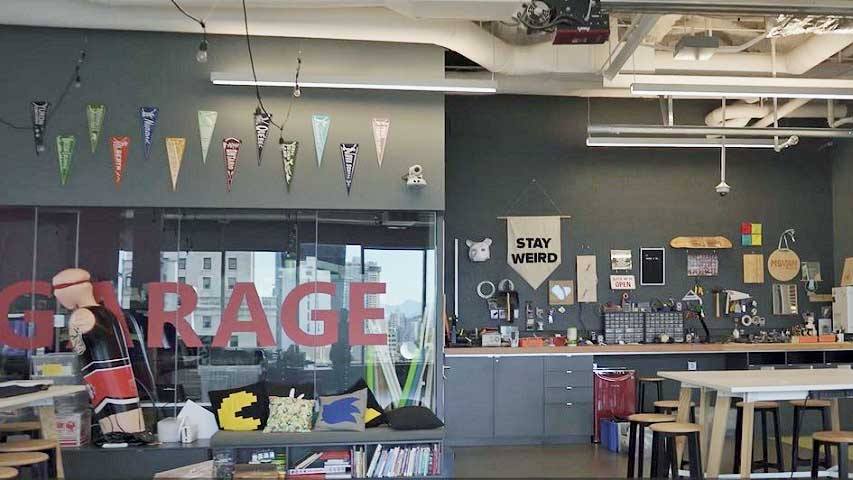 When Did It All Start

The Garage initiative is not new. It began as an offshoot of the Office Labs in 2009 and has grown from a few hundred people back in 2013 to thousands of active employees as of 2016, according to a statement by Microsoft.

In India, has been in existence since 2014, but was recently formally inaugurated in Hyderabad. The company will open its second Garage facility in Bengaluru now, which is expected to be completed by the end of this year. The second Garage will have similar prototyping, fabrication and other IoT development tools at the facility. Reportedly, India is Microsoft’s second-largest work location after Redmond, which employs nearly 45,000 people.

The Idea Behind The Garage Initiative

The idea was to foster a sense of ‘hack-culture’ inside the organisation — giving employees a platform to experiment with new ideas and gain customer feedback. The products and apps that emerged from Microsoft Garage now have millions of downloads collectively as they are launched under the Microsoft brand.

The entire concept of the Garage can be viewed as a smart business strategy to grow innovative products and services under the Microsoft umbrella without any extra cost. However, employees are granted patents for their idea or product that they develop but the end beneficiary is the company since the products are integrated within Microsoft’s own ecosystems of products.

“Microsoft Garage is all about giving a platform to employees to share their passion projects.You may be working on a business to a business project in your day job, but you always had a passion for mobile payments or how peer-to-peer communications could improve. The Garage is your platform to explore that idea,” said Jeff Ramos, general manager at Microsoft Garage.

The ideas that are born in the Garage have to go through the process of proof of concept, prototyping, accelerating before they make their way to the business stage. At the business stage, the products are released for the masses. 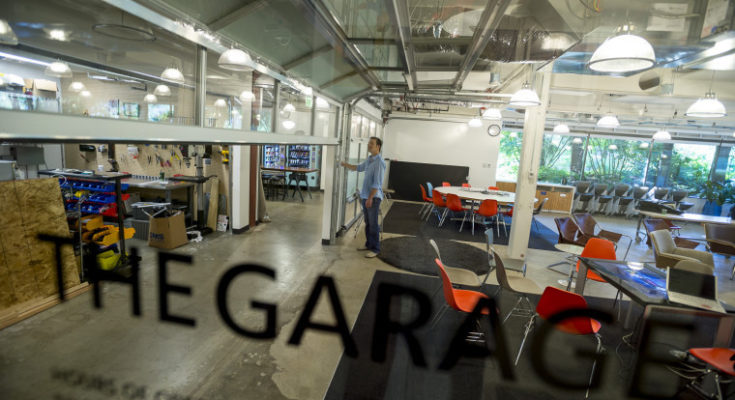 “We do a lot of technical talks to excite people to work in new areas and then create working groups which work on actual prototyping in the labs at Garage. We make available different kind of equipment to people to be able to work with cutting-edge technology. The Garage not only gives you access to equipment, but it also gives you access to a bigger community of people whom you can leverage and get mentorship from, said Dayal.

The best ideas of Garage make it to the Microsoft’s Hackathon annual event, that helps employees to take a step closer to the business stage. Thanks to Microsoft Hackathon, a total of 27 projects and services across all the Garages have made it to the public release.

The plus point of this initiative is that people get to choose their own projects, whom they are working with, rather than getting limited to the structured teams and topics they are normally working on. The Garage team provides required resources to the employees and it also shows them the avenues to market the solutions.

Few of the ideas that are generated at Garage India are:

According to a report, here are some of the products which are currently in early stages of development:

To sum up, besides helping local employees to succeed with their innovations and giving them a global platform to showcase their ideas, the Microsoft Garage is also bringing in local focuses. For example, Microsoft could use AI and drones to solve agriculture problems. A lot of skill building, prototyping and experimentations could happen in these areas.

Is IBM A Dark Horse In AI Race? This Is How It Has An Edge Over Its Legacy Peers