How Will Nvidia’s Increased Focus Into Robotics Pay Off 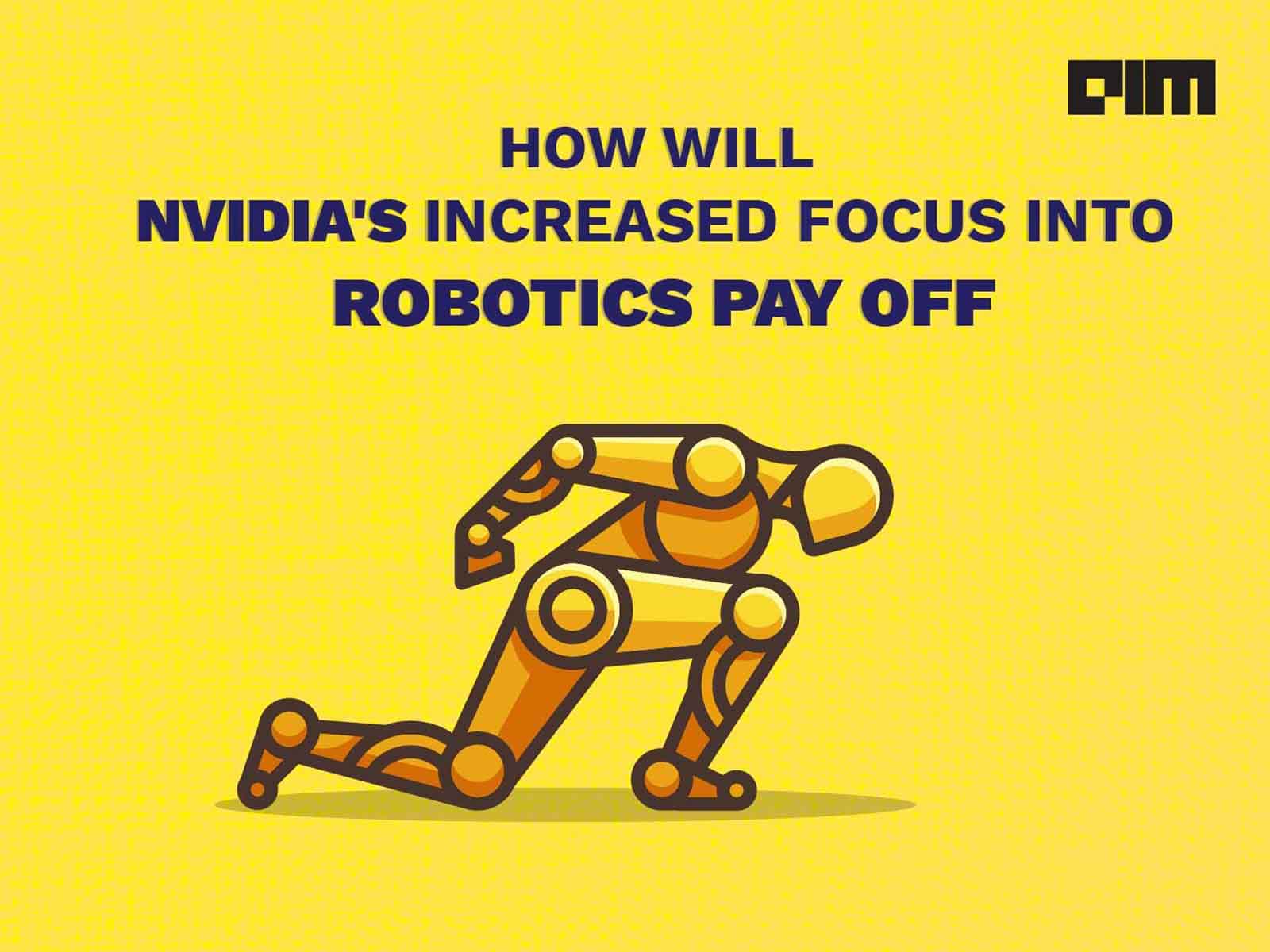 Nvidia’s GPU Technology Conference (GTC) 2020 had a fair deal of announcements from DPUs to Edge AI and more. Robotics was one such area which saw prominent announcements. From a robot developer kit aimed for educational purposes to simulating robots in a real-world environment, Nvidia is showcasing an increased focus on robotics.

Having said that, its focus on robotics is not unheard of. With a dedicated robotics research team, it is enabling next-generation robots to physically interact with the environment and perform complex tasks alongside humans. The new Nvidia AI Robotics Research Lab, which was inaugurated in Seattle last year, focuses on areas such as robot manipulation, physics-based simulation, and robot perception. It exclusively focuses on building next-gen robots that can robustly manipulate the physical world and work alongside humans. It also has an AI research lab in Toronto that focuses on robotics.

In fact, Nvidia’s ISAAC platform for robotics has been in existence long before a dedicated robotics research lab was put forth by the company. It provided companies with a platform to build robots in a faster, smarter and safer way across industries such as logistics, manufacturing, healthcare and more. Nvidia’s Issac Software Development Kit (SDK) provides a comprehensive set of tools, libraries, GPU-enabled algorithms and tutorials to accelerate the development of robotics applications. It is the industry’s first robotic AI development platform with simulation, navigation and manipulation.

Building on the ISAAC platform, Nvidia recently announced the beta of Omniverse platform that will allow collaboration and simulation for customers working in the robotics industry. It is a powerful, open platform built on multiple GPU for virtual collaboration and real-time photorealistic simulation. It allows real-time collaboration powered by Nvidia RTX. It will enable real-time AI simulation with RTX while enabling it to work alongside humans and multi-robot task synchronisation. It will allow interactive robot teaching with a 3D depth camera.

In short, it can be said that Omniverse is a place where robots can learn how to be robots, just like they would in the real world. They can learn from realistic simulations of the real world.

Building on the Jetson family, Nvidia also announced Jetson nano which is an open-source robot platform for robotics enthusiasts to explore the field. The Jetson Nano 2GB Developer Kit is designed to enable people to learn about AI by creating hands-on projects in areas such as robotics and the Internet of Things. It supports multiple sensors and neural networks in parallel for object recognition, collision avoidance, and more, and is supported by the Nvidia JetPack SDK. It is best suited for a new generation of students, educators, and hobbyists.

It is built around the capabilities of Jetson AGX Xavier which is expressly designed for robotics. It has more than nine billion transistors, delivering 10X energy efficiency and 20X the performance of its predecessor, Nvidia Jetson™ TX2. It gives robots the capacity to understand the world around them while ensuring high performance. It is ideal for autonomous machines like delivery and logistics robots, factory systems, and large industrial UAVs.

Will The Increased Focus On Robotics Pay Off?

Being a pioneer in AI chips, hardware and graphic cards, Nvidia had in the past experimented with avenues such as cryptocurrency. While the efforts did not pay off as expected, Nvidia quickly started building upon its strength in AI and robotics to lead the market once again. With AI-powered robots being increasingly used in areas such as retail stores, food delivery and more, Nvidia’s chips are powering a lot of these robots.

Furthermore, it is interesting to note that Nvidia has been using ARM designs for years in its Jetson portfolio of robotics chips. Its recent acquisition of ARM will propel growth in AI and robotics to newer heights. According to reports, Nvidia even plans to set up a new global centre of excellence in Cambridge, building on ARM’s R&D presence.

Along with the acquisition of ARM and its new robotics facility, Nvidia aims to be an innovation hub in robotics. It has in fact begun exploring domestic robots, and with the recent announcements at GTC 2020, it implies that the company is working hard on making robotics experience quite handy and easy for developers in the coming future.