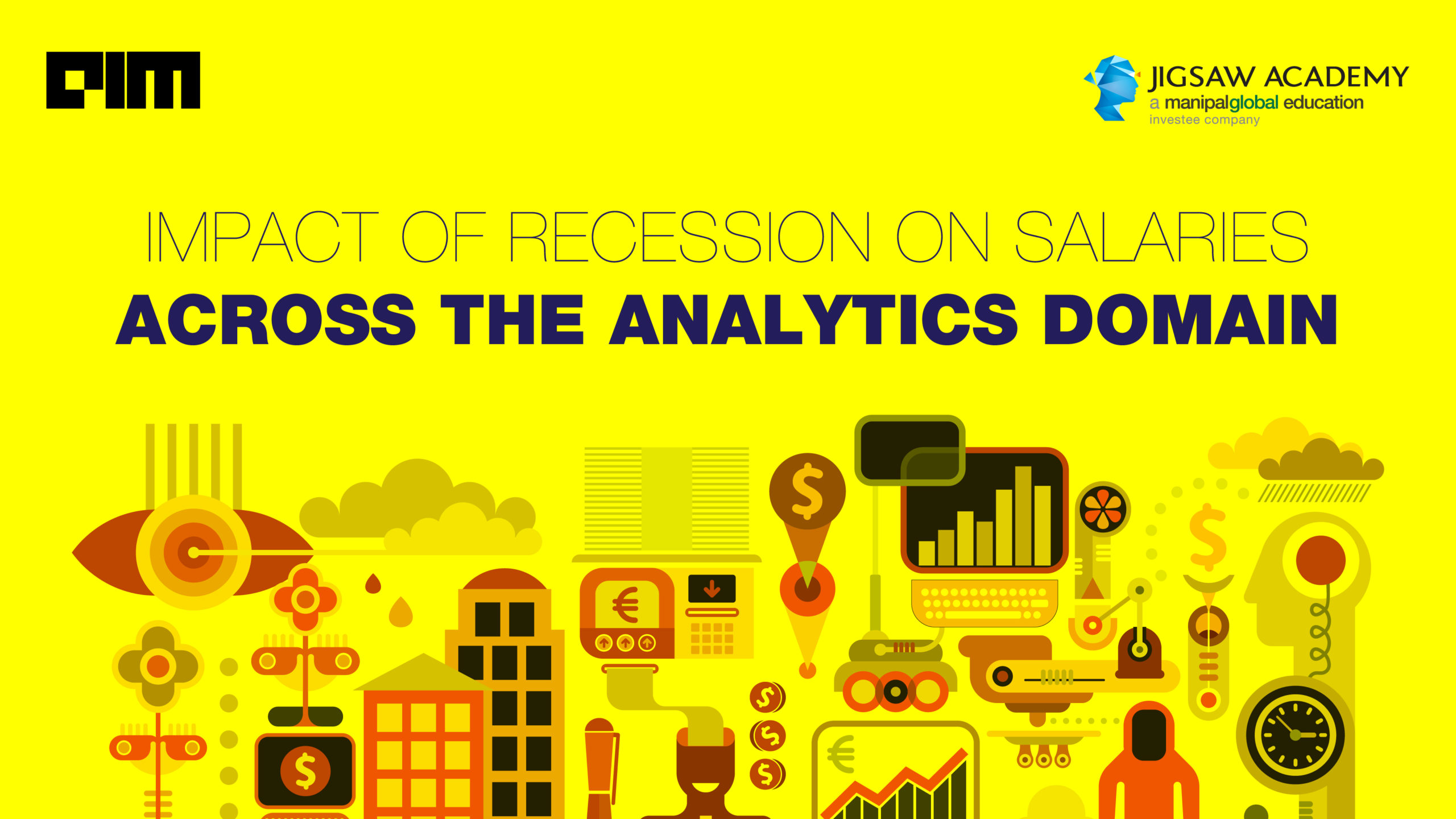 The recession, due to the Covid – 19 pandemic, is already impacting jobs in India, including jobs in the Analytics and Data Science space. While globally the looming recession is significantly affecting employment and jobs across industries, in India the negative impact is expected to be relatively less across enterprises and sectors. Indian IT enterprises, in times of recession, provide cost benefits, along with significant value and efficiencies, to global enterprises, and are able to weather the impact of downturns.

FMCG, Telecom, and Media & Digital firms usually see a moderate contraction in revenues. The BFSI sector, especially the Domestic Banks receive significant support from the Government and the Reserve Bank of India (RBI). Keeping this mind, the current recession might have a corresponding moderate negative effect on the analytics units across industries. On the other hand, the effect of the recession could be severe on the Automotive & Industrials and Captive BFSI firms and their respective analytics units.

AIMResearch in association with Jigsaw Academy has developed this report to estimate the broader impacts of the recession on salaries across the analytics industry – this would cover the short to medium to long-term impact on salaries (sector-wise), and the time taken for salaries to rise to the pre-recession levels.

Hence, AIM Research in association with Jigsaw Academy has developed this report to estimate the broader impacts of the recession on salaries across the analytics industry – this would cover the short to medium to long-term impact on salaries (sector-wise), and the time taken for salaries to rise to the pre-recession levels.

Across the Data Science space, the major cuts in salaries and jobs are more likely in the consumer focused sectors, including hospitality, tourism and non-essential retail. These sectors have seen a sharp fall in demand because of shutdowns across the country, and are expected to recover and reach pre-recession revenue parity only 3-4 quarters after operations are normalized. While the Government of India and the Reserve Bank of India (RBI) have pledged credit extensions, subsidies, and

The Automobile sector, along with the broader Industrials and Oil & Gas sectors, was facing a 10% contraction in consumer demand prior to the break-out of the pandemic. The impact of the current crisis is expected to have a further detrimental effect on demand, which is expected to contract by a further 30% through the course of the recession. These sectors also have the highest capital and operating expenditures across the economy. Hence, the recession would adversely impact salaries for non-core operations, including the analytics operations, across these sectors in the coming quarters.

The Government of India (GoI) and Reserve Bank of India (RBI) stimulus measures are expected to reduce the negative impact on operations across these sectors, as these sectors support millions of direct and indirect jobs in the Indian economy. Also, depending on the financial health of the respective organizations, the organizations could absorb significant costs and losses so as to reduce the impact of the contraction on the various functions and the employees. Nonetheless, the salaries for the current analytics personnel staff could reduce by 22.5%, with retrenchment close to 20%.

Across the IT sector, even if the global and domestic economic slowdown persists, the impact of the current demand on overall operations would be less significant as the sector provides strategic value to its global clients and customers. Analytics is now a core part of the digital offering of IT firms; it also serves as a critical function to analyse Sales, Marketing, and Global IT spending trends; it provides crucial support to many other internal functions, such as Human Resources, Operations, and Payroll.

Performance-linked pay and salary hikes are expected to be frozen for the next 4-5 quarters, and thereafter will be no more than 5% across the IT sector (including Analytics and Data Science units).

The impact of a recession on the FMCG, Telecom, Media, and eCommerce sectors is usually as mild as the impact on the IT sector. In the current recession, the operations and demand contraction across firms within these sectors is expected to be 8-10%. A corresponding- contraction in analytics operations could be experienced across these firms. However, salary reduction might not be more than 7.5% as these sectors usually see a rebound in customer demand once the recession ends.

The Captive units are expected to be adversely impacted and a corresponding effect could be felt on the analytics functions. There might be an immediate impact on retrenchment in the Captive BFSI. The Captive Pharma sectors could face a relatively milder impact as pharma captives would continue to provide critical support to their international pharma units.

For the Captive BFSI sector, retrenchment could be as high as 25%, while salaries for current personnel might reduce by 20% across levels. In spite of 25% retrenchment and significant cost-cutting in salaries, there would still be a freeze on pay hikes and variable compensation even for high performing employees in the Captive BFSI sector. Salaries offered to new hires would be about 25% less than that offered before the recession started. For the Captive Pharma sector the contraction in salaries for analytics professional would be about 8-10%.

The domestic BFSI sector, especially the Banking industry, will face a significant impact of the recession. As transaction volume, trade, and investments fall across industries during and after the recession, the operations of Banks and other Financial firms would drop by a corresponding amount. Hence, in the current recession, the operations of banks, in terms of transactions and operations, are expected to shrink by about 30%.

However, the direct stimulus and ease of access to capital enabled by the Government and the RBI would help the banks to curtail the transaction and operations loss to about 15%. The Analytics function, however, might not receive a direct proportionate impact of these relief measures and current salaries might be reduced by 17.5% across this sector, with about 10-15% of the personnel retrenched. Moreover, once the recession ends, the curtailed salaries will not be increased to the pre-session levels and the salaries of new hires would be about 15-20% less than the salaries for similar hires before the recession.

This implies that there is a correspondingly higher proportion of open jobs in the middle level salary brackets. Jobs in the entry-level salary bracket have a seen a proportionate fall – this is due to the reduction of entry-level jobs offered across organizations, as personnel joining these positions typically require intensive training and time to deliver optimum results across their roles. In a recession, these costs cannot be borne by organizations, hence the proportion of entry level jobs is significantly reduced during a recession.