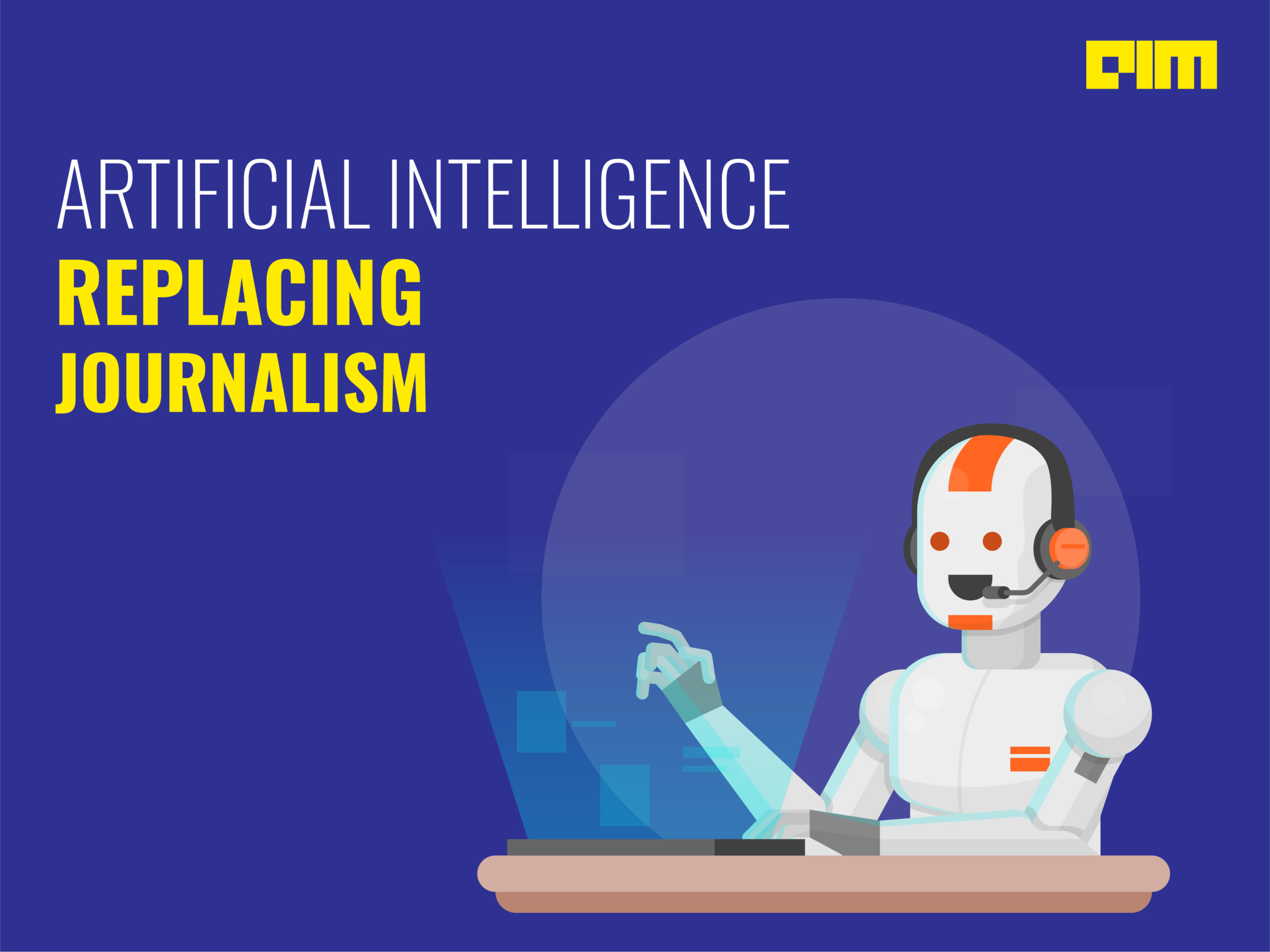 With the advancements in the field of artificial intelligence, many sectors have been in fear of losing human employees over this advanced technology. And with the rise of machines amid this crisis for business continuity, the fear has started looming in the journalism industry where media houses are publishing automated news for their publications.

In fact, Bloomberg News, one of the leading media publishing houses, has claimed that the company has been using automated technology for publishing one-third of their news content on their platform. According to news reports: Editor-in-chief John Micklethwait of Bloomberg News stated in their company memo a few years back, “I think automation is crucial to the future of journalism in a much broader way than many of us realise. Bloomberg already uses automation for customised news and trending stories …”

Also, in the recent news, Microsoft has announced laying off a considerable number of journalists from their MSN in order to replace them with artificial intelligence. These laying off people included contracted news producers, who have been curating news for MSN homepage to which, one of the terminated contractors said to the media, “It’s been semi-automated for a few months, but now it’s full speed ahead. It’s demoralising to think machines can replace us but there you go.”

The automated machine will use algorithms to identify trending news stories and curate them from their publishing partners for their MSN website. Similar to human employees, it will also rewrite the headlines or add better photographs if required and make slide shows. The Australian edition of The Guardian media has also made headlines with their first robot-assisted article — “Political donations plunge to $16.7m – down from average $25m a year.”

A lot of this could be attributed to the pandemic outbreak where media and publishing houses, similar to businesses from other sectors, are also relying on emerging technologies to keep up with the face-pacing landscape. Microsoft has been one of many tech giants that are leveraging robot journalism to cut costs. Joining the initiative, Google has also recently announced the power of machine learning for journalism. With their project — Journalism AI, the company has been urging journalists to take up their free training course to understand this advanced technology and how it can impact the industry.

So, with media publishing houses relying on artificial intelligence and news bots as one of their vital resources to report the news, does this create a threat among journalists to lose their jobs?

Many reports have stated that automation will replace jobs, whether it be in the BFSI industry, healthcare or the core industries of the country. Therefore, many think that AI can also replace reporters and journalists in writing and reporting news. This is possible as companies are building advanced machines that can understand language and use data to replicate the type of content humans produce.

Media houses like The Washington Post and The New York Times have been using news bots to report and write the news. In fact, The Washington Post has been using a bot called Heliograf since some time to publish news for their publication; the bot helped the website successfully report the Rio Olympics and election in 2016.

Although over time, machines are learning to report news like a human, it cannot have the feature of critical thinking that is vital in the field of journalism to find out the truth in a story. Alongside, AI also has a limitation of understanding empathy, which again is an essential ingredient in reporting stories in newspapers. In reality, the core of journalism involves good storytelling of incidents that require asking the right questions and creative writing, and that’s where human intervention makes complete sense. Therefore, it is still being believed that artificial intelligence can only replace humans in areas of mundane and repetitive tasks — which in the journalism industry has been to curate trending news for websites. And that’s why the lay off for the company Microsoft has only been in the areas where humans were being used to curate news stories from other organisations; the company has still retained journalists who work on reporting original stories.

Chief data officer & founder of Applied XLabs, Francesco Marconi, who also recently wrote a book on the future of journalism, told in an interview that — artificial intelligence would automate a minimum of only 12% of reporters’ job which is mundane and repetitive. This will transform the role of editors and journalists as media houses would be able to add more value to their content and create more long-form and investigative journalism.

Additionally, the technology of artificial intelligence has always been scrutinised for being biased in making decisions in various businesses, and it, therefore, cannot be relied upon for curating unbiased news for publications, which is the core of journalism ethics. In fact, in a recent study by experts from Cardiff University and MIT have stated that artificially intelligent robots have possibilities of developing biases and prejudices on their own. According to Professor Whitaker from Cardiff University noted that “It is feasible that autonomous machines with the ability to identify with discrimination and copy others could in future be susceptible to prejudicial phenomena that we see in the human population.”

Therefore, it is believed that, although artificial intelligence will influence the future of journalism but will not replace humans. In fact, it will aid journalists in streamlining their workflow, curating trending news, and can also help in expediting research for journalists by analysing tons of raw data. Furthermore, automated machines can also help broadcast reporters with transcribing interviews, audios and videos for faster production of content.

Artificial intelligence will save journalists instead of replacing them

On the contrary, AI has potential benefits to enhance journalism for the audience and also in providing support to reporters in being more productive by addressing repetitive tasks for them. Alongside, an artificially intelligent system can provide necessary resources from silos at one place for journalists to write more in-depth analytical stories at a much faster pace. Organisations like Quint, Vox, as well as BBC, are also using AI-based tools to find trending news for their publications in order to double their traffic.

In fact, in recent news, Yong Huang, the director-general of one of the most influential media organisations in China — Xinhua News Agency, stated in a release that, “The use of artificial intelligence in preparing news reports is still at the earliest stage of its development, but we are convinced that it will seriously influence the development of journalism and will help news agency employees to do their work faster and better.” He further believes that the advanced technology will help in routine tasks of preparing reports, fact-checking and analysing data, which in turn can help in improving core journalist work.

Alongside, with continuous data being generated, these bots can analyse the data and help media houses in enhancing the content to maximise the engagement of the audience. Condé Nast, a global media publication, has been using an advanced machine called Spire that has been designed to help the publication in predicting their customer purchases and in turn helping in enhancing their readers’ experience. “Spire, our next-gen precision audience targeting platform gives us the ability to follow our consumers and directly connect advertisers with them that they’re most interested in, at the earliest point of their purchasing decisions – when they’re discovering what they want to buy through our content,” said Pamela Drucker Mann from Condé Nast.

On the other hand, BBC has also been using a news aggregation and content extraction API — Juicer — that helps the publication with tagging their news articles with relevant tags for journalists to find latest stories on particular topics quickly. Similar to this, to tag and annotate stories, The New York Times also launched their tool called — Editor — which uses machine learning to tag articles for reporters usage. Advanced systems like these can aid reporters in expediting their research process and cover more grounds in a shorter span of time. These systems also help in fact-checking for journalists, which again is critical to report news authentically.

Furthermore, in today’s era, with information overload, it gets challenging to differentiate wrong information for the verified ones. Artificial intelligence can also help journalists in identifying fake news as well as deepfakes to fight against manipulated media, by verifying news items with a possible number of sources in reduced time than humans. Last year, Reuters, one of the leading multimedia news platforms, in collaboration with Facebook Journalism Project, has announced their courses for their reporters and journalists to understand the world of deepfakes.

Besides identifying fake news and deepfakes, AI can also help in moderating contents for publication, which typically gets curated from third-party sources, and can also help in keeping a check of notorious behaviour in the comments section at a larger scale. Media houses have complex work processes, with the help of advanced AI, media employees can streamline their process of gathering information and producing better content for their readers.

There indeed would be a massive transformation in the journalism industry in the post-pandemic world, and therefore it would be imperative for the media organisations to keep up their pace with technological advancements and rethink ways to produce better and faster content for their audience. And, with media organisations relying on AI and ML tools for generating, creating and curating news, it would be imperative for reporters and journalists to embrace the technologies in their work process.