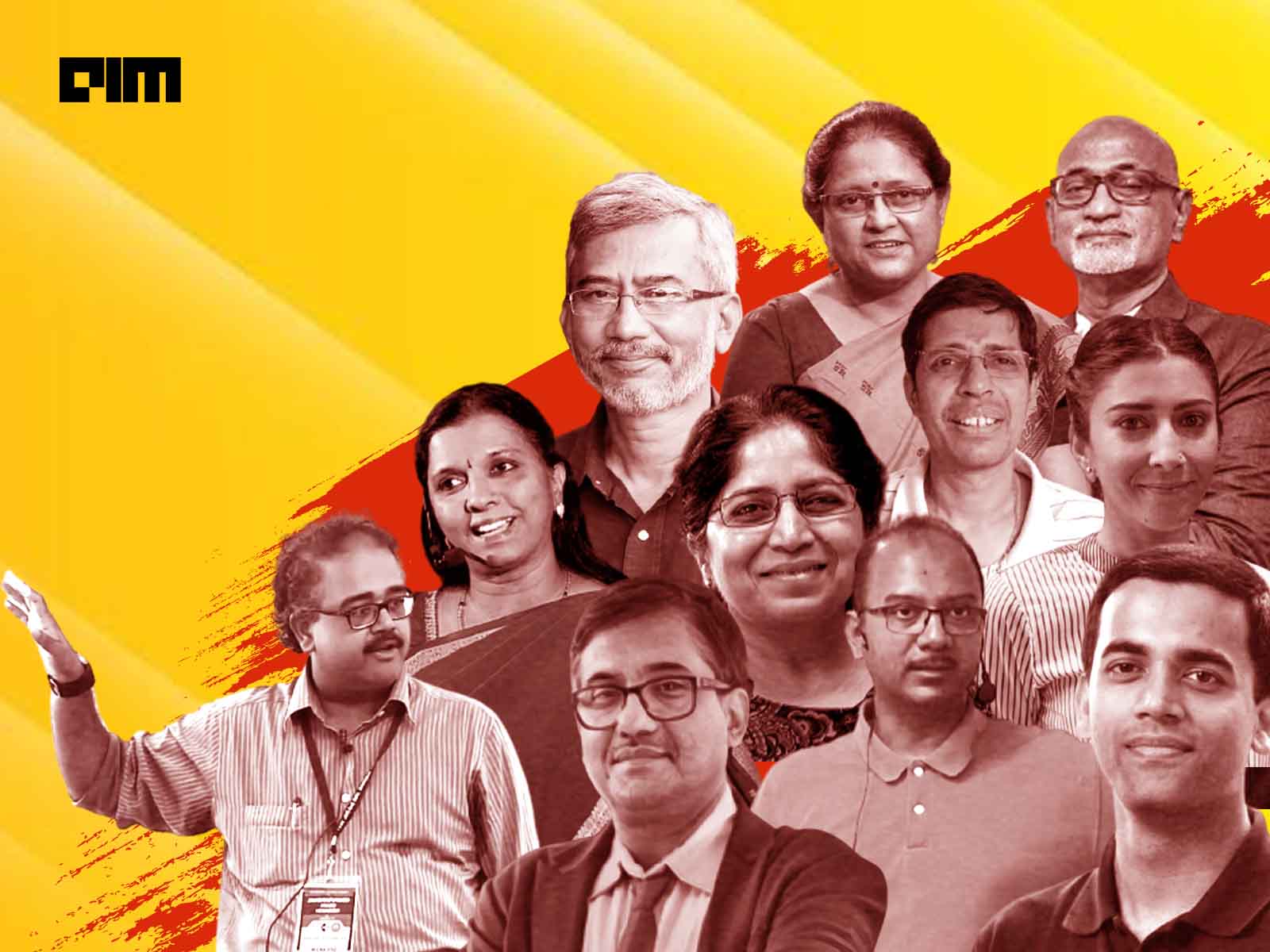 Over a period of post-Independence time, what has really kept India relevant in the global market is its significant progress in the field of science and technology. This has been possible because the country has realised the significance and made necessary investments towards it.

This has helped India produce some of the top names in world science, who have made significant discoveries with a global impact. It is the same when it comes to research and discoveries in artificial intelligence.

In this article, Analytics India Magazine has collated a list of some of the top AI researchers in India, one must know in 2020.

Dr Manjunath is working as the co-founder and CEO of Niramai Health Analytics, a health-tech start-up to detect breast cancer. Her latest research papers mostly focus on the use of AI and technology in cancer detection. Before that, she worked as a research scientist in the IT industry for more than 25 years and has chaired the Bangalore chapter of IEEE Computer Society. A PhD in computer science from IISc, Dr Manjunath has led multiple research projects in AI, cloud computing, semantic web, and mobile and distributed computing for which she has been recognised internationally.

Winner of the Abdul Kalam Technology Innovation National Fellowship this year, Dr Bhattacharya’s research focuses on NLP, machine learning, and AI. He has been working at the IITs since 1988 and was a visiting professor at Stanford University. He has five books and more than 350 research papers to his name. The research proposal for the Abdul Kalam fellowship was focused on the use of NLP or Automatic Speech Recognition (ASR) to improve efficiency, diagnosis and accuracy of the clinical workflow in Indian radiology.

Dr Ravindran heads the Robert Bosch Centre for Data Science and AI at the IIT, Madras. He received his PhD at the University of Massachusetts, Amherst where he worked with Prof Andrew Barto on an algebraic framework for abstraction in reinforcement learning. His research interests include machine learning ranging from Spatio-temporal abstractions and reinforcement learning. His latest research, funded by Google, will lead a team of AI researchers to predict the risk of expectant mothers dropping out of healthcare programmes.

Dr Talukdar has more than 16 years of experience in machine learning and NLP. He received his PhD from the University of Pennsylvania and has worked at IISc for more than six years. Dr Talukdar currently works at the Bangalore branch of Google as a research scientist. His latest research focused on graph-based learning algorithms for large-scale information extraction and data integration, temporal information processing, automatic knowledge harvesting from large data, and neuro-semantics. He also founded KENOME to democratise knowledge graphs that help companies make sense of unstructured dark data.

Dr Sarawagi is the institute chair professor of computer science and engineering at IIT Bombay, who has received her PhD from UC Berkley and has four patents to her name. Her current research interests include sequence models for text and time-series, domain adaptation, effective human intervention in learning, among others. Dr Sarawagi has been on several tech committees over her career, recently joining the IT sub-committee of RBI and the IEEE John Von Neumann Committee.

Dr Chakrabarti has been a faculty in the Department of Computer Science at IIT Bombay for more than 17 years. Before that, he did his PhD from UC Berkeley and was also a visiting scientist at Google for two years. His current research interests include knowledge graphs, complex multi-modal question-answering, code-switch text analysis using natural language processing and searching annotated web with entities. Chakrabarti has 13 US patents and more than 200 research papers published to his name; and has authored one of the earliest books on web search and mining.

Dr Bandyopadhyay works at the Machine Intelligence Unit of the Indian Statistical Institute, where she joined after completing her PhD from the same institute. She was the director of the institute from 2015 to 2020 and has won several awards including the Bhatnagar Prize, Infosys award, TWAS Prize, DBT National Women Bioscientist Award (Young), among others. She is currently a member of the Science, Technology and Innovation Advisory Council of the Prime Minister of India (PM-STIAC). Alongside, Dr Bandyopadhyay has also authored more than 300 research papers and edited six books. Her research interests include pattern recognition using machine learning, bioinformatics, data mining, soft and evolutionary computation.

Dr Aneja is the co-founder of Tandem Research, India and has a PhD from the University of Oxford. Her current research focuses on the societal impact of algorithmic decision making (ADM) systems in India and the possible frameworks of governance. She is an associate fellow at the Asia Pacific programme at Chatham House, UK and a member of the T-20 Task Force for the Future of Work in G20 countries. Dr Aneja has also been a member of government committees on Frontier Technology in India and Skills for a Digital India and has also led knowledge sessions for members of parliament on the use of AI in India.

Among the very few researchers in India working on Ethical AI, Dr De’s research paper was among the six selected by Facebook that focuses on three key areas — governance, cultural diversity and operationalising ethics. His research paper, titled ‘Ethical Implications of Delegating Decision-making Journey to AI Systems’, has the objective of analysing the implications of AI systems irrespective of AI’s outcomes. His research interests are in ICT for Development, Open Source and e-Government Systems. He has also authored more than 50 articles and two books.

With a career spanning in academia and industry for more than 30 years, P Anandan’s is a renowned researcher in computer vision and AI. With graduations from IIT Madras and University of Massachusetts, Amherst, he was a professor of AI at Yale University. Currently, he works as the CEO of Wadhwani AI, which is a nonprofit, independent research institute with the mission of AI for social good. Before this, he worked in research at Adobe as a vice president for research and was the founder and managing director of Microsoft Research India.

The Abdul Kalam Technology Innovation National Fellowship was also awarded to Dr V Kamakoti for his work on ‘Design of SHAKTI Based Secure Microprocessor’. Previously he had also been awarded the IBM Faculty Award in 2016 and DRDO Academy Excellence Award in 2013. He is currently the head of the AI Task Force that has been set up by the Government to prepare India for the upcoming Industrial Revolution 4.0. Dr Kamakothi has done a masters, and a PhD from IIT Madras and also was a postdoctoral student at IISc Bangalore.