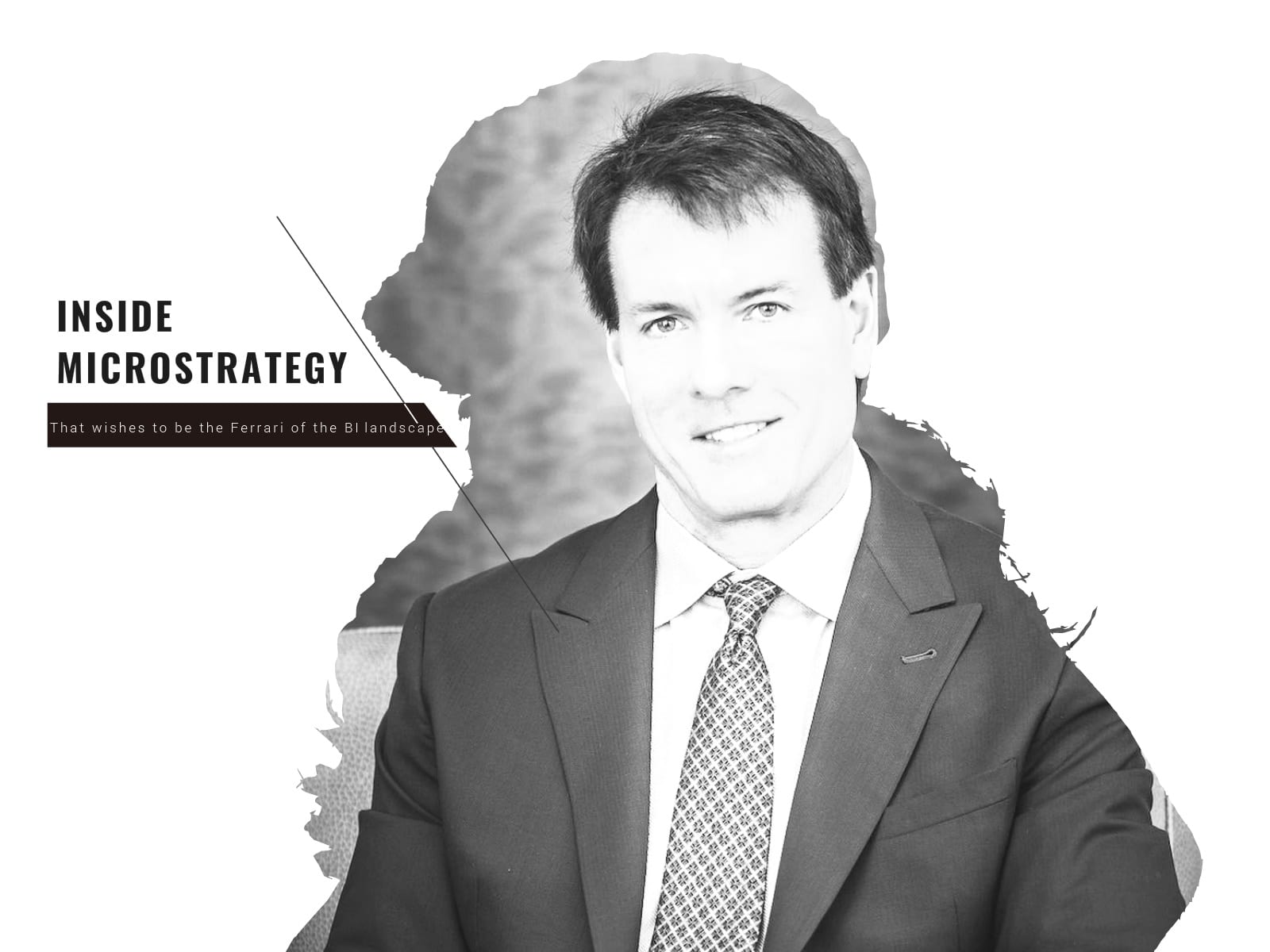 Michael Saylor is no ordinary CEO. So, when 500-plus delegates lined up at a recent MicroStrategy symposium in Bangalore, eyes peeled on the 52-year-old tech luminary, it was little surprise. Needless to say, the delegates weren’t disappointed when Saylor, Chairman, President & CEO, proclaimed that he wanted to make Tysons Corner, Virginia-based company the “Ferrari of the BI landscape.” In an exclusive interview with Analytics India Magazine, the man known as the architect of MicroStrategy talked about steering the company to profitability with enterprise grade analytics, the rise of lightweight competitors, the ensuing price wars, the hype surrounding self-service analytics and dematerialization – an emerging technology trend that’s yet to rear its head.

The comparison to Ferrari wasn’t an offhand remark – it was thought out. Saylor who co-founded the company in 1989 and went public in 1998 has been in “analytics the entire time.” And while some analysts and journalist have implied that innovation in the space is dead, Saylor points to the many evolutions of MicroStrategy to prove otherwise – first it was the client server; then it moved to web analytics and distribution by email; next came mobile analytics, which led to drawing insights from the Internet of Things; and today the product will focus on deploying dynamic analytics environments instantly in the cloud. “In fact, since 2003, hundreds of new technologies have emerged in data analytics, [such as] Hadoop, Spark and MongoDB and they are extraordinarily exciting. What causes software companies to get old is when a CEO becomes fatigued and the investors become fatigued and they lose their commitment to continuous innovation,” he said.

The difference for Saylor and his Tysons Corner company is that he cannot feign commitment to the business nor to shareholders. “I have 75 percent of the voting stock as the principal shareholder of the company. So, I placed all of the capital and all of the energy of the business behind enterprise analytics and mobility, because that’s what really matters to us.  Mobility is part of this, because it turbocharges analytics in so many wonderful ways,” remarked Saylor.

Old guard vs the New guard

Ever wonder what happened to SAP’s BusinessObjects and IBM Cognos? With IBM’s eyes trained to Watson and SAP’s dalliance with HANA, the old guard has given way to new technology. Saylor puts it this way – there are two sets of competitors out there – the old guard: what used to be IBM Cognos and SAP and the Silicon Valley-headquartered Oracle; and the new players like Tableau and Qlik. “If you look at the old players, what’s happening is IBM is supporting Watson and Watson Analytics. They aren’t really supporting Cognos. When you believe a technology is old and tired, you stop investing in it,” he said.

The situation is similar at SAP, which has put all its might behind HANA and stopped investing in BusinessObjects. “Oracle has 100 different architectures and has stopped investing in most of them. They bought 20 of my competitors and I joked that I hope they buy more, because when Oracle buys them, they are generally harvested,” Saylor said.

Tableau and Qlik, ushering in a wave of desktop analytics

New market players Tableau and Qlik brought in a wave of desktop tools that allow data scientists and analysts to create beautiful dashboards. “What Tableau and Qlik did really well was they exploited the desktop to provide really cool tools to data scientists and that was a wakeup call for us. We realized that we needed to provide desktop tools for data scientists so we created MicroStrategy Desktop and we made it free to anybody who wanted to download it. We got 200,000 users since its launch in October 2016,” Saylor shared.

But it isn’t just about desktop analytics. Saylor asserts he has a unified, expansive vision that goes beyond desktop analytics to provide real-time productivity generating applications that can change the game for their customers. “The best enterprises always have something they give away for free. Then they sell the industrial strength version after people have been able to prove the concept. It is the best way to do business. We will continue to add features to provide parity on MicroStrategy Desktop,” he said adding that enterprise analytics and mobility is the path forward for the Tysons Corner company.

According to Saylor, MicroStrategy is the Switzerland in this business and it works out well. “If you look at the new players like Tableau and Qlik, they are losing $150 million a year or more and the problem with unprofitable growth is that when a company stops growing, CEO steps down or they sell the company,” he asserted. “MicroStrategy’s platform is so important to our customers that they cannot risk placing bets in providers that could cease to exist or face structural turmoil.”

Interestingly, that’s exactly what happened with Tableau, that let go its founding CEO, Christian Chabot, in the third quarter of last year and handed the reigns over to Adam Selipsky. But MicroStrategy is committed to being here forever. “That’s why we run a profitable operation, we have a very strong balance sheet with no debt because we are committed to being here forever,” he added.

MicroStrategy 10 established a new standard for enterprise analytics. Its new features and enhancements allow developers to build and deploy transformative analytics and mobility applications. Getting to MicroStrategy 10 was not easy. According to Saylor, there were two emerging trends: data analytics companies being systematically harvested by larger organizations and success in the self-service desktop genre. “So what we did,” he explained, “was take apart our product and put it back together again so we could take enterprise analytics tools together with desktop analytics, the best that a Tableau could offer.” The company successfully took their one product and brought it into the next generation by restructuring and made that investment because they are committed to the business.

“It was built for cloud on AWS, and we rebuilt it for big data and Hadoop enactors that run extremely fast because that’s what the big data world needs,” he added. Then comes the magic of mobile, wherein the platform was open to integration beyond simple mobile applications, but also real-time telemetry communications tools for transactions and authentications by turning any mobile phone into a device that both creates data for and consumes data from the platform.

Going beyond the hype of Self-Service BI

Self-service BI (SSBI) is all the buzz these days but it also brings in a host of issues such as data governance and integration. Though SSBI has transformational power, the hype surrounding it is unescapable, says Saylor who reveals how “Tableau and Qlik spent a billion dollars on marketing this idea and pushed it really hard”. The result – SSBI has outrun its hype cycle. While self-service BI helps to automate processes, reduce jobs and produce better results, difficulties arise with the way end-users adopt the products. Saylor cites an example – if a bank’s 87 different analysts create 87 different dashboards, they may look beautiful, but also calculate different definitions of margin and revenue numbers. At this point, the business hits a wall, because now it has to have 87 debates over which dashboard uses the right KPIs.

In the same vein, Saylor added that the problem wasn’t with self-service analytics, “It is with self-service analytics done on a desktop platform instead of an industrial-strength enterprise platform.” MicroStrategy allows one to do all three forms of analytics – desktop analytics, departmental analytics and enterprise analytics – at a single time. Citing an example, Saylor said if one publishes a set of dataset using the MicroStrategy environment, it is governed and it can be accessible for self-service BI needs. “We do this in our own company where we publish a set of super cubes. We take our datasets and we materialize them in memory so we have instant response,” he said.

In other words, developers can create their own applications embedded in MicroStrategy super cubes. This makes the apps instantaneously fast and marries them to the security features placed in that environment. “You don’t have to learn the data model, security model or the KPIs. All you have to do is format the structure of the dashboard and show it to the executive,” he said.

India, one of the fastest growing regions for MicroStrategy

According to Saylor, MicroStrategy’s business in Asia is growing faster than anywhere else in the world and India is one of its fastest-growing countries. “Certainly, they really like MicroStrategy 10. It has been very popular here,” he said, adding how businesses want to be agile and nobody wants to spend two years to create a datacenter or even buy the hardware for a datacenter.

India presents an extraordinary opportunity, Saylor revealed, saying the MicroStrategy 10 platform is appealing to the Indian market. Over the next 36 months, the company shall also step up its recruitment drive in India, adding more people, Saylor confided. “India has the most sophisticated system integrators and application developers in Chennai and Bangalore. We are now focused on building our direct business here. “I feel like I’ll travel here more frequently, because there are thousands of MicroStrategy practitioners [in India],” he said.

Of late, the company’s joint education program and cloud partnership program with Amazon Web Service has also been very popular.

Saylor prophesizes the end of credit cards, customer card programs and static forms of identification in the next decade. This will pave the way for massive dematerialization and will totally change the way for multi-channel service and sales. “I am not saying you won’t see them around but what’s going to happen is they will dematerialize to a virtual version and that set of revolutionary magical mobile applications will fuel the demand for big data technology, for cloud power and, in turn, for more agile desktop tools, which is where we are investing,” he said, in closing.

10 Most Prominent Analytics Academicians in India-2017

Shining a light on Dark Analytics in the data-driven age

MicroStrategy Education Free For The Month Of April

10 Data Visualization tools that the industry relies on