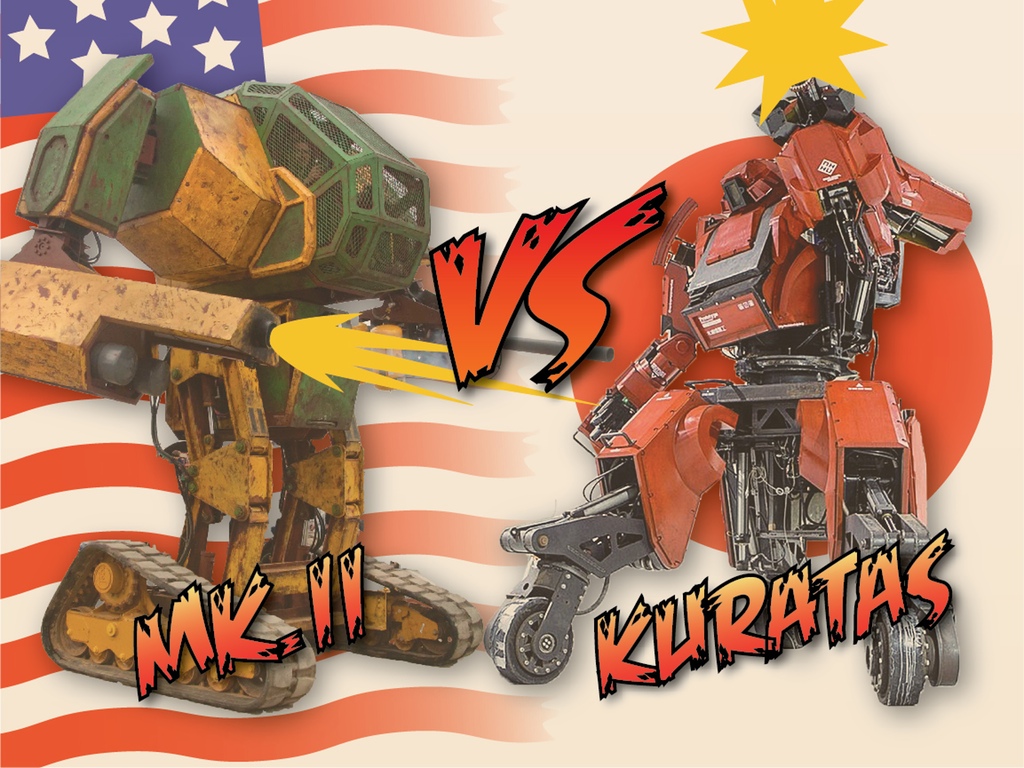 Growing up most of us have binged on movies and TV shows that involve giant fighting robots, or read comics which depict giant mechanized fighting machines. However, these robots were largely consigned to television, games, books, and science-fiction. Now, that’s set to change with a showdown between two massive robots prepare for a hand-to-hand, East-meets-West battle. The American creators of MegaBots have challenged Japan’s Suidobashi Heavy Industry to bring its Kuratas robot to the battlefield, which the latter readily accepted. Seems like the Hugh Jackman starrer Real Steel will be coming to life soon.

Gui Cavalcanti, Co-founder and CEO, MegaBots said “We want to bring the giant robots from science fiction and movies and video games to life because now we have the technology.” The organization was co-founded by Matt Oehrlein, Gui Cavalcanti, and Brinkley Warren in 2014. Japanese organization raised the stakes by suggesting that their robots participate in a hand-to-hand combat, making a departure from American-gun toting bots. Kogoro Kurata, CEO, Suidobashi Heavy Industry taunts, “Come on guys, make it cooler. Just building something huge and sticking guns on it, sounds super American.”

The US Company has a long road to tread, before their prized robot, Mk.II, is ready to throw down instead of firing paintballs. The bigger picture that MegaBots is trying to paint here is to make gladiator-style robot combat into big-time entertainment. Over years, it could turn out to be a mix between Ultimate Fighting Championship and Formula One auto racing. This will lead to development of new industrial technologies, inspiring a new generation of engineers.

Sizing up the humanoid robots

Tokyo-based Suidobashi Heavy Industries designed the 13ft (4m) Kuratas. Kuratas is a mean fighting machine featuring big, agile hands that mimic the movements of the pilot’s hand. Kuratas’ mech is extremely mature. The robot has been sold as a product for the super-rich in Japan in recent years. The robot weighs 9,000 pounds, and is slightly smaller at 12 feet. The machine has a single driver, and doesn’t sport any paintball gun.

In the American corner, the robot has a room for two occupants, one driver and one gunner. Around 15 feet tall, tipping the weighing scale at 12,000 pounds, this piloted robot also sports a paintball cannon that can fire giant three-pound projectiles at more than 100 miles per hour.

The Co-founders built this robot from scratch, while making a cavernous Oakland workshop their home base. Oehrlein remarks, “Our current robot, the Mark II, looks pretty intimidating. The truth is, it’s pretty slow. It’s top-heavy. It’s rusty, and it needs a set of armor upgrades to be able to compete in hand-to-hand combat.”

The Oakland-based firm had earlier launched an online campaign on Kickstarter, through which it raised more than $550,000 from robot enthusiasts around the world. With this fund, MegaBots planned to turn its Mark II robot into a real fighting machine.

The fund helped MegaBots to make its robot faster, tougher, and more balanced, besides equipping the machine with detachable weapons such as a giant chain saw or punching fist. Cavalcanti expresses, “We’re absolutely confident that Team USA can beat Japan. We’ve assembled the best of the best of this country. We’re not going to let our country down.”

Besides, the startup has also enlisted the help of engineers from NASA, software maker Autodesk, and the TV shows including Mythbusters and BattleBots.

MegaBots has finally set and revealed a date when it plans to take on Suidobashi Heavy Industries’ sophisticated piloted mech, Kuratas. The much-awaited fight will happen this year, in the month of August. This date has been announced after two years and several teases on their YouTube Channel. To think about it, I’m sure all robot enthusiasts can barely control their excitement, as the fight is just two months away.

The tournament rule dictates that none of the robots will use any kind of projectile weapon, they will instead have to participate in a complete melee-only combat. The co-founders of MegaBots are currently tight-lipped about the event, about it making history.

Previous statements suggest that the battle will be on neutral ground, however no clear announcements has been made yet regarding the same. Besides, the original venue for the duel had fallen through. The final duel location is being kept a secret because of the earlier setback, and to prevent any further delays. However, viewers will be able to watch the battle for free on YouTube, no matter where they are located.

Robot enthusiasts such as Gordon Kirkwood are eagerly anticipating the fight. “I think it’s going to be a smash hit. This has the potential to be a fantastic spectator sport that people would really pay good money to see,” concludes Kirkwood.

Non-IT Is Also The ‘IT’ Sector For Engineers