Semantic vs Instance vs Panoptic: Which Image Segmentation Technique To Choose 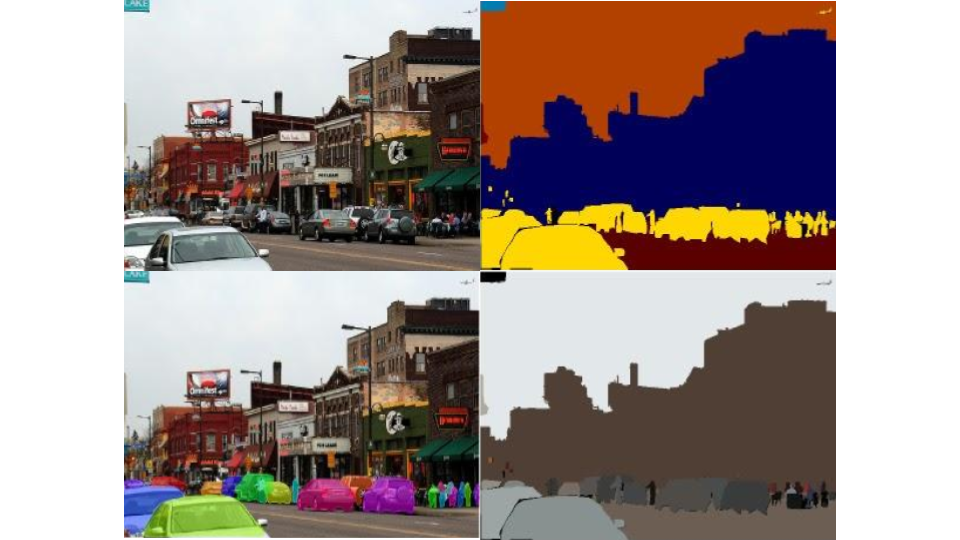 Image segmentation forms the basis of numerous Computer Vision projects. It segments the visual input in order to process it for tasks such as image classification and object detection. However, all the segmentation techniques may not delineate the objects in an image factory with equally satisfying accuracy. Some may be capable of merely identifying the presence of different kinds of objects in the image, some may separate out occurrences of each object type while some others may perform both these tasks. Accordingly, recent image segmentation methods can be classified into three categories viz. semantic segmentation, instance segmentation and panoptic segmentation.

Suppose, you have an input image of a street view consisting of several people, cars, buildings etc. If you only want to group objects belonging to the same category, say distinguish all cars from all buildings, it is the task of semantic segmentation. Within each category say, people, if you want to distinguish each individual person, that will be the task of instance segmentation. Whereas if you want both category-wise as well as instance-wise division, it will be a panoptic segmentation task.

Have a look at the following figure to visualize the above example and have clarity in your mind about the three ways of image segmentation.

There are two basic conventions followed in an image segmentation task which are as follows:

The basic difference between the three segmentation techniques

To combine the concepts of both semantic and instance segmentation, panoptic segmentation assigns two labels to each of the pixels of an image – (i)semantic label (ii) instance id. The identically labelled pixels are considered belonging to the same semantic class and instance their id’s distinguish its instances.

Both semantic and panoptic segmentation tasks require each pixel in an image to be assigned a semantic label. Thus both the techniques are similar if the ground truth does not specify instances or if all the classes are stuff. However, the inclusion of thing classes (each of which may have multiple instances per image) differentiates these tasks.

For semantic segmentation, IoU, pixel-level accuracy and mean accuracy are commonly used metrics. These metrics ignore object-level labels while considering only those at pixel-level.

Since instance labels are not taken into consideration, these metrics cannot evaluate thing classes.

For instance segmentation, AP (Average Precision) is taken as the standard metric. It requires assignment of confidence score to each segment for estimation of a precision/recall curve. Confidence scores and hence AP cannot measure the output of semantic segmentation.

On the contrary, PQ (Panoptic Quality) used as a metric for panoptic segmentation equally treats all the classes – be it a thing or stuff. It must be noted that PQ is not a combination of semantic and instance segmentation metrics. SQ (i.e. average IoU of matched segments) and RQ (i.e. F1-Score) are computed for every class and measure segmentation and recognition quality, respectively. PQ is then calculated as (PQ = SQ * RQ). It thus unifies evaluation over all the classes.

To compare all the three image segmentation techniques, we have applied each of them on a common image. Have a look at the input image as well as the code and output of each segmentation method.

We have used the PixelLib Python library here which has been built for performing segmentation of images and videos with much ease.

Install PixelLib and its dependencies as follows:

(Read our article on the pillow library used here)

Load the xception model trained on pascal voc for segmenting objects. The model can be downloaded from here.

Load the function to perform segmentation

For instance segmentation also, we have used PixelLab library. Install the library and its dependencies as done above for semantic segmentation.

Load the mask r-cnn model to perform instance segmentation. The model can be downloaded from here.

Perform instance segmentation on an image

The Mask R_CNN model is trained on Microsoft Coco dataset, a dataset with 80 common object categories.

We have used MS-COCO dataset, PyTorch Python library and Detectron2 (a PyTorch-based modular library by Facebook AI Research (FAIR) for implementing object detection algorithms and also a rewrite of Detectron library). We have also used the DETR (DEtection TRansformer) framework introduced by FAIR.

Refer to the following links if you are unaware of Detectron, Detectron2 and DETR:

Install the Panoptic API from GitHub for panoptic inference

Compute the probability score for each possible class, excluding the “no-object” class (the last one)

Merge the individual predictions obtained by running the above lines of code into a unified panoptic segmentation. For that, we use DETR’s postprocessor.

The segmentation is stored in a special-format png

Retrieve the instance id corresponding to each mask

Color each mask individually and plot the visualization

Use Detectron2’s plotting utilities to better visualize the above panoptic segmentation results.

Store the panoptic predictions in a special format png

Google colab notebooks for the above-implemented pieces of code:

Did you find the segmentation techniques interesting? Also read: