Google brings “on-device” Artificial intelligence with Android Wear 2.0, the first of its kind

You can now own a smartwatch that has an auto-reply mode and lets you reply “smartly” to the messages based on its context. With this new venture, Google showcases its machine learning prowess yet again and this time on a smartwatch.

Though a lot of machine learning technologies such as deep neural networks are used quite often today, these are accompanied by high memory requirement, intensive computational work or a reliability on cloud, making it more of a hardware intensive technology. 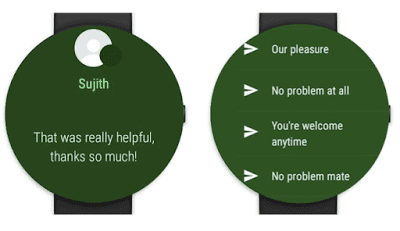 While this might go well with devices such as Amazon Echo or others, it is a big constraint when machine intelligence has to be applied to devices as small and handy as a smartwatch or on IoT devices. But to add a little dose of AI to your smartwatch, while unloading the hardware cram, Google brings “on-device” machine learning, a first of its kind.

Developed by the company’s Expander team, the on-device ML technology aims to bring AI to your wrist as it would facilitate Smart messaging and Smart reply without being connected to cloud or requiring powerful CPUs or GPUs. Responding to messages would be just a tap away.

The technology in detail:

A work that had begun right through the launch of Google’s smart messaging app- Allo, the research got deeper and bigger with Android Wear team approaching Google for a possibility of displaying a “Smart Reply” feature on a smartwatch. Since this would mean running ML on limited power and memory, the team sketched a brand new design that could fit a smart watch.

The team created a small dictionary of common rules that can work for simple prediction task. They built different solution for the on-device ML system, that can use fast and efficient mechanism to group similar incoming messages and project them to similar vector representations. Implying that similar meaning sentences are grouped together so that machine intelligence could comprehend it and respond accordingly.

Based on sentiment and other cues, the ML tools classifies the message, which is processed by the streaming algorithm to create quick trained answers. Since the data is analyzed in bit arrays or in the form of 0s and 1s, the process is quite fast.

And since everything from processing incoming messages to predicting a reply is done on-device, without the data leaving the device, it reduces the memory footprint as well. The messages are computed on the fly without the need for data to be stored.

One drawback however is that the AI feature is not intended for complex languages involving vocabularies and wide language variability.

This on-device machine intelligence can be applied on any watch that runs on Android Wear 2.0 and on Google watches.

“When we embarked on our journey to build this technology from scratch, we weren’t sure if the predictions would be useful or of sufficient quality. We’re quite surprised and excited about how well it works even on Android wearable devices with very limited computation and memory resources”, Sujith Ravi, Staff Research Scientist, Google Research posted on the company blogpost.

Google has time and again displayed its ambitions on a business driven by machine learning and AI capabilities- whether it’s the Google Pixel, Google RAISR or even turning a game into platform for AI research. And after Android Wear 2.0, it would be exciting to see what Google does next in this field.