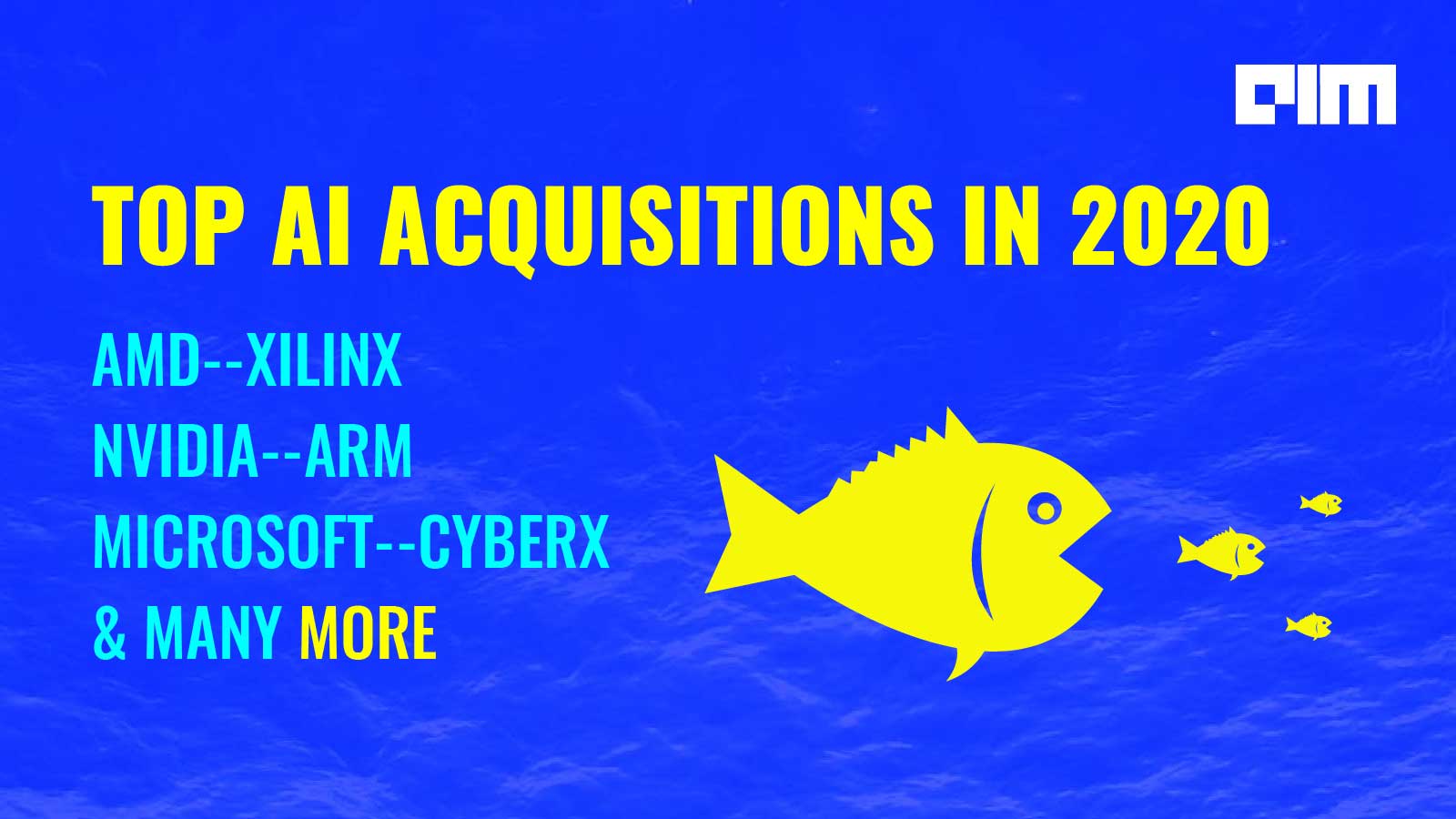 The technology landscape seems to have been relatively less affected by the COVID pandemic if one were to consider the various tech acquisitions that have taken place in 2020. This year was no exception to the trend of bigger companies buying out promising smaller startups to add to their AI prowess. We list some of the top major acquisitions of 2020.

In October, Advanced Micro Devices (AMD) announced its acquisition of Xilinx in an all-stock transaction that was valued at $35 billion. While AMD specialised in making chips for personal computers especially gaming PCs, Xilinx’s highly-flexible programmable silicon which is enabled by its entourage of advanced tools and software drive rapid innovation across a variety of industries and technologies.

NVIDIA in September said that it would be acquiring Arm Limited from SBG and the SoftBack Vision Fund through a transaction worth $40 billion. Arm’s common architecture supports diverse AI applications. It interconnects mega compute power in the data centre to the machine learning processors for AI algorithms in the edge point devices such as wearables and sensors. NVIDIA, which had been already eyeing the self-driving, 5G, and edge computing industry for a while, and is expected to step as an official key player in the global markets with the acquisition of Arm.

Touted as one of the most talked of acquisitions of the year, the intelligence-led security company FireEye acquired cybersecurity investigation automation company Respond Software in November, this year. The deal was closed at $186 million in cash and stock. Intelligence-led security company FireEye offers a single platform for innovative and simple solutions against cyberattacks. With this acquisition, the company now aims at tapping Respond Software’s Mandiant Advantage platform and its cloud-based machine learning tools and software that can drive faster outcomes and provide better security solutions.

In another high-profile acquisition of the year, chipmaker Nvidia acquired Israeli-American computer networking products supplier, Mellanox Technologies in April. The deal was closed at an amount of $7 billion. Notably, the deal was supposed to be completed almost a year back in March 2019 but was delayed owing to necessary approvals. This acquisition will help address the challenges and demands for consumer internet services, application of AI to data science in the cloud and edge computing, better utilisation of computing resources, and cost-effective operation.

In June, Microsoft acquired Israeli cybersecurity startup CyberX. This startup provides an IoT/OT cybersecurity platform built by blue-team experts. CyberX was founded in 2013, CyberX quickly grew in ranks and had raised about $48 million before finally being acquired by Microsoft. Notably, this acquisition was also part of Microsoft’s increasing footprint in Israel, which had acquired at least seven more businesses in the last decade. Experts had estimated that with CyberX under its wings, Microsoft would adopt a simpler approach to unified cybersecurity governance in IT and industrial systems to drive end-to-end security across managed and unmanaged IoT devices. This would help companies in quicker detection of advanced threats in increasingly converged networks.

Microsoft made another major acquisition in May this year when it acquired UK-based robotic process automation company Softomotive. Microsoft had then stated that it would be looking at using Softomotive’s robotic desktop automation tools WinAutomation and ProcessRobot for building software robots and enterprise RPA platforms. The announcement was made at Microsoft’s annual event Microsoft Build 2020.

In October, Apple bought Spain-base AI video startup Vilynx for approximately $50 million. Vilynx is known to build software to analyse a video’s visual, text, and audio content to understand what’s really in the video, using computer vision. It then leverages this data to categorise and tag metadata to videos as well as generate automated video previews and recommend content to users. As per experts, Apple’s various offerings such as Apple TV, Music, News, media, Siri, search, Photos, and other apps would possibly be revolutionised with Vilynx’s technology.

Right at the beginning of 2020, Apple announced its decision to acquire Seattle-base artificial intelligence company Xnor.ai. The startup founded in 2016 had made huge gains by building tools that help AI algorithms to run on devices directly rather than data centres. Notably, Apple has been pushing to run such software on its devices to maintain data privacy and for speeding up processing. The cost of this deal was estimated to be up to $200 million.

In May, Intel Corporation announced that it had acquired Israeli-base Moovit for approximately $900 million. Moovit provides real-time updates to ride-sharing service users. It combines information from public transit operators and live information from the user community. This data is then made accessible to commuters to offer them a real-time picture of the best route for their journey. Notably, from 2018 to the time it was acquired by Intel, Moovit’s user base had grown seven times.

Just recently in November, Intel acquired another Israel-based company Convrg.io, .to strengthen its machine learning and AI capabilities. Founded in 2016, Cnvrg.io offers data scientists a platform to build and run machine learning tools that can be used to train, run comparisons, and recommendations, among others. As per reports, even after acquisitions, Cnvrg.io was touted to exist as an independent Intel company that would continue serving its existing customers. The financial terms of the deal were not made publicly available.

In May, Cisco Systems announced that it would be purchasing ThousandEyes, a network intelligence company. The deal that was reportedly worth $1 billion is expected to allow Cisco to expand its cloud infrastructure. As per the company release, the new acquisition will function under Cisco’s Networking Services run by Todd Nightingale. It will help Cisco remove the delineation between public and private networks.

By May, Accenture made another high-profile acquisition. This time it was a big data analytics company named Byte Prophecy. This will help Accenture address increasing demand for enterprise-scale artificial intelligence and digital analytics. With Byte Prophecy, Accenture hoped to improve the speed and agility of delivering advanced analytics and AI solutions. It is estimated that with this acquisition, it would be able to add about 50 data science and data engineering experts with a focus on insight automation.

Cloud services vendor VMware acquired Nyansa in February this year to enhance its AI and analytics capabilities. Nyansa deploys AIOps that uses artificial intelligence to automate the identification and resolution of IT issues in real-time. VMware said that Nyansa’s technology would help the company to deliver improved network visibility, as well as monitoring, and remediation to its VeloCloud SD-WAN platform. This is expected to make it easier for customers to operate and troubleshoot network disruptions.