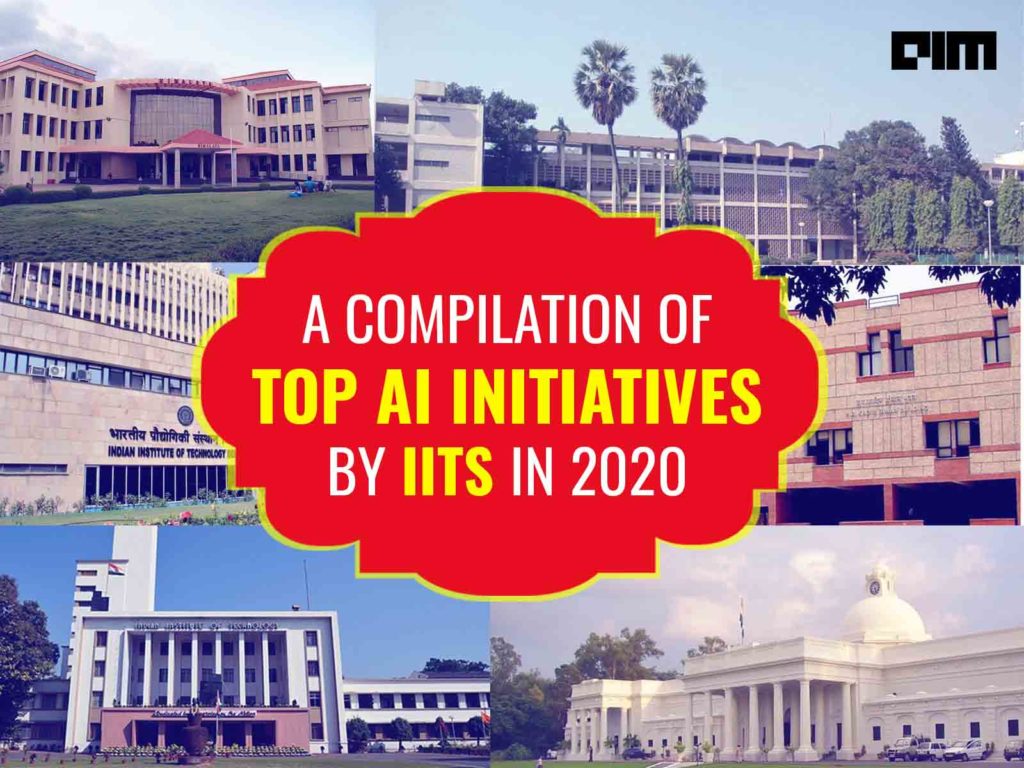 When it comes to innovations in AI, Tier-1 institutes such as IIT have been trying to leave no stone unturned. IITs have been performing a lot of research work in the field of emerging technologies like AI, machine learning, blockchain, among others. The institutes are also joining hands with the government and various other prominent organisations to launch the Centre of Excellence (CoE), Research & Development Centres (R&Ds), among others.

In this list, we have curated the top AI initiatives, in no particular order, by IIT in the year 2020.

In January, Indian Institute of Technology, Kharagpur has evolved an AI-aided method to read legal judgements. This AI approach has been created to point out the laws which are being violated. For the solution, the researchers at IITK used two deep neural network models to learn the rhetorical roles of sentences in a legal case judgement.

In November, the institute developed a low-cost AI-based solution for real-time metrological inspection. It consists of a low-cost imaging device as well as an AI-enabled software that can be deployed in the production line to check the quality of the jobs.

The same month, the institute has also announced setting up an AI and machine learning innovation hub — IIT Kharagpur AI4ICPS I Hub Foundation. The hub is focused on translating academic research to industrially scalable products and processes, focusing on AI interventions to Cyber-Physical Systems (CPS).

In April, Indian Institute of Technology, Kanpur offered free statistics courses in assistance with professor Shalabh in order to help students stay productive amidst lockdown. The courses included regression analysis, sampling theory, design of experiment and analysis of variance, linear regression analysis and forecasting, introduction to R software, among others.

Not far behind is IIT Mandi, which in March has managed to receive ₹7.25 crores from the Department of Science and Technology to build a technology innovation hub at the institute. The innovation hub is said to focus on human-computer interaction research.

In December, IIT Mandi again joined hands with the Technical Innovation Hub and WileyNXT to launch two six-month executive courses, which are Professional Certification courses in applied AI and full-stack development. The courses will begin accepting applications from next year. These courses are aimed at early career professionals who are looking at building a career in artificial intelligence and analytics.

Another initiative was launching an online BSc degree program in data science in August, that claims to produce graduates who will be employable in the sector that presently has high demand – programming and data science.

In September, IIT Madras developed AI models and datasets to process texts in 11 Indian regional languages. For this project, the institute joined hands with AI4Bharat, which is a platform for building AI solutions for problems that are relevant to India.

The following month, the researchers at the institute developed an AI and deep learning algorithm, known as AISoft. Aiming to address engineering problems, this algorithm has been designed to assist in the fields of thermal management, semiconductors, automobile, aerospace and electronics cooling applications.

IIT Roorkee has also participated in advancing AI for many applications. One of such is partnering with US-based CloudxLab to launch an Advanced Certification Course on Deep Learning. This course enables students – as well as professionals – to upskill themselves while being homebound.

Post that, in July, the IIT Roorkee collaborated with WileyNXT and announced the launch of AI in banking programme. According to sources, ‘AI in Banking’ is a four-month programme that has been designed for existing as well as recently-graduated technology and finance professionals, who aspire to build a career in artificial intelligence and analytics in the banking domain.

In August, IIT Roorkee partnered with Coursera, to launch two new certificate programs — one in artificial intelligence and machine learning, and the other one in data science. The six-month certificate program in AI and ML consists of video lectures, hands-on learning opportunities, team projects, tutorials, and workshops.

Following that, the institute collaborated with TSW, the Executive Education Division of Times Professional Learning to launch a PG Certificate Programme in Data Science and ML. The programme is designed for working professionals to expose their knowledge in machine learning and other related technologies.

Recently, the institute has once again joined hands with WileyNXT to launch another PG certification course, but this time for digital business and eCommerce. The course has been specifically designed for students studying engineering, bachelor and masters of technology, computers and keen to build a career in digital business platforms.

In the series of launching AI and data science courses, in February, IIT Delhi has also joined in with its new master’s programs — MSc in Cognitive Science. According to the institute, this program would be extremely interdisciplinary that includes building on theories and methods from AI, neuroscience, among others.

The institute has further established an independent School of Artificial Intelligence (ScAI) on its campus, in September, that will commence its PhD program from the next admission cycle, i.e. January 2021.

Similar to IIT Mandi, in February this year, IIT Bombay joined hands with Bank of Baroda to set up an innovation centre. The innovation centre is aimed to focus on strengthening the relationship between the BFSI sector with emerging technologies.

In association with TalentSprint, in February, IIT Hyderabad announced the second cohort of Professional Certification Program in Artificial Intelligence and Emerging Technologies for college students and young professionals. This is a six-month program which includes a five-week boot camp at IIT Hyderabad with residential options.

Along with that, the institute collaborated with NVIDIA to launch a technology centre — NVIDIA AI Technology Centre (NVAITC), in order to accelerate research and commercial adoption in artificial intelligence.

In the month of June, IIT Ropar also joined hands with TSW and launched a Post Graduate Certificate Programme in Artificial Intelligence & Deep Learning. The programme has a duration of six months and classes are for weekends with live online instructor sessions by IIT-Ropar faculty and notable industry experts.

Lastly, in June, IIT Gandhinagar developed an artificial intelligence-based deep learning tool for detection of the notorious virus from X-ray images. This developed online tool indicates the probability if a person is infected with COVID-19.